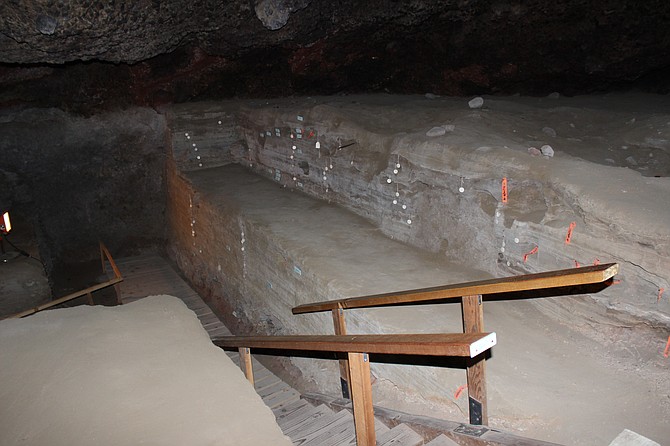 Tags imbedded in layers of soil record information noted by archaeologists during an earlier study of Hidden Cave near Fallon. Richard Moreno

Tucked into a hillside — you don’t see it until you’re practically standing on top of it — it’s easy to see how Hidden Cave got its name.

Located about 12 miles east of Fallon via U.S. 50, the cave was discovered in the mid-1920s by four local boys, who were searching for lost treasure. One of the boys found the cave’s narrow opening and the four soon began using it as a secret hideaway.

In the 1930s, a guano miner named McReilly found the cave, which was thick with bat droppings (guano) and began removing it. At the time, he reportedly complained that the digging would be much easier “if it weren’t for all the Indian junk” in the cave. That report reached Margaret “Peg” Wheat, a lifelong Fallon resident, who was also an archaeologist. She visited the site and immediately recognized it as something special.

Wheat invited Mark R. Harrington, an archaeologist who had excavated Southern Nevada’s Lost City and Gypsum Cave sites, to take a look at the cave. While searching for the small opening to the cave, Harrington is said to have remarked that “this is certainly one hidden cave” — which is said to be how it was named.

Harrington was sufficiently impressed by Hidden Cave to recommend that it be studied further. In 1940, S.M. and Georgetta Wheeler, associates of Harrington’s, began formal excavation of the site on behalf of the State Highway Commission.

Writing about the dig, contemporary archaeologist David Hurst Thomas has described the Wheelers as “exceptional” archaeologists who excavated the site with great care and skill. The two uncovered more than 1,500 prehistoric artifacts, which became part of the Nevada State Museum collection.

Following the Wheelers’ dig, the site was closed off with a heavy iron gate — which vandals soon destroyed — and was largely ignored for more than a decade. Wheat, however, didn’t forget about the cave and in 1951 persuaded geologist Roger Morrison to study the site. Morrison and two archaeology students spent two months at the site collecting additional data.

During the next two decades, interest in Hidden Cave again waned and it was picked over by relic hunters and vandals. In 1971, however, the Bureau of Land Management nominated the cave and surrounding Grimes Point area (home of many petroglyphs) to the National Register of Historic Places.

In the late 1970s, the site was studied extensively by a team of archaeologists working with the American Museum of natural History in New York City and the University of Nevada.

Today, regular guided tours of the cave, which is otherwise closed to the public, are offered by the BLM. The Hidden Cave Interpretive Trail, which leads to the cave, passes by more than a dozen points of interest including other caves.

The tour begins at a parking lot below the cave. The trail winds up a narrow trail before stopping at Picnic Cave, a tufa-encrusted shallow opening in the rocks. Picnic Cave’s unusual formations were created thousands of years ago when the entire area was underneath ancient Lake Lahontan. Studying the open expanse below the cave, it’s possible to see the horizontal lines in the rocks that indicate earlier water levels.

The trail continues to wind up the hillside, passing by Burnt Cave and other interesting stops (even a number of petroglyphs) before reaching Hidden Cave. A massive metal door, which protects the cave, swings open to reveal the narrow entrance. An electric generator is turned on and the interior is suddenly bathed in light.

Hidden Cave is considered a significant historic site because it apparently served as a storage place for prehistoric tribes who camped in the area. Inside, archaeologists have found fishing nets (remember, the cave was surrounded by water at the time) as well as stone tools, weapons and stored seeds and nuts.

The other fascinating thing about the cave is the way it has been preserved as an archaeological dig site. The walls are tagged with small markers indicating the various stratum, which show their age. It’s definitely worth a visit.

Guided tours of the site, as well as of nearby Hidden Cave, are available through the Churchill County Museum in Fallon. For tour information, go to www.ccmuseum.org/hidden-cave-tours/.