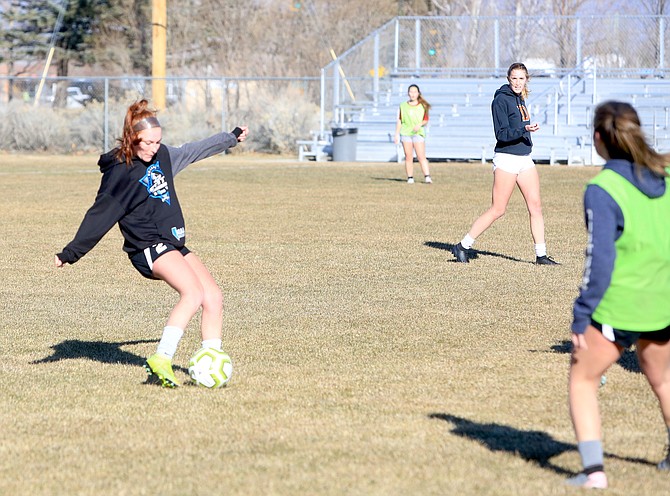 The Douglas High girl’s soccer team won’t have a shot at returning to the state tournament this year, but that’s due to circumstances completely outside of their control.
Instead, the Tigers will be tasked with trying to claim the top spot in the north in eight regular season games before potentially playing in a regional tournament to end the six-week season.
Head coach Andrew Robles expects to see some rust after the fall sports season was moved from late August to mid-February, but he’s expecting that across the board.
“I’m excited for our senior class. A few of these girls played basketball as well,” said Robles. “The main thing is getting those seniors playing. Then, in my competitive nature; it’s go time.”

Finding the starting XI
Robles, much like most coaches, will tell you it’s next to impossible to directly replace individual seniors.
The Tigers will be tasked with replacing more than one or two impactful players after seven seniors from last year’s team signed to play soccer at the collegiate level.
Douglas will be without graduates Madi Smalley (2019 offensive player of the year), Molly Coverley, Vaneza Diaz, Tess Sando, Colby Bera, Tara Dragoo and Ariana Bilderback.
Even with a large senior class gone from the Tigers’ past season, Robles has his eyes on up-and-coming players after his junior varsity team went undefeated in its last season.
“We did graduate a lot of seniors, but the good thing is these girls train together. They’re ready,” said Robles. “We want to take first place in league.”
Juniors Bailey Rozier and Campbell Dedmon both saw plenty of minutes on the turf in their sophomore campaigns.
“I think they could surprised some people,” said Robles. “They’re good. Bailey led us last year as one of our only sophomore who made varsity last year.”
Rozier earned second team all-league consideration as a sophomore.
Defensive standout Kennedy Cole will be back for her senior season after taking first team all-league honors as a junior.
Behind Cole will be all-league honorable mention keeper Madelyn VonAhsen, who made several saves in penalty kicks last year to send Douglas to the state tournament.
“She was up there,” said Robles on VonAhsen’s campaign for goalkeeper of the year in the Sierra League.
Back for the Tigers will also be seniors Kamryn Harper and Hannah Shaw, both of which saw action in the lineup last season.
Harper has already penned her commitment to Truckee Meadows Community College to continue her soccer career, following her final season in black and orange.

League outlook
With a condensed season and nearly 16 months of offseason, Robles’ two contending teams for the top spot this season are his Tigers and Galena.
However, the second year varsity head coach expects to see some surprises from around the area.
“It’s different this year because they took off some teams. It’s going to be close,” said Robles. “A tie is really going to make an impact.”
A majority of Class 4A schools moved up to Class 5A due to NIAA realignment, which merged into one league/region.
Competing with Douglas this season will be Reno, Carson, Galena, Bishop Manogue, Reed, Spanish Springs, Damonte Ranch and McQueen.

Wooster and Hug were dropped to Class 3A.