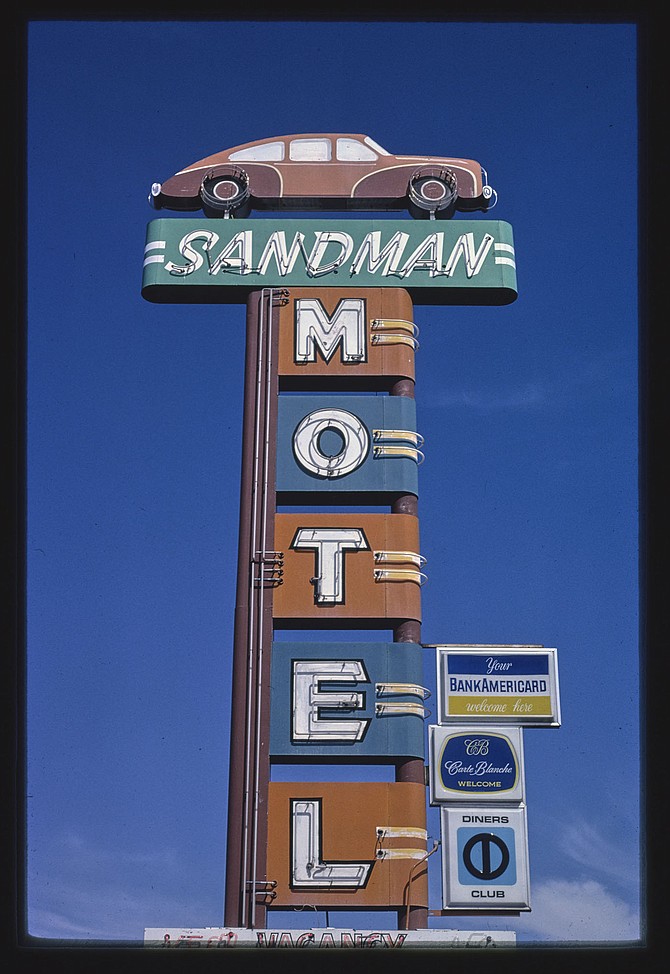 Sign for the Sandman Motel on Fourth Street in Reno, one of the places that crop up in novels set in Reno.

One thing that can be said about the Biggest Little City in the World is that it’s long fascinated novelists.

Almost from its earliest days, the railroad town on the Truckee River caught the attention of noteworthy fiction writers ranging from Walter Van Tilburg Clark to Cornelius Vanderbilt Jr.

Nearly all of the early authors, including Clark and Vanderbilt, focused on the city’s thriving divorce trade, a topic that intrigued and titillated readers. Many, in fact, came to Reno to obtain divorces and decided to write about their new, albeit temporary, homes.

More contemporary writers, such as Willy Vlautin and Claire Vaye Watkins, have found inspiration in the down-and-out characters that, in more recent years, have populated the fading motels and dilapidated neighborhoods near the city’s core.

Perusing those works, however, it is possible to get glimpses of real places, both past and present. For instance, Vanderbilt’s novel, “Reno,” published in 1929, is set in that time and paints a vivid portrait of the community in the late ‘20s:

“It was not the mountains to the West, nor the desert toward the East, however, that challenged Dick’s interest as he strolled about the town. First of all, it was the people, swank Easterners who might have been right off Fifth Avenue, rubbing elbows with silent taciturn men from the mountains and the garrulous, gregarious ‘rats from the desert.

“Another feature Dick noted was that the town was bisected by Virginia Street, running North and South, and by the Truckee River, running West to East. And running was the proper word, it was a roaring, turbulent river of pure mountain water tumbling right through the city’s heart.”

A bit later in the novel, Vanderbilt described the city’s downtown:

“Virginia Street, too, was a surprise. The broad pavement upon which were diagonally parked myriads of cars—not Fords and Chevrolets—as one might expect, but high-priced cars, many of foreign make—was flanked by substantial brick stores.”

Vanderbilt, a member of one of America’s richest families, came to Reno in 1927 to obtain a divorce, then returned to live in the city in the 1950s. His “Reno” novel was made into a movie in 1930, starring Ruth Roland.

In 1945, Reno was the setting for one of acclaimed writer Walter Van Tilburg Clark’s work, “The City of Trembling Leaves.” Clark became famous, in 1940, with the publication of his classic western novel, “The Oxbow Incident” (also made into a movie, in 1943).
In the book’s preface, Clark, who lived in Reno and Virginia City for many years (and taught at the University of Nevada, Reno for many years), stated that his book was not only a story about the lives and loves of the main character, but “indirectly, a token biography of Reno . . . Now, whatever else Reno may be, and it is many things, it is the city of trembling leaves.”

He went on to write: “The trees of the Wingfield Park-Court Street region dispense an air of antique melancholy. You become sad and old as you walk under the trees, even on a bright, winter day when all of the leaves are gone and the branches make only narrow shadows across homes covered with sunlight.”

Clark described the Court Street trees and took his readers to other downtown Reno neighborhoods including the Mt. Rose Quarter, the McKinley Park area, University Terrace, and up to the University of Nevada.

Two more recent works that spotlight Reno include Willy Vlautin’s “Motel Life” and Claire Vaye Watkins’ “Battleborn.” In his debut novel,
Vlautin, who lives in Portland but was raised in Reno, penned a compelllng story about two down-and-out brothers who spend much of their time living in motels on Reno’s Fourth Street.

In addition to including small drawings of various motels on the street, such as the Sandman Motel and the Sutro Motel, the book, published in 2006, mentions Horseman’s Park, St. Mary’s Hospital, and the Halfway Club.

“I walked around for a long time, down Virginia Street then along Second Street and Center Street. I went in and out of Harrah’s and the Fitz and the Eldorado and the Cal Neva. When my feet began to get cold I finally went back to my room,” Vlautin wrote in one chapter.

In a short story in her book, which is titled, “Ghosts, Cowboys,” Watkins, who studied at the University of Nevada, Reno, provided her portrait of Lake Street in downtown Reno:

“Ten years ago, Lake Street—the last surviving vanity landmark of poor Myron Lake, site of Reno’s original iconic arch (you know it, Biggest Little City in the World)—was lined with slums: dumpy neglected mansions with fire escapes grafted to their sides, bedsheets covering the windows, most of them halfway houses. But soon people were calling Lake Street and the surrounding neighborhood Newlands Heights.”