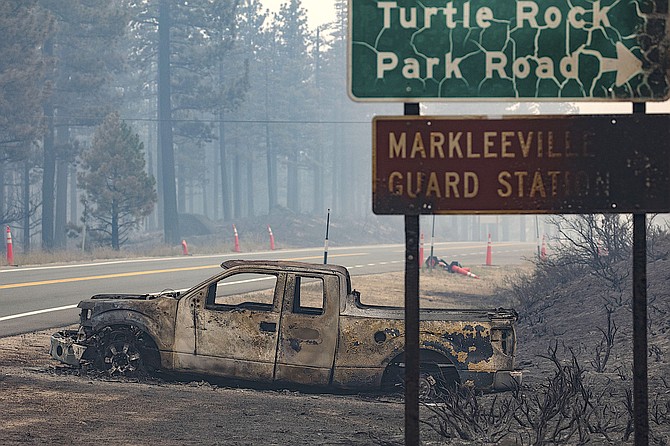 A truck that was parked along Highway 89 near the entrance to Turtle Rock Park was destroyed in the Tamarack Fire on Saturday night.
JT Humphrey | Special to The R-C

A fundraiser for a Markleeville family on Gofund me raised nearly $38,000 over two days for a family of four who lost their home to the Tamarack Fire.

Chris and Marshauna Mikelionis were renting the home and lost everything, according to the page set up by Grass Valley resident Stephanie Vidoli.

The page is one of three set up so far on the fundraising application.

Former resident Elissa Galvez said her parents’ home was destroyed in the fire leaving them and her three siblings homeless.

As of Tuesday morning, a search for the Tamarack Fire on Gofundme showed three fundraisers, including an assistance fund for Alpine County residents evacuated from the fire that has almost reached its goal on Tuesday morning.

“With your help, we can assist the evacuees in meeting basic needs while fire suppression efforts are underway as well as establish funds to help evacuees return to their homes, and for those who have lost homes or had their business shut down, we can help them rebuild,” organizers said.

The closet is open 12:30-4 p.m. Monday, Tuesday, Wednesday and Friday and is located on Waterloo Lane south of the evacuation center at the Douglas County Community & Senior Center.

Markleeville residents were joined by those in Mesa Vista on Monday, as evacuations ahead of the fire continued.

The Nevada Fire Information mapping page showed the fire was at 42,000 acres on Tuesday morning, and headed north toward the state line.

State of CA should pay for failing to put out fire immediately on July 4th!