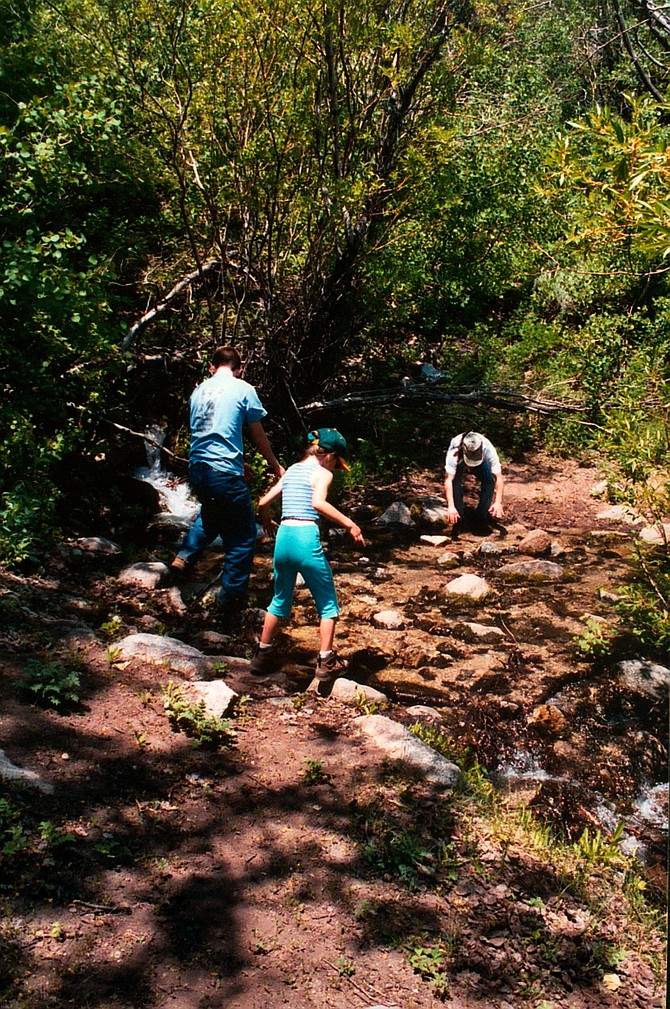 Hiking along the Singas Creek Trail in the Santa Rosa Mountains north of Winnemucca.

The two best things about hiking the Santa Rosa Mountains north of Winnemucca are that the scenery is spectacular and you can often walk for hours without encountering anyone else.

The Santa Rosa-Paradise Peak Wilderness area encompasses about 31,000 acres along the crest of the Santa Rosa Range, which is only about 30 miles north of Winnemucca.
The range has been described as a “forgotten island of wilderness” by nature writer Michael C. White. It boasts one of the largest waterfalls in Nevada at Falls Canyon as well as several majestic peaks that are more than 9,000 feet high (Santa Rosa Peak, 9,701 feet; Paradise Peak, 9,443 feet; and Singas Peak, 9,415 feet).
While there are about a half-dozen major trails leading into the wilderness area, one of the most accessible routes is the Singas Creek Trail on the eastern side of the range (on the Paradise Valley side).
To reach the Singas Creek trailhead, drive about 22 miles north of Winnemucca on U.S. 95, then turn right on State Route 290 (the road to Paradise Valley). Continue for about 17 miles to the signed turnoff for Singas Creek Road.
Turn left on Singas Creek Road (the Ranch 3C owned by Dave and Tom Cassinelli is adjacent) and follow the dirt road for about six miles and park at a wide turnaround. A high clearance vehicle is required.
You start by climbing a small hill and winding through the sagebrush on a narrow trail. About 100 feet or so from your starting point, you’ll pass a wilderness area sign.
The trail follows an old roadbed and passes through shady groves of aspens and clumps of sagebrush and wildflowers.
The path grows steeper as you climb higher into the range. Soon, you reach a small, seasonal stream that in the spring and early summer months gurgles from the hillside and spills across the trail. The sound is relaxing and the setting is quite peaceful.
You continue through the often-dense vegetation. If you look behind, you can catch views of Paradise Valley, named, according to local stories, when a prospector named W.B. Huff arrived there in the 1860s and, impressed by the region’s beauty, exclaimed, “What a paradise.”
The Santa Rosa range was apparently among the earliest mountains in Northern Nevada to be explored. Trapper Peter Skene Ogden led an expedition into the range in 1829 while searching for any rivers that might contain beaver colonies.
If you continue climbing on the trail to higher elevations, you pass out of the aspen forests and traverse less vegetated slopes. The trail drops down into a depression created by Moray Creek, crosses several more small season streams before beginning the up and down climb to the Summit Trail (about a half-mile from the starting point) that runs along the crest of the range.
The nice thing about the Singas Creek Trail is that you can hike as much as you want. If you continue on the Summit Trail, you can cross over the range and exit at a trailhead on the west side at Buffalo Canyon, although that’s an all-day or even overnight hike.
Other fairly easy hiking trails found in the Santa Rosa range include:
• North Hanson Creek – This is the only other major trail accessed from the eastside of the range. The trailhead can be found by following the same directions as those to Singas Creek Road, except instead of turning onto that road continue north into Paradise Valley.
Take a left at the main intersection in town and continue 1.5 miles to the end of the road. Turn left on a dirt road and go a half-mile, then turn right on a dirt road and follow the fence line. Continue into the foothills until you reach a fork in the road. Cross a creek to the west and drive to a parking area. Then, starting hiking.
• Falls Canyon – This trail, like a handful of others that are much longer and/or more difficult (such as Rebel Creek, McConnell Creek, Horse Canyon and Buffalo Canyon) is found along the western side of the Range, off U.S. 95. To reach the trail, drive 38 miles north of Winnemucca on U.S. 95, then turn right at the sign for Horse Canyon Road. Continue 3.5 miles to a parking area. There is a waterfall at the end of the trail.
Good sources of information about the Santa Rosa-Paradise Peak Wilderness are “Nevada Wilderness Areas and Great Basin National Park, A Hiking and Backpacking Guide” by Michael C. White and “The Hiker’s Guide to Nevada” by Bruce Grubbs.