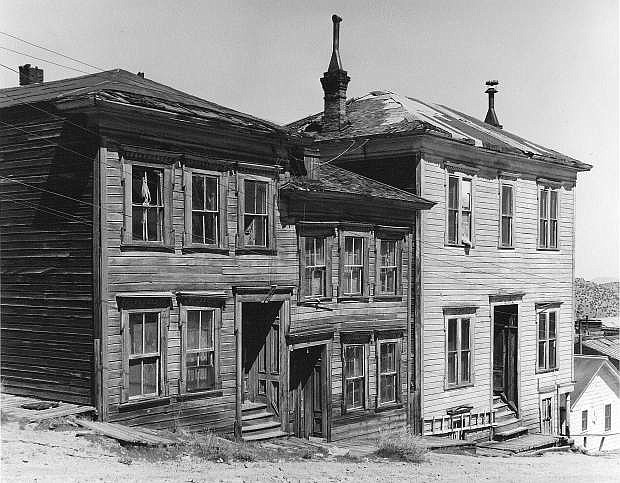 Wednesday
150 Years Ago
Ball at the Lake: There will be a grand opening ball given by Thomas Roland, proprietor of the Lake House, at the head of Lake Bigler on August 18th. Music, an elegant hall, fine supper, prettiest girls, cool evenings and one of the loveliest spots on earth will contribute to the enjoyment of attendees. Walks, rides, boating, fishing and hunting may be indulged in the afternoon proceeding and morning following the ball.
140 Years Ago
Hoppers: Washoe valley folks report that the hoppers are becoming very discouraged and resolve not to invest any more eggs in Washoe soil. They are dying in large numbers and taking wing towards the west and south. Places which were covered with hoppers are now perfectly hopperless. (Gazette)
130 Years Ago
President Quayle, A. M., is one of the brightest young men in the United States. He will deliver a lecture at the Opera House and his word painting is something grand that flows forth like some beautiful song. Reserved seats may be had at Thaxters without extra charge.
100 Years Ago
Six operations: Six children were operated on for the removal of adenoids and tonsils. Dr. Shaw of Reno assisting Dr. Maclean of Carson. Little Agnes Caroline Bordewich, Jean Bonagous, the grandson of C. L. Deady and three children at the Orphans’ Home were the patients.
60 Years Ago
Advertising: “Carson City Nugget—Now Playing, ‘The Gadabouts’ in our Theater-Bar.”
20 Years Ago
(Photo caption) Bruce Bommarito is Nevada’s new tourism director. He considers Nevada an ‘easy state to sell’ because it has so many visitor-friendly attributes—everything from major resorts to historic ghost towns.
Thursday
150 Years Ago
Oiled the press: The pressmen were growing weary in running off the morning’s edition of the Register. Jas. Y. Spurgeon, the clever nocturnal mixologist of the Old Sazerac Saloon, sent over a “few” stimulants, which made the press run much easier and enabled the boys to get through on time.
140 Years Ago
In brief: President Garfield is still improving, but complains of being weak in the legs.
130 Years Ago
Eccentric individual: Mr. Zirn who is locator of the principal claim at Pine Nut, being the only claim which any work has been done, is an eccentric individual. He sleeps at night between two ‘Henry’ rifles and works in day time between two pistols. No one is allowed around his claim at any time.
100 Years Ago
Plant 40,000 trout: Black spotted trout were placed in Lake Tahoe on the Nevada side. The fish come from the hatchery at Verdi. They were placed in the big water as the sun went down and many of the guests at the resort witnessed the baptism of the finny tribe.
60 Years Ago
KOLO-TV Channel 8: Sunday—Heritage, NBC News, Walt Disney presents, Lawrence Welk, 20th Century, Leave it to Beaver, Sea Hunt, Dennis the Menace, Ed Sullivan, Naked City…
20 Years Ago
Paper swapping: In Los Angeles the Supreme Court has agreed to decide whether ‘swapping of students’ paper to correct them violates students privacy rights. Teachers who gathered at the National Education Association convention were divided on the issue — timely feedback versus students’ confidentiality.
Friday
150 Years Ago
Hatchet-Faro: The fellow who attempted to beat a faro game with a hatchet made a raid upon a party of young men who were enjoying themselves at the wooden circus and got the worst of it — coming off with a large-sized head, an elevated nose, and twenty days in the County Jail.
140 Years Ago
In brief: There is a man at the Mint who took the pains to count the bricks laid by a fellow workman to ascertain whether or not he was putting in his full time.
It transpires that the man who stole the chicken from the Orphans’ Home was from the Comstock. That is the conclusion arrived by officers after measuring the prints of his boots in the sand.
130 Years Ago
All sorts: Dr. Delmatius McClary, the wonderful seer, notifies the public that he will be at the Arlington House.
The Bellevue hotel at Tahoe will be lighted by electricity this week.
George Meyers expects to purchase Geo. T. Davis’ grocery business.
100 Years Ago
Shipping graphite: The dividend-paying mine of Ormsby county is the graphite deposit owned by Walter Chedic in Voltair, three miles from Carson City. Several carloads of graphite are being taken by carload for the plant at Richmond, California. Ten carloads during the year have been mined and shipped and the material converted into paint, grease compound and boiler cleaning material — one of the highest grade graphite deposits in the entire west.
60 Years Ago
Nightclubs: Protestant and Catholic clergymen took up a campaign at the pulpit against semi-nude nightclub acts. A survey by United Press International showed many protestant clergymen also condemned the shows in their Sunday sermons and asked that they be banned.
20 Years Ago
(Photo caption): Diane McCoy, area director for the Boys and Girls Club of Western Nevada, talks with members of the club. MCoy will serve as director of a satellite program to be launched in October at Empire Middle School. The program is aimed at improving grades.