A pink stripe of retardant is dropped from a fire tanker at around 12:30 p.m. Wednesday in this photo by Topaz Ranch Estates resident John Flaherty. Smoke from the fire has increased, but aircraft are still able to fly.

The Tamarack Fire officially crossed into Nevada early Wednesday as it continued to grow to 41,889 acres, according to the Nevada Wildfire Information map.

Smoke towered over the Highway 395 corridor through the Pine Nuts as the fire burned toward Double Spring Flat near Leviathan Mine Road.

Evacuations remain in effect for the area along Highway 395 south of Leviathan Mine Road to Holbrook Junction. Douglas County Search and Rescue is advising residents around Holbrook Junction to evacuate this afternoon. 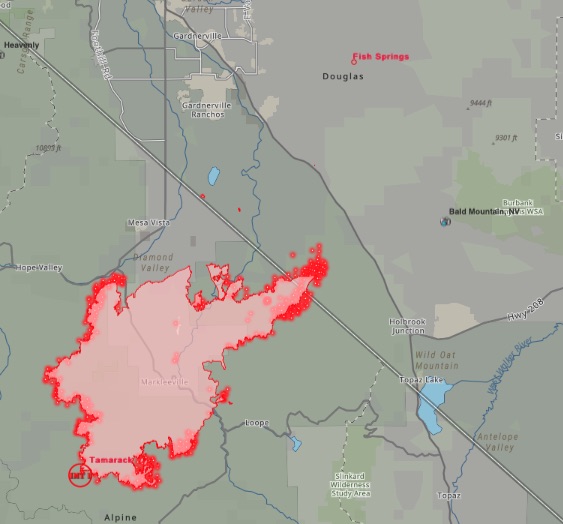 The Tamarack Fire burned into Nevada on Tuesday night.

The fire grew despite generally light winds, but that is unlikely to continue this afternoon, with southwest winds at 10-15 mph, gusting to 25 mph.

Fire crews have been cutting lines south of Highway 395 in an effort to get ahead of the fire.

Clear skies have enabled aircraft to weigh in on the fight.

Structure protection is being conducted for homes and China Spring, which fire officials are threatened by the blaze.

While clear conditions permitted fire aircraft to fly, they also are contributing to further drying out vegetation.

“Fuels are critically dry and fire indexes are at record levels,” officials said. “Fire spread to the northeast is anticipated.”

On the west side of the fire, firefighters are conducting structure protection and securing a line around Markleeville.

They’ll keep building fire lines to limit the spread north toward Highway 88, which remains closed at the Nevada state line.