The Nevada Traveler: Despite Nevada’s desert image, the state boasts some big trees 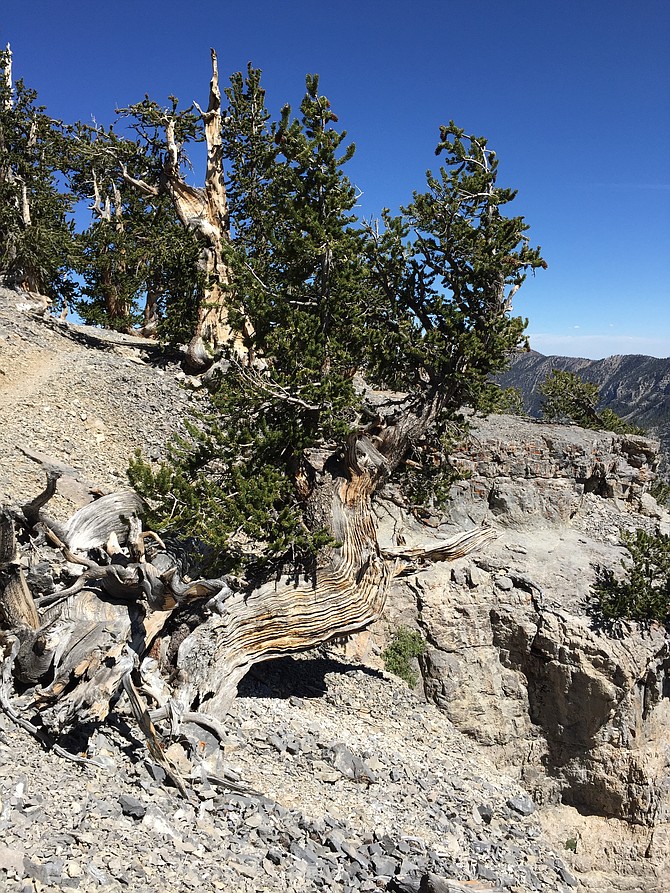 The state’s biggest Bristlecone pine tree can be found in the Mount Charleston Wilderness Area, outside of Las Vegas.

Traveler.jpg – The state’s biggest Bristlecone pine tree can be found in the Mount Charleston Wilderness Area, outside of Las Vegas. Photo courtesy of Famartin

The Nevada Division of Forestry’s State Big Tree Program has been identifying the largest specimen of every native and introduced tree species growing in Nevada since 1992.The division’s first register listed some 70 trees, which, with submissions from the public throughout the years, has grown to 303 tree species. Keep in mind that most of the state’s biggest trees are found on private property, so seeing them can be difficult.

The Division of Forestry notes that trees selected for the Big Tree list are compared on a point basis that includes not only height but circumference and crown spread. The measuring guidelines are set by American Forests, which maintains a national registry of big trees.

So, what are some of the biggest trees found in the Silver State and where are they found? For purposes of this article, I’ll only mention landmark trees found on public property.

Based on the register’s information, the tallest tree in the state appears to be a California Red Fir, which stands at 166 feet tall, found in Spooner Lake State Park. This tree also is a circumference of 248 feet.

Runner up is a Pacific Ponderosa pine tree, measuring 161 feet in height, that has been found in the Carson Range in Douglas County. This particular tree has a circumference of 275 feet, making it a pretty husky specimen.

Not surprisingly, several of the state’s big trees can be found on the University of Nevada, Reno campus, which long has nurtured tree specimens in its arboretum. Among the championship species there are the state’s biggest Ginkgo tree (62 feet tall), Japanese Flowering Cherry tree (43 feet tall) and the largest Northern red oak tree (89 feet).

Perhaps surprisingly, the biggest Bristlecone pine tree is not found at Great Basin National Park, which is famous for its Bristlecones, but at Mount Charleston near Las Vegas. This tree is also thought to have the largest circumference of any in the state, measuring 455 inches around or about 12 feet.

Great Basin National Park does have a couple of noteworthy trees including the state’s biggest white poplar (53 feet tall) and Curlleaf mountain mahogany (28 feet tall and 124 feet around).

The largest Western Juniper tree (74 feet high) is located in the Mount Rose Wilderness, along Bronco Creek while the biggest Washoe pine (117 feet high), a fairly rare species found only in the eastern slopes and foothills of the northern Sierra range, stands on Mount Rose.

To review the most recent roster of Nevada’s Big Trees, go to http://forestry.nv.gov/forestry-resources/nevadas-big-tree-program-2/.