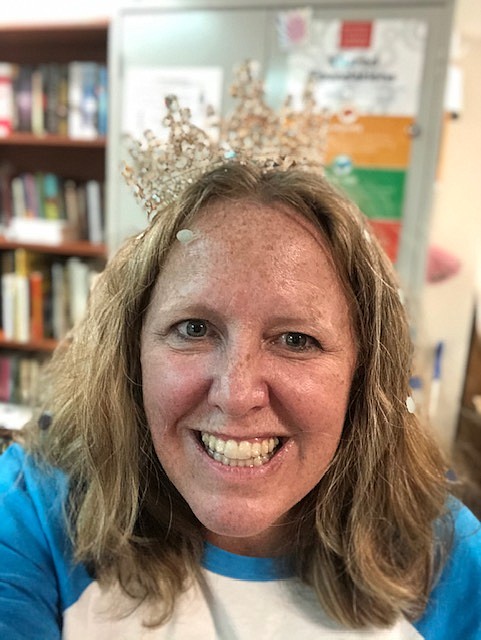 Congratulations to CHS’ Ananda Campbell on being awarded CHS Educator of the Year. “I was totally shocked!” Campbell said. “A couple of people were watching the staff meeting with me, and all of the sudden he [Principal Bob Chambers] said my name, and I did not even realize what he was doing, and there was confetti everywhere, and I got a crown on my head; I was completely shocked” Campbell added. Campbell then mentioned how past winners of Educator of the Year have been individuals she really admired, super qualified teachers. She also mentioned how she felt overwhelmed at the idea of being a part of this group of individuals. Campbell, who has been teaching for over 25 years, worked at Carson Middle School for 17 years before transferring to Carson High School. She mentioned having taught in Seattle, WA for a period of time as well. Campbell said about being the CHS Media Specialist and Carson City School District Library Coordinator, “I just love what I do.” Asked about why she chose education for a career, Campbell replied, “When I first went to UNR, I loved Psychology, and I thought I was going to get a degree in Psychology.” However, Campbell went on to say, “One of the classes I took involved an internship at an elementary school in Reno working with a school psychologist; eventually, I thought I really love working in schools, so I began pursuing education, and began teaching 1st and 2ndgrade at Freemont Elementary, then moved to Carson Middle, and now I am at Carson High.” Campbell said her inspiration to go to work every day is the students and working in the school library. She said, “Teaching in the school library means I have a great deal of flexibility, and I get to teach students exactly what they need when they need it; students who come in, come in because they want to be here, so I love working with the students every day, having lunch in here, talking with everybody, helping students with their individual research assignments, finding books, teaching in classrooms, so the best part of my job is being with students.” Ultimately, Campbell wants everyone to know, “I am a Carson High graduate, my dad graduated from CHS, my children [twins] will be the Class of 2026, and I want to say I bleed blue through and through; I have Senator Pride, and it means so much to me to be Educator of the Year at Carson High, the school I love so much.” Campbell, speaking about herself, added, “I am humbled to be a part of the long line of outstanding Educators of the Year, and I am honored to have the opportunity to advocate for libraries and literacy. As a Library Media Specialist, I work with the entire school community as a resource for everything from literacy and media instruction, edtech coaching, social emotional wellbeing, and professional development. My passion is educational equity and representation which pushes me to learn and grow as an educator. The honor of being selected as CHS Educator of the Year provides a platform for me to advocate for the library profession and to represent every quality professional of Carson High School.” 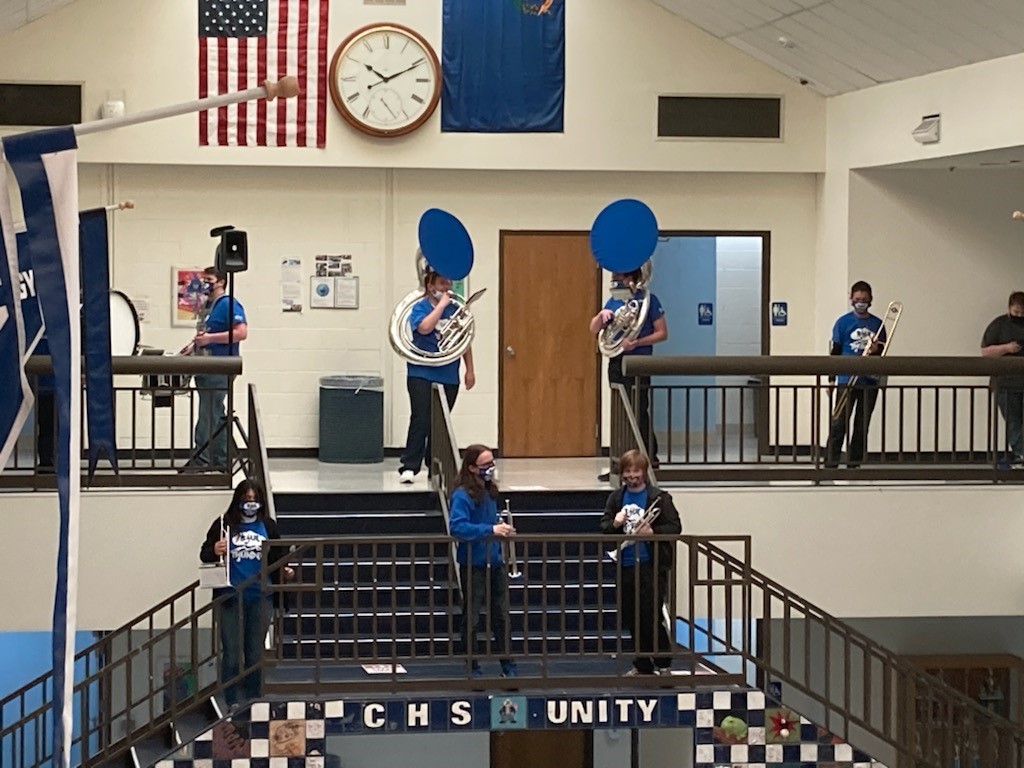 The Blue Thunder Marching Band kicked off its first home football game of the year with pep rallies March 18 and 19 at lunch in Senator Square. Band members were released at 10:50 a.m. CHS teachers are so excited to see life beginning to return to normal even though instead of a paper hallway pass, students used their Blue Thunder T-shirts and their Blue Thunder masks as their hallway passes. CHS teacher and Band Director Nick Jacques said, “I understand how critical your time is with our students, and I appreciate your support.”

The Carson City School Foundation and Greater Nevada Credit Union jointly brought in donuts for all staff members March 15. Though they did not hand deliver these sugar-filled pastries to each teacher’s classroom, they asked teachers to stop by the library any time after 8:15 a.m. to enjoy a deliciously free donut treat. As if that were not enough fun for a Monday, teachers met for prayer, as they do every Monday, Wednesday, and Friday, and the CHS Math Department partnered with the Senator Pride Committee to celebrate Pi(E) Day, which is actually March 14, where teachers were invited to “…come to the dark side for some pie.” National Pi Day recognizes the mathematical constant π. Also known as pi, the first three and most recognized digits are 3.14. The day is celebrated by pi enthusiasts and pie lovers alike. March 15, is actually called National Napping Day, the day after the return of daylight saving time. March 15 is also National Everything You Think is Wrong Day, National Kansas Day, National Pears Helene Day, and National Shoe the World Day. It is not difficult to believe in America, the freest country on the planet, every day is a celebration of something. 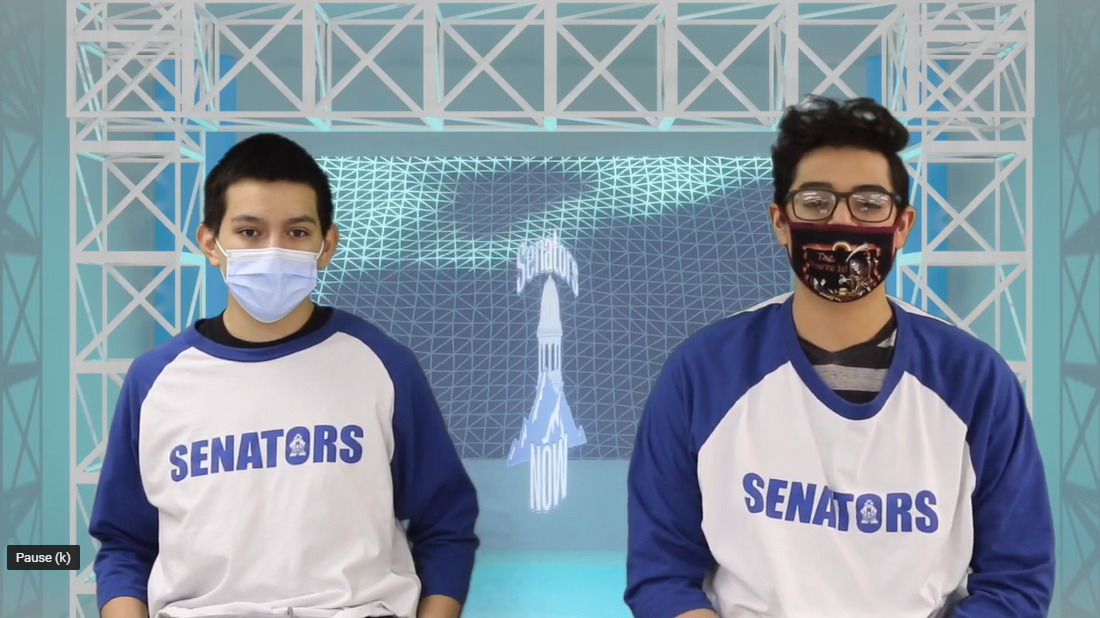 Has this ever happened before? For the first time ever, Carson City School District will host a Virtual Career Fair March 22 from 9:30 a.m. to Noon. There will be a variety of employers, work force programs, and local colleges participating. Please see the promotional video youtube.com/watch?v=zyvsR-ufz6s created by CCSD Work Based Learning Coordinator Marc Rodina. The VCF is for all CHS, PHS, CMS and EVMS students. It will also be placed on the Student Dashboard of students' Chromebooks. Teachers are pushing it out through their Google Classrooms as well and encouraging their students to attend. There will be several Dutch Bros. card prizes if students complete the survey. Access the Online Binder link by going to: docs.google.com/presentation/d/1WZaKxU5EqEYpgwk3kBtvHIwfe1J0wnq-i2zwnfBzY-Q/present?slide=id.p1. There are a few businesses that have not yet provided a Zoom link, and the Cover Page and survey are still in progress. For more details, call Career Center Specialist Susan Roman at 283-1797 or Work Based Learning Coordinator Marc Rodina at 283-2055.

SOMEONE WILL KISS THE GOAT FOR FUTURE FARMERS OF AMERICA WEEK

Simple enough, right? Future Farmers of America Week will feature both the Kissing of the Goat and the Dirtiest Truck Contest. The following teachers and administrators have been nominated, and to vote, students will use their cell phones to scan one of the many QR codes around campus. CHS Dean Shelby Tuttle, Principal Bob Chambers, Language Arts teacher Emilee Riggin, Freshman Seminar, Girls Strengthening, and Health teacher Angela Maw, Culinary Arts Kacey Kemmet, World History and Economics Kelly Hogan, American Government and Economics Angila Golik, and Geometry and Algebra’s Jordan Glover.

CHS will again, finally, be hosting another blood drive; however, it is open only to CHS staff and students, and an online appointment must be made using a QR code outside the classroom doors of both NHS advisers. The CHS National Honors Society won the Northern Nevada High School Blood Drive Challenge yet again and received a check for $3,000 from United Blood Services. A little known fact about one blood donation is it will save up to three lives. NHS’ first blood drive this year is March 25 and 26 from 8:00 a.m. to 1:30 p.m. Medical staff will be in the CHS Small Gym. Large numbers of donors are needed, and donors must be 16 or older. Anyone under 18 must have a signed parent consent form and a picture ID when they donate. Students may sign up by room #233 or #226. Snacks and drinks are also needed. Call teachers and NHS advisers Monica Flinchum, 283-1749, or Jennifer Alexander, 283-1720, for more information. 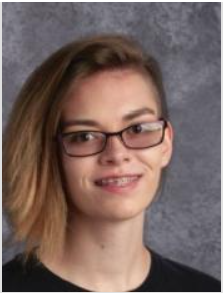 CHS Student of the Week is Ibis Hood, a senior

Congratulations to Ibis Hood, a senior, on being nominated as the CHS Student of the Week. CHS American Government, Psychology, and Martial Arts teacher James Franz, Ibis’ nominating teacher, said about her, “Ibis Hood Works hard in my Government class and has a 97% attendance, never misses, and is always ready to contribute.” Ibis’ teacher for second semester, CHS Economics, Honors World History, and AP Human Geography teacher Nicole Fagundes, said “I completely agree with Mr. Franz's nomination; Ibis continues to bring this A+ game to Economics in the second semester, she is engaged in her learning, and she is a positive leader in the classroom.” Employees within Carson City School District nominate the CHS Student of the Week, and it is often the students’ teachers who do the nominating though anyone in the district may do so by sending an email to pbrady@carson.k12.nv.us.

SENIOR IN THE SPOTLIGHT 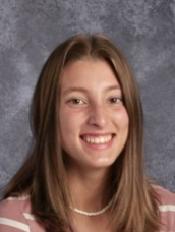 CHS Senior in the Spotlight is Trinity Harvey

In a year when most people are finding it difficult to complete everyday tasks, Trinity Harvey is taking on new challenges. Trinity is a triple threat, excelling in academics, extra-curricular activities, and even taking up a new hobby. For these reasons, Trinity is this week’s Senior in the Spotlight. Trinity’s weighted GPA is an impressive 4.4, which she earned by taking five honors and four AP classes. These classes are in a wide variety of subjects: Spanish, Trigonometry/Pre-calculus, Human Anatomy and Literature. She is also second in command in JROTC’ Military Science IV, which she believes helps her face difficulties created by Covid-19. “We’re trained to take on difficult challenges,” she explained. “It’s a good distraction because it keeps me busy; plus, it is a very supportive program” she added. While her academics keep her busy, Trinity manages to carve out time for a few other passions: competing in precision shooting on the JROTC rifle team, a team which just made it to nationals, and the marching band where she plays the trumpet. She also enjoys orienteering with the JROTC program, and she manages to eke out time to spend on her newest pastime, racing dirt bikes. She has been riding for six months and competed in her first race in Feb. Trinity plans to attend UNR next year and major in biology. She may become a biology teacher, or she is considering a career in the medical field. “I will most likely work with kids,” she said. Lieutenant Commander Dan Meyer, who has mentored Trinity in the JROTC program as well as on the rifle team, said she will be missed next year as she has been a positive influence on others. “Trinity is a compassionate person,” he said. “She has been an extremely important and effective leader in the NJROTC program.” ~ Contributed by CHS Counselor Michele Quintero.