The Nevada Traveler: The boom-and-bust-and-boom times again in the mining town of Silver Peak 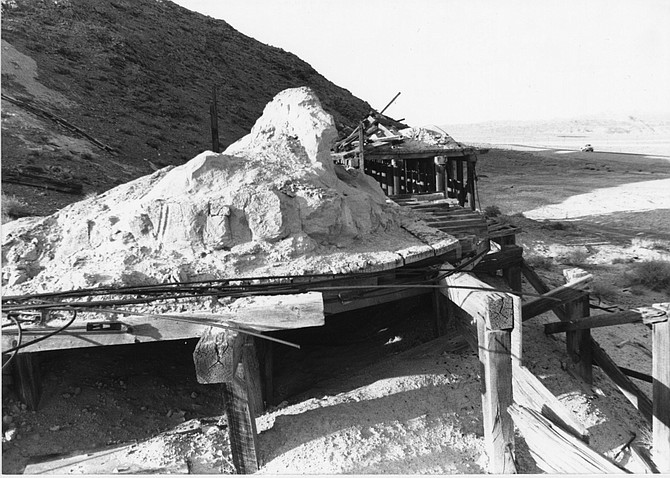 Abandoned mining sites, like this, can still be found littered about the historic Nevada mining town of Silver Peak. Richard Moreno

The mining town of Silver Peak, located about three hours south of Fallon, has experienced the highs, lows and now highs again of the mining industry.

Silver Peak is, in fact, one of the oldest mining communities in the state of Nevada. In 1863, miners from the Austin area discover gold and silver in the area, which touched off the first boom.

Within two years of the initial discovery at Silver Peak, a 10-stamp mill was erected, followed by the construction of a larger, 20-stamp mill constructed in 1867, and a town began to take shape.

The mill shut down in 1870 and the mines were sporadically worked during the next 30 years.
In 1906, the Pittsburg Silver Peak Gold Mining Co. reopened the area mines and built the Silver Peak Railroad to carry ore from a large mill at Blair (a mining camp located about three miles north) to the Tonopah and Goldfield Railroad line.

Silver Peak’s fortunes, however, were more down than up, and by 1913, the town lost its post office to more successful Blair. Silver Peak experienced another mining boom in the mid-1920s (it got the post office back in 1916, after Blair went bust), which produced more than $8.5 million in ore before cresting.

A potentially fatal blow was struck in 1948, when most of the town burned. A modern town began to rise from those ashes in the 1950s, with the discovery of large lithium deposits in the adjacent Clayton Valley.

It is the latter mining that is the source of the town’s current boom. Commercial lithium mining began in 1967, but it wasn’t until 2010 that the capacity was greatly expanded due to increasing demand for the mineral for use in batteries, including those used in electric vehicles and computers.

To visit the old town of Silver Peak, head south on U.S. 95, then go 21 miles south on State Route 265 (at a point about 30 miles west of Tonopah). As you turn off the highway, you face a long stretch of open road bordered by the Silver Peak Range on the right and the Weepah Hills to the left. In the distance, you can see the snow-capped Montezuma Range.

About 10 miles from the junction with Highway 95, the surrounding ridges take on a darker appearance, indicating the area's volcanic history. As if to verify that fact, the road passes right next to a large black collapsed cinder cone, with two additional cinder mountains visible in the distance.

From here, you can also see the expanse of Clayton Valley, including the massive lithium mining operations.

Just north of Silver Peak, you can find perhaps the best evidence of the older Silver Peak. Here, on both sides of the road, you can see the dilapidated remains of a few houses and stone buildings as well as the skeletal frame of a cyanide operation.

Additionally, a special treat is the remains of an old buckboard wagon, sans wheels, hidden in the sagebrush near one of the structures.

Passing through the center of the town, you can still see that some of the newer structures appear built upon the foundations and walls of older ones.

Perhaps the most impressive ruins in Silver Peak are the large stone walls of a large mill located on the side of a hill that rises immediately east of the center of town. The ruins date to the 1860s.

Surrounding the ruins is apparently the local junkyard, containing some older wooden shacks and buildings that appear to have been moved there from other locations.

An informative book about the people of Silver Peak is “Silver Peak: Never A Ghost Town,” by Victoria Ford. Using oral history interviews with many former Silver Peak residents, Ford crafts a profile of the mining community that residents fondly referred to as “The Peak.”
Silver Peak is located about three hours south of Fallon via U.S. 95.