Fallon shuts out Elko in a 3A East football game 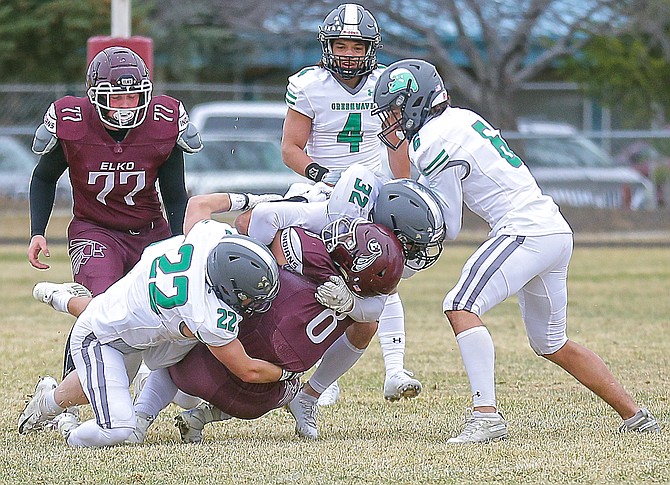 ELKO — Neither rain nor sleet nor snow could stop the Greenwave from making a same-day delivery in northeastern Nevada.

With winter-like conditions swirling at Warrior Field on the first day of spring, the Greenwave improved to 2-0 Saturday in the COVID-adjusted football season by shutting out Elko, 33-0.

Fallon completed its sweep against its Elko County foes after handing Spring Creek a 44-7 thrashing the preceding week at the Greenwave’s Edward Arciniega Athletic Complex.

Coming into the Elko game, Fallon had won nine out of the last 10 meetings between the two longtime rivals. For the past decade, though, Fallon has dominated its series with the Indians, and since Greenwave coach Brooke Hill began his stint on the sidelines, his teams are 9-3 against Elko. 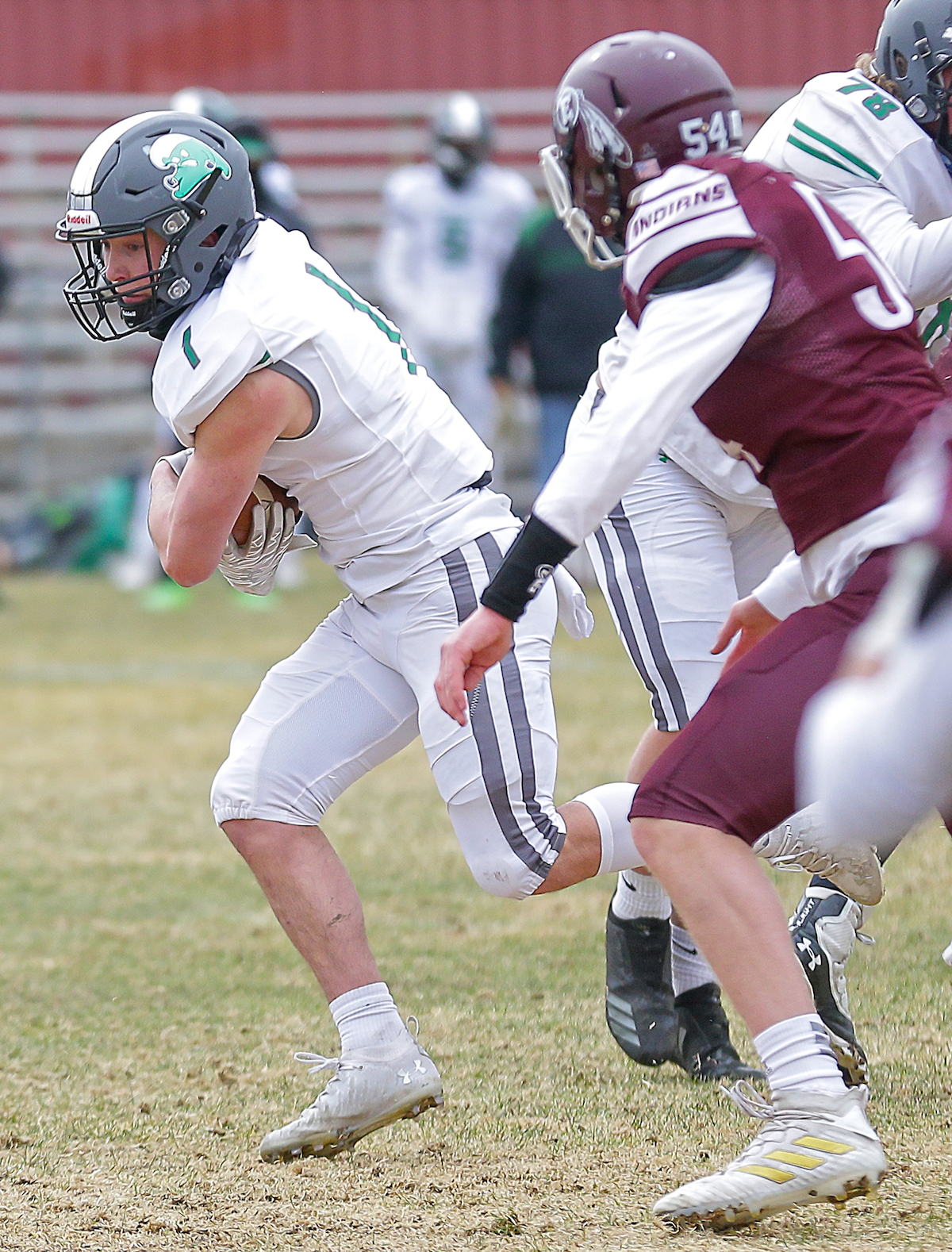 “Avery passed well, and Levi had a big game with three touchdowns for us,” Hill said.

Elko, however, kept Fallon from scoring in the first quarter although the Wave had a good opportunity within the red zone.

Hill said the wet field affected Fallon, but the Wave made some adjustments. He joked about the game going through four seasons.

The Wave took over on their 41-yard line and marched down the field in six plays. The next four plays within the 10-yard line couldn’t pushed the Greenwave into the end zone. Two running plays netted four yards, and an incomplete pass resulted in a third and goal from the 4-yard line.

The Elko defense chased Strasdin out of the pocket and then out of bounds with less than 2 minutes remaining in the first quarter.

“We kind of shot ourselves in the foot,” Hill said.

The next quarter delivery options arrived for the Wave.

Fallon came by land and air in the second quarter to break open the stalemate. 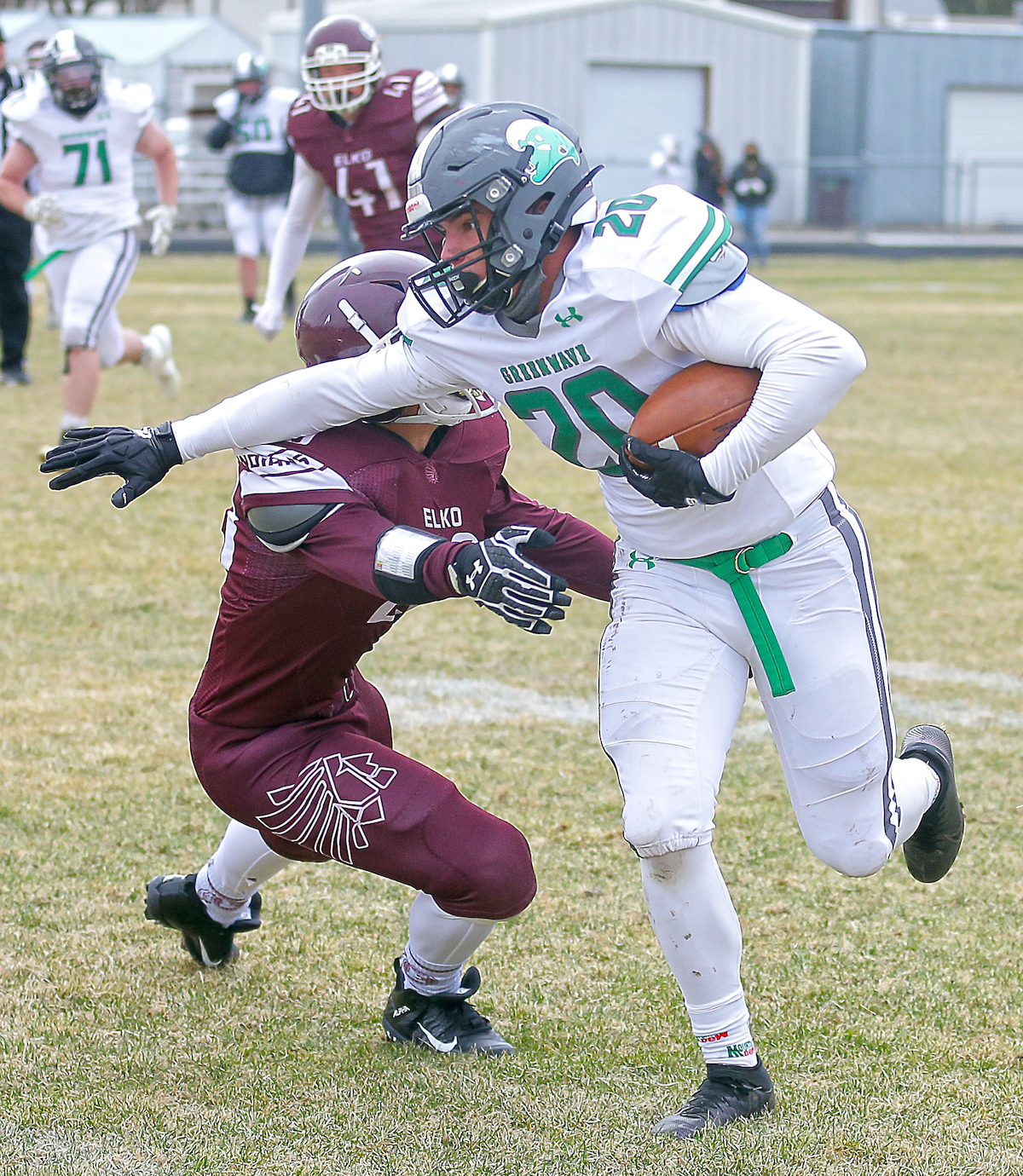 Anthony Mori / Elko Daily Free Press
Cade Barton of Fallon stiff arms an Elko player.
At 9:16 in the second quarter, Andrews bounced off the left side and clawed his way for a 14-yard score. Sam Robertson’s extra point was good.

Fallon’s defense stymied Elko on three four-play series. The Indians received a gift, though, when the Indians punted, and a Fallon lineman tipped the kick that resulted in an Elko fumble recovery.

Fallon possessed the ball for the remainder of the quarter.

Despite the miscue, Hill said the defense played a good game. He said the defense made adjustments and kept Elko out of the end zone, and Jace Nelson had a good defensive game as did the linebacking corps of Julian Evans and Xavier Capton.

Strasdin linked up with Kenji Armbruster for a 22-yard pass, and Andrews rushed over the middle for 14 yards. Strasdin, who was 10 of 14 for 149 yards in the game, found Matt Davis for a 14-yard pass-play to give the Wave a 13-0, but the slippery field caused Robertson to miss the extra point. 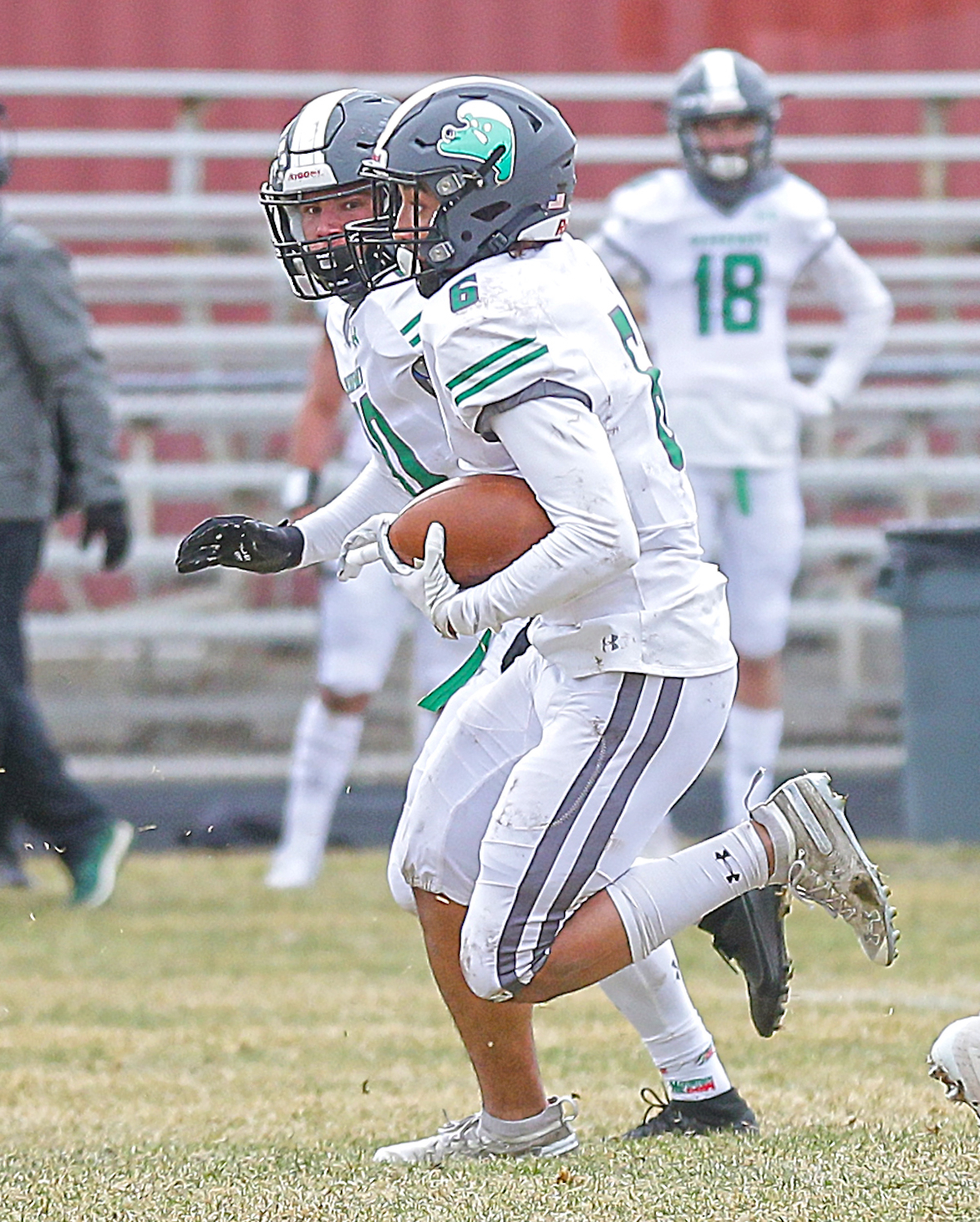 Kickoff returner Tristan Hill relied on his blockers to reach the 39-yard line. Andrews ran back-to back plays, first a 12-yard run and ten a long run up the middle to the Elko 11.

Elko strung together seven plays, but the drive fizzled when Nelson intercepted the pass.
Within minutes, Andrews carried the ball to the Elko 37. A pass interference call and Andrews’ run to the 20 put the Wave in good field position. Andrews then took the handoff to the 9-yard line before Strasdin linked up with Tyler Austin for a touchdown strike.

With the kick, the Wave increased their lead to 27-0.

Fallon scored once in the fourth quarter, a 6-yard run up the middle.

Greenwave play-by-play announcer credited the Fallon line for opening a hole for Andrews’ third TD of the day.

“That hole was as big as the Panama Canal,” Larry Barker quipped for his radio audience.

A 2-point conversion came up short.

Fernley next up
The date has been circled on the calendar for weeks but remembered since November when Fernley upset Fallon 24-20 for the state 3A football championship.

Fernley, 2-1 after thumping Lowry 50-21 on Saturday,  hosts Fallon Saturday at 3 p.m., but the game will be played on the Greenwave field because the Vaqueros’ surface and track was damaged in the late fall 2020 by a flash flood. The Churchill County School Board approved two visiting fans per Fernley senior for the cross-valley rivalry football game.

Fallon, which allows two fans per Greenwave senior for its home football games, increased its gathering limitation from 100 to 250 to align with the state’s updated directive regarding large gatherings. Large gatherings are limited to 50% capacity or 250 without a submitted plan.