More than 58,000 men and women died during one of the country’s longest wars 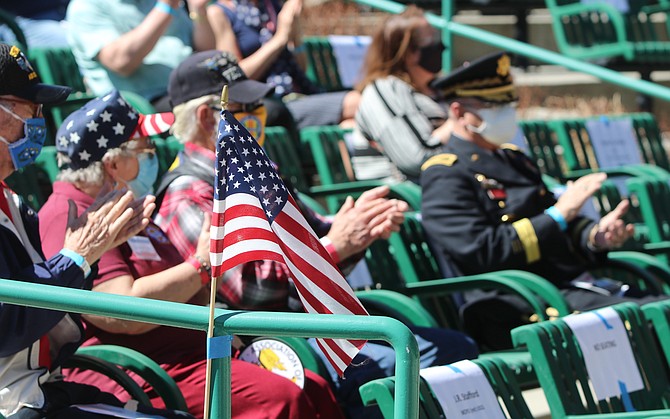 Veterans who attended the National Vietnam War Veterans Day clap after one of the speaker’s made a point about sacrifice.
Steve Ranson / LVN

RENO — The day was not only for Vietnam War veterans to come together as they faithfully do but for younger generations to understand the sacrifices men and women faced in a foreign land a half century ago.

Maj. Gen. Ondra Berry, Nevada’s adjutant general, was commissioned in 1990 as a second lieutenant in the U.S. Air Force, 15 years after the last troops left Saigon aboard helicopters. Berry said he could not be standing before other veterans who sacrificed so much, especially those who gone on births, anniversaries and other celebrations. He also acknowledged military personnel currently serving overseas who are missing those special days. 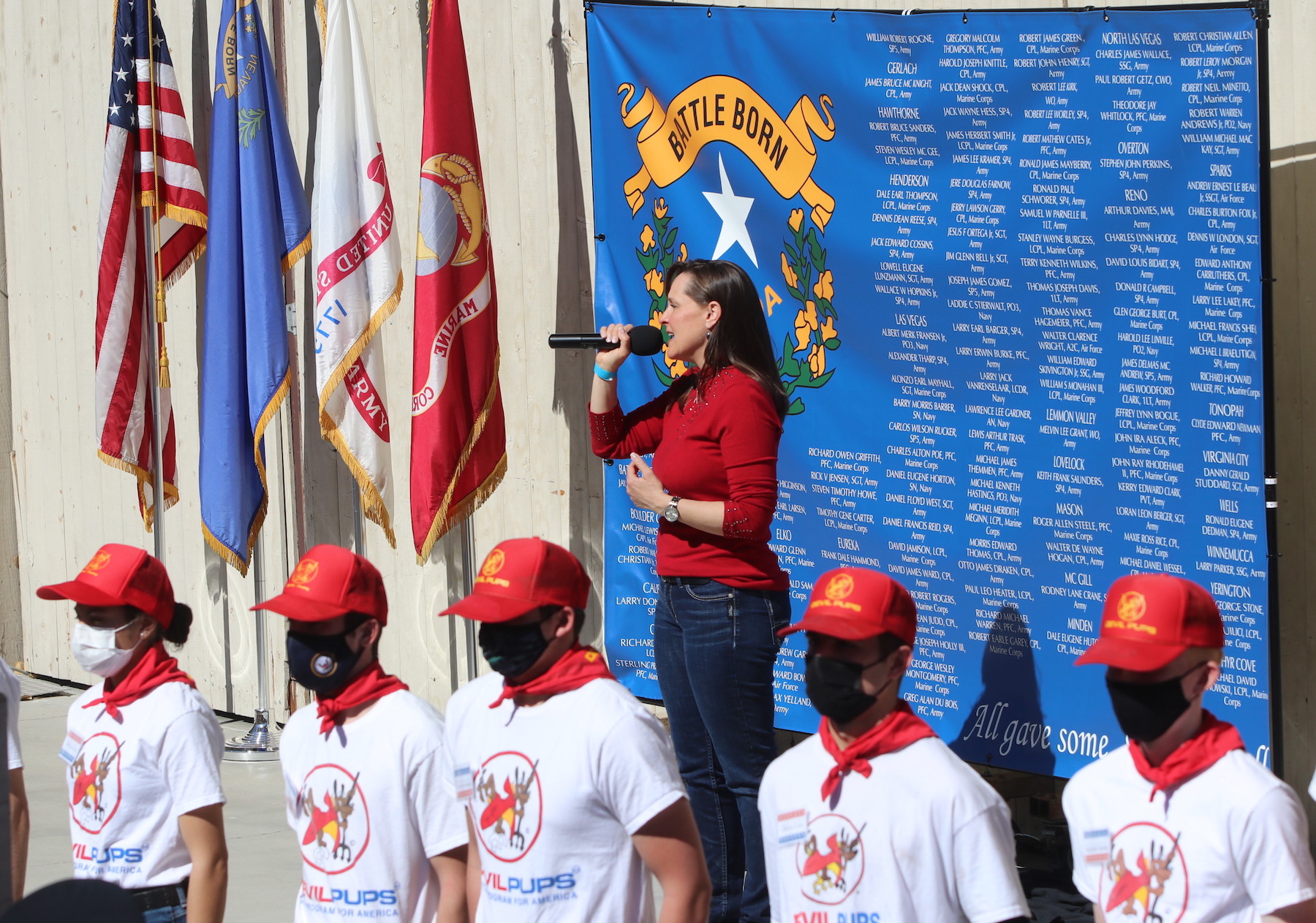 Steve Ranson/LVN
Standing in front of a Nevada flag with the names of those from the Silver State who were killed in Vietnam, singer Kimberly Dixon leads the audience in “God Bless America” at the conclusion of the National Vietnam War Veterans Day. Members of the Devils Pups line up in front.
“We live in a country where we care so much about each other, but we cannot forget where we came from,” he said.

Berry said March 29 holds a special place for both the veterans, the nation and its allies who fought in a foreign land 9,000 miles from the West Coast. Berry said the Military Assistance Command in Vietnam was disbanded and the last U.S. combat troops departed the Republic of Vietnam on that late date in March 1973. The U.S. spent 20 years in Vietnam.

Berry, though, said 1975 was the actual concluding year, but the mission is not complete until every Vietnam War veteran and their families have been thanked and honored for their service, valor and sacrifice. He said this also includes families who lost loved ones. According to Berry and the Nevada Department of Veterans Services, more than 8 million men and women who served during the Vietnam era and in Nevada, and 149 servicemen and women died. Berry read the names of 32 communities in Nevada that were affected by at least one death.

Nationwide, Berry said more than 1,000 veterans are still missing in action or unaccounted.

“We cannot overlook their service and sacrifice,” he said. “Every military leader I know backs the notion to do everything possible to support our nation’s commitment to achieve the fullest possible accounting for those who have not returned.”

The adjutant general encouraged those to say a prayer for the men and women who have not returned.

Steve Ranson/LVN
Maj. Gen. Ondra Berry, Nevada’s a general, spoke at this year’s National Vietnam War Veterans Day, which was held Sunday in Reno. Patriot Guard Riders carried in a wreath and placed it at the podium.
Berry then turned to the home front, saying the county is “in a little bit of disarray.”

“Our county can learn from the military the importance of teamwork, the importance of diversity, fighting a common cause,” he said, adding those in uniform are willing to protect their brothers and sisters at all costs.

Berry continued his thoughts on sacrifice and referred to the Vietnam Veterans Memorial Wall in Washington, D.C. He said the names show the sacrifice of the men and women who fought for their country.

During the ceremony, an unveiling of a Nevada flag with all 149 names occurred. Nationwide, it was also noted out of the 2.7 million men and women who served during the Vietnam War, only 31% are still alive.

Retired Marine Lt. Col. George Malone, a Navy Cross and Purple Heart recipient and past president of the Legion of Valor, spoke of his tour in Vietnam. He remembered the advice given to him after he arrived in country and before he went on patrol: Don’t take the same route back to camp; carry dry socks and plenty of ammunition; tie down anything that rattles; and have a full canteen. 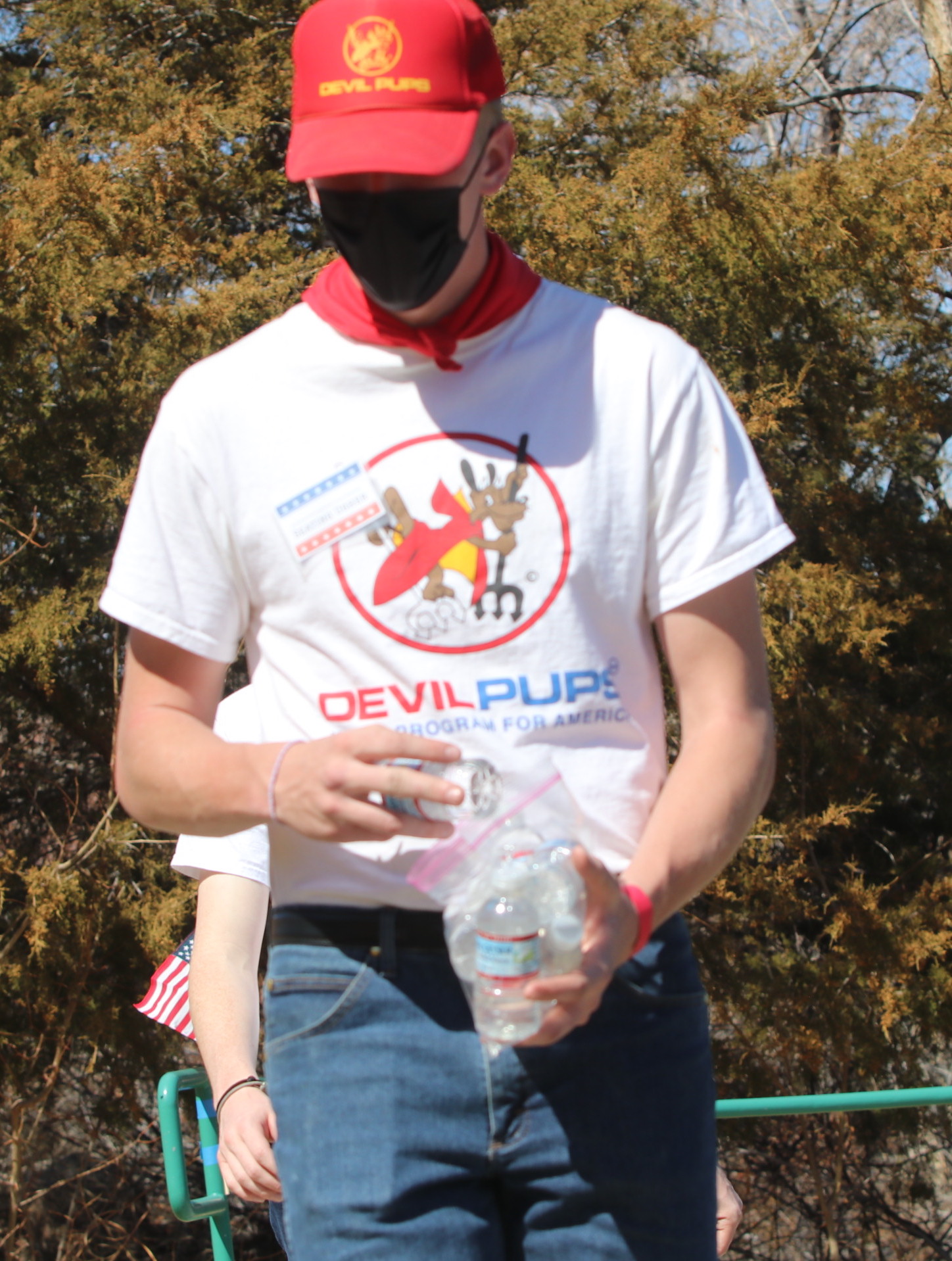 A member of the Devils Pups hands out water during the ceremony.
Steve Ranson / LVN
Malone’s world changed on Feb. 22, 1969, when he was wounded by mortar fire. Before he left the combat area aboard a MEDEVAC (medical evacuation) helicopter, he stayed with his men. The citation for Malone’s Navy Cross stated, in part, “he ignored his own painful injuries as he directed the fire of his machine gunners and grenadiers against the North Vietnamese emplacements. Second Lieutenant Malone boldly fired his light antitank assault weapon against an enemy bunker and hurled hand grenades as he fearlessly led four Marines on a daring charge against the hostile emplacement.”
Malone said his experience showed him how the Marine Corps is family because of its teamwork, tradition and the brothers and sisters who serve together. He said each Marine, solder, airman or sailor has a story.

“When you meet your maker, you better be prepared to tell your story,” he said. 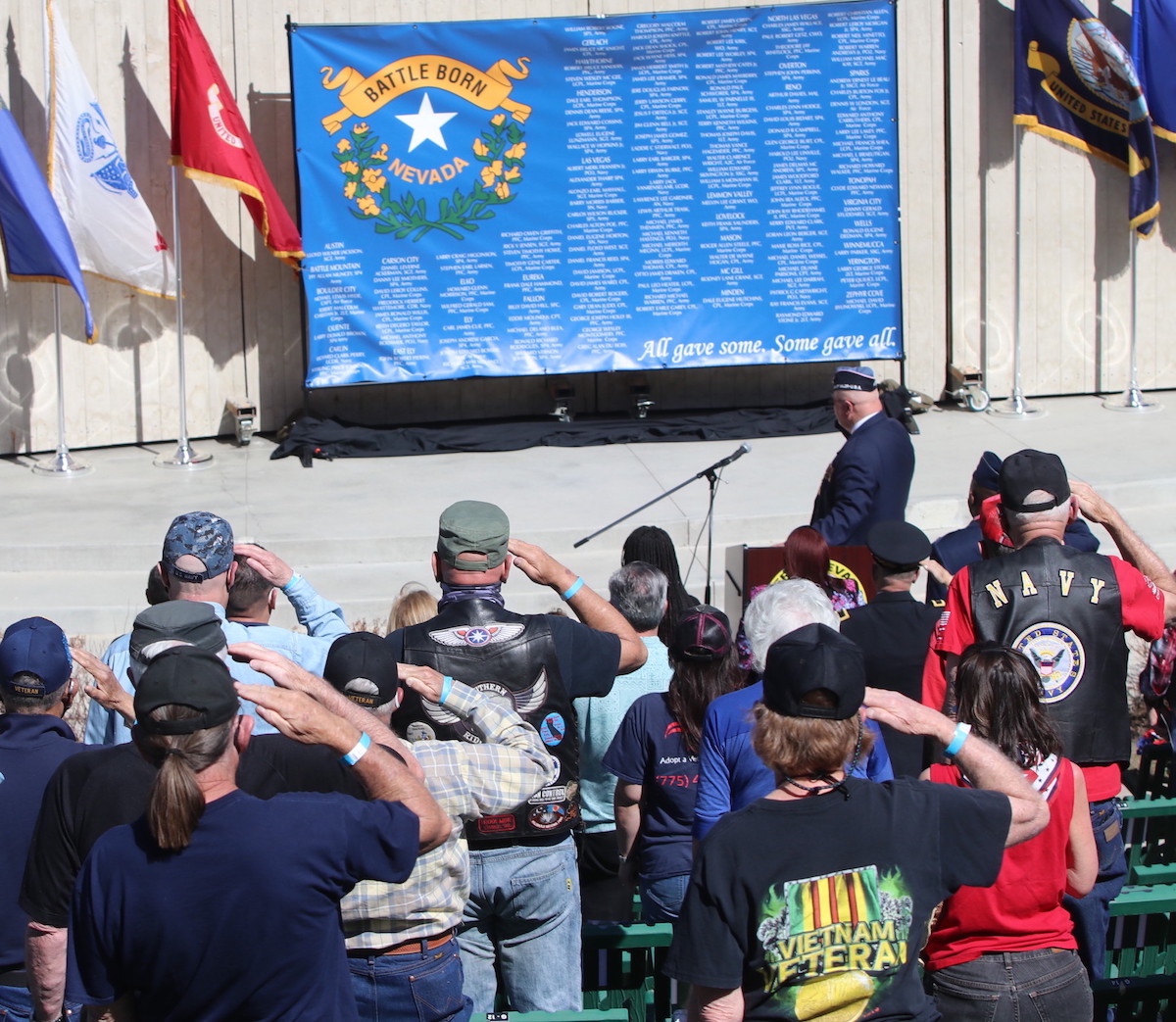 Retired Marine George Malone and other Vietnam War veterans salute a Nevada flag with names of their comrades from the Silver State who died.
Steve Ranson / LVN
After the ceremony, Malone said although the United States has its problems, the country is still worth saving. He calls those in uniform the good guys. Politically, he said the nation needs politicians supporting the military men and women and to be judicious in how they spread the veterans’ precious blood.

Andy LePeilbet was an Army first lieutenant in Vietnam, and spoke last. He was awarded the Silver Star, the Distinguished Service Cross, the Bronze Star, the Purple Heart, the Air Medal and the Department of the Army Commendation medal.

LePeilbet said older veterans should move forward to help the younger veterans who have served multiple tours overseas, some as many as five deployments.

The former infantry officer said the older vets should check on their buddies, call them or stop by and
see them. He said the coronavirus pandemic and its restrictions have prevented veterans from the checking up on each other during such a crucial time. 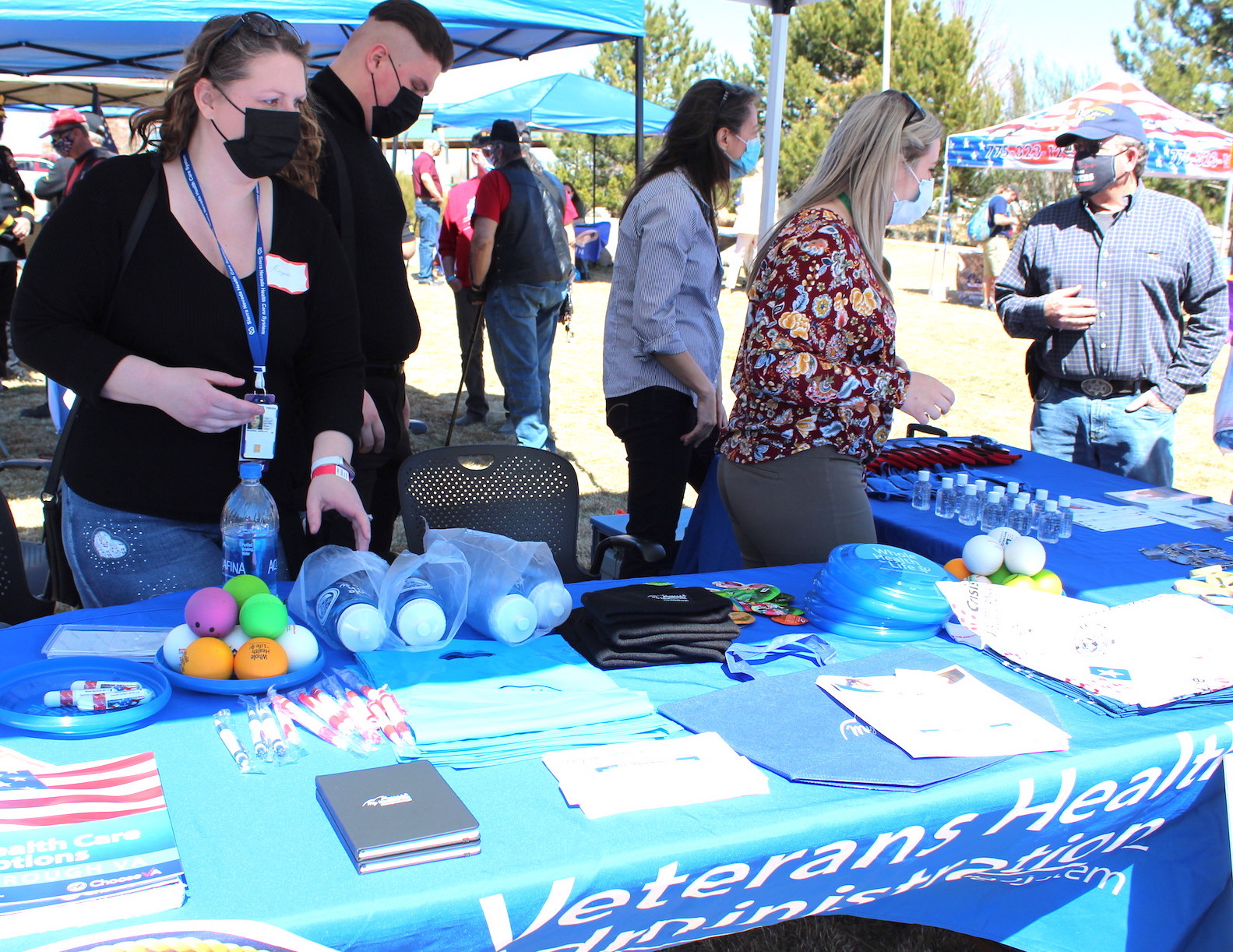 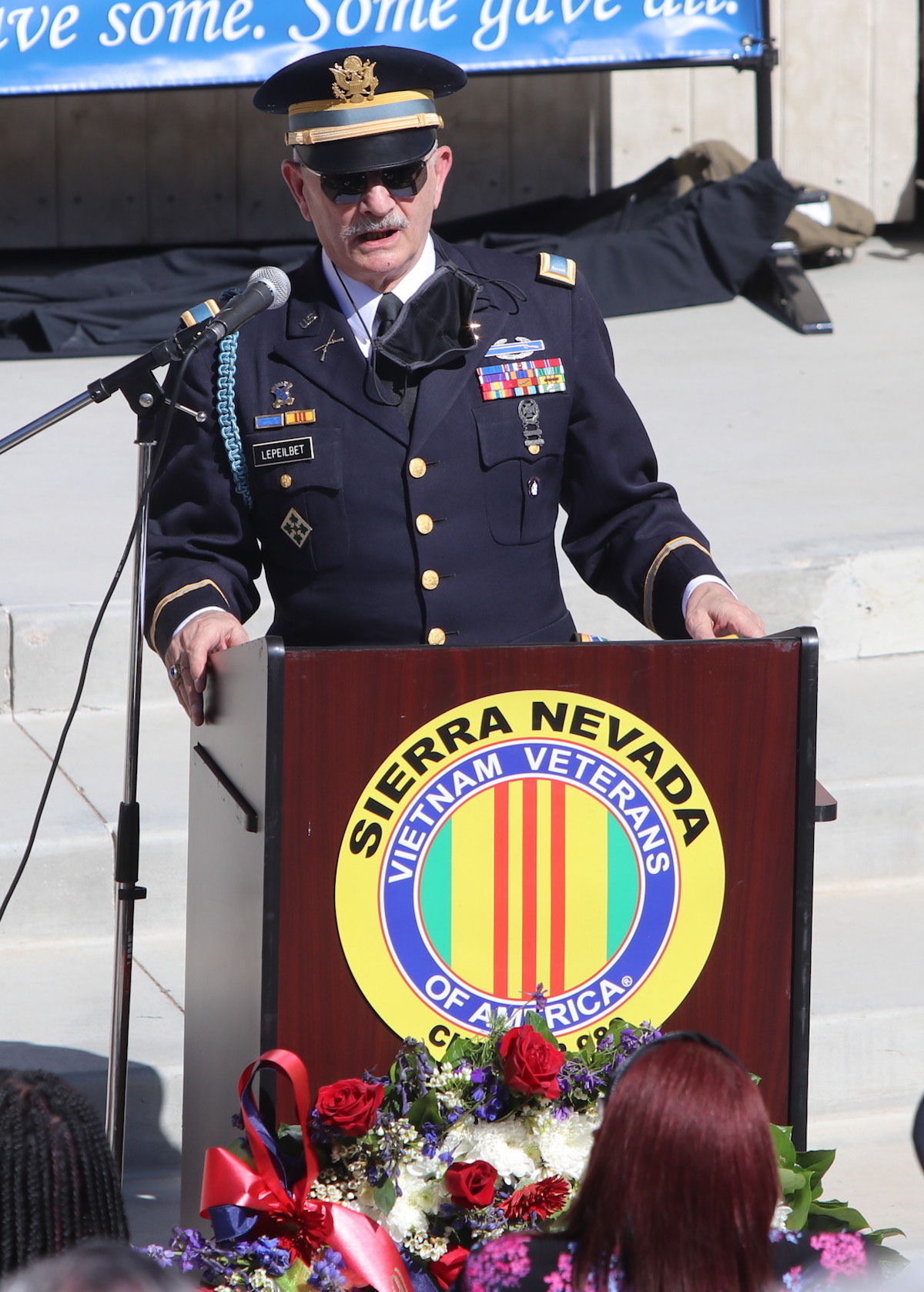 Andy LePeilbet, a first lieutenant during the Vietnam War, was one of the speakers.
Steve Ranson / LVN 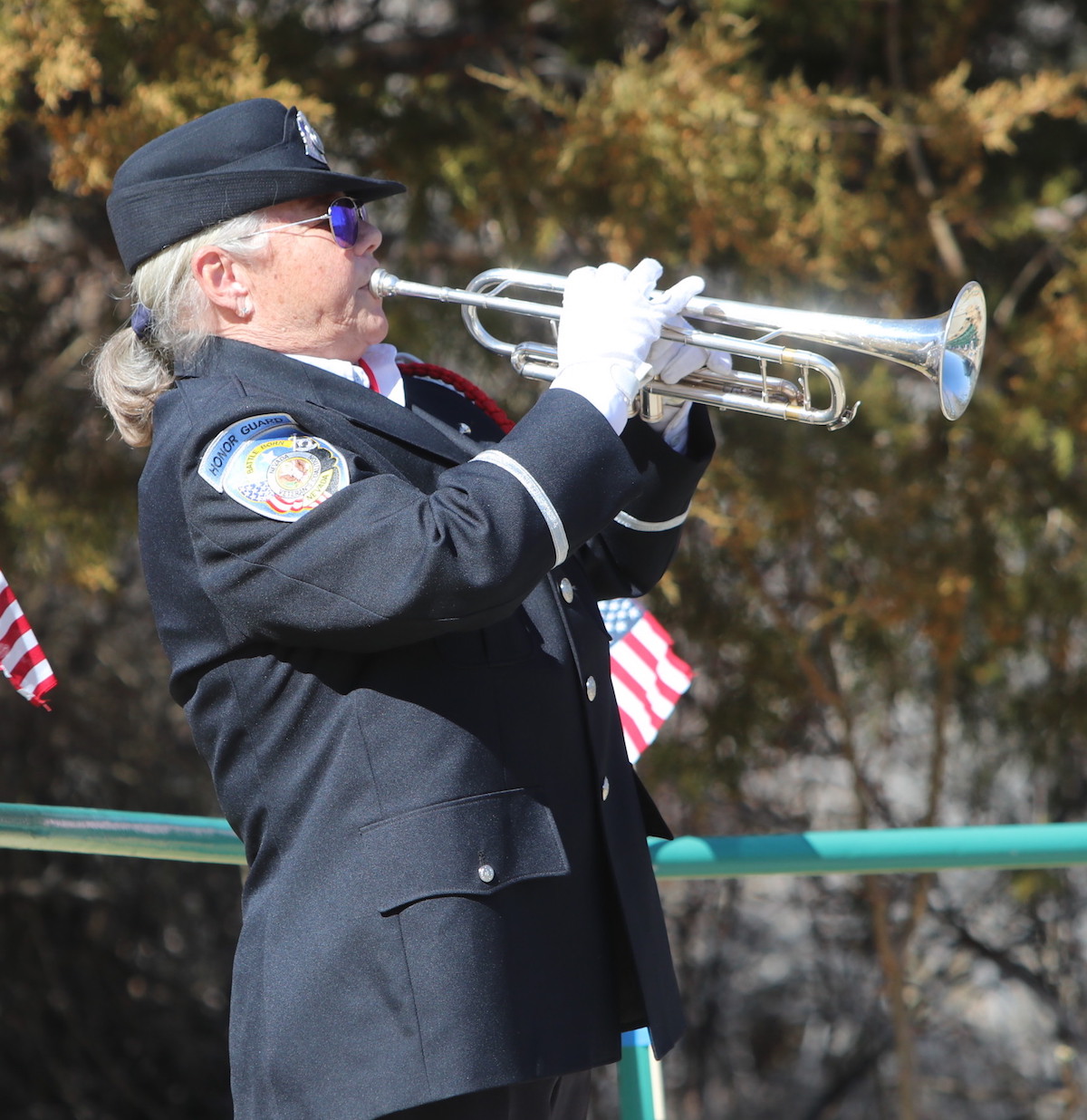