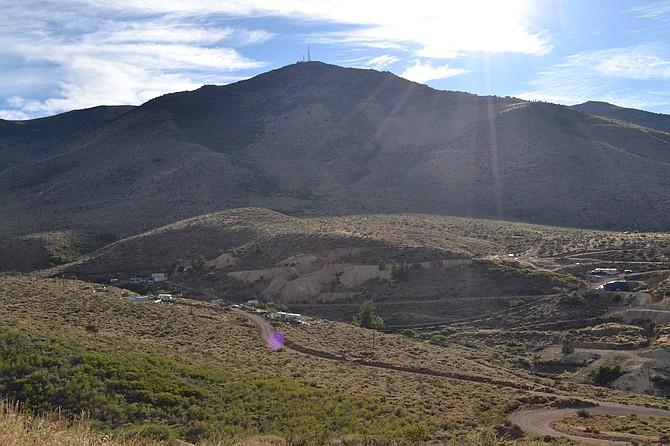 A view of the site of the former mining camp of Poeville.
Courtesy of Mining University

It’s been said that Poeville, one of the few mining camps to ever crop up in Washoe County, was named after a man who was a cousin of writer Edgar Allan Poe.

While that’s probably appropriate for a place that is now a complete ghost, Poeville’s story isn’t particularly macabre and is far more typical of Nevada’s often short-lived mining camps.

Records indicate that in the 1860s and ’70s, prospectors poked around Peavine Mountain, the big mound that stands northwest of the Truckee Meadows. Several small mining camps popped up on the mountain’s flanks, including one called Wingfield (which was located near where the Desert Research Institute and Truckee Meadows Community College are now located), and Poeville, which originally was known as Peavine and later as Podunk (or Poedunk), and Poe City.

Poeville, named for its founder, John Poe, was located on the backside of Peavine Mountain, just above Stead. Poe discovered gold and copper veins in the area in 1862, and within two years a small settlement of about 200 people had blossomed.

By 1874, the community had sufficient activity to be provided with a post office, which operated there for about four years. Local historian John Evanoff also has written that Poeville had a few saloons, a small hotel, livery stables, a large dry goods store, a Chinese laundry, a stamp mill and a wagon repair shop.

Initially, the ore extracted near Poeville proved difficult to process because of scarce water supplies but the town got a boost in 1866, when a freight system started to transport the ore to Cisco, Calif. for processing (later made even easier with the completion of the transcontinental railroad through Reno).

While Poe originally had thought the site was rich with gold, once mining was underway it became clear the veins contained more copper than the other precious metal. The lower price for copper, coupled with more lucrative opportunities in other mining camps, caused residents to begin to drift away.

Nevada historian Stanley Paher notes that Poeville’s copper was of sufficient quality that specimens were exhibited in 1864 at the Nevada State Fair, held in Carson City that year.

Today, nothing remains of the mining camp. The drive or hike to the site, however, is popular with four-wheelers, mountain-bikers and hikers.

A 6-mile roundtrip trail known, appropriately, as Poeville Trail, can best be accessed from Peavine Road, a dirt route that goes to the top of Peavine Mountain. You can find Peavine Road off North Virginia Street, about a quarter-mile west of Stead Boulevard. A good source of information is the All Trails website (www.alltrails.com/trail/us/nevada/poeville-trail).