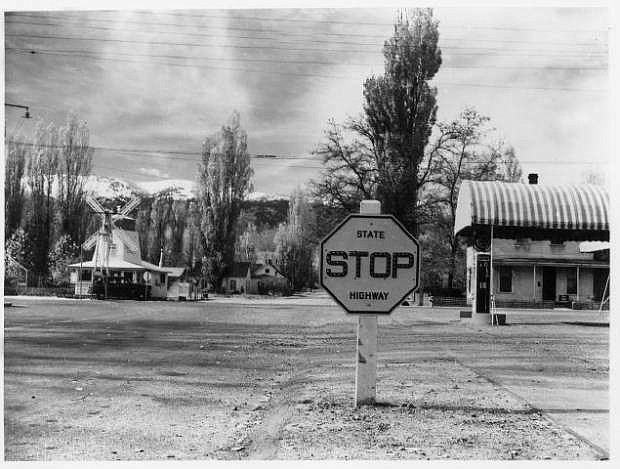 Rain is greatly needed. The hot season, everywhere, leaves prostrated, the early autumn months bring a harvest to the Doctors. These dry burning days and cool chilling nights repeat themselves in the reaver and ague and intermittent febrile attacks which so are so frequently observed on all hands. They who get sick find it difficult to rally. We have our sickly season, and it is upon us now.

Dying Statement. On Sunday evening, when it was found that the end was approaching. Major S.C. Scoville made his dying statement, and reiterated the accusation that T.S. Coffin was the person who shot him. — Reno Journal.

Several Carsonites have the prospecting fever. One of them showed a fine specimen of gold yesterday. We hope that the piece is from a ledge as wide as a house.

Senator Howard Cannon has co-sponsored legislation calling for a nationwide driver and pedestrian education program “to end the mass slaughter on American highways which claim 50,000 American lives each year.

Two of the victims in a Sept. 18 blast at a Minden aerosol recycler Depressurized Technologies International are expected to be released this week.

The Mint gun “went off” last evening, behind a pair of stout greys from Evan David’s stable. It had a sturdy look and a look as if it had some good news to tell the people of Empire — some news about the Colorado election, for instance. Our friends may rest assured that the grim old piece gave a good account of itself there among the Empireans, as it always does whenever it talks.

Dead and Dying. Pat Birmingham, one of the men shot on Friday last at Pizen Switch, Mason Valley, died a few hours after the shooting occurred. Horton, the other wounded man, is still alive, but no hopes are entertained of his recovery.

Dutchy Coombs, formerly of this city, has been chosen trainer for the Burns and Waterhouse stables.

President Roy Kelly of the Lions today appointed a committee to meet with committees of the other service club for the purpose of organized effort to keep the unemployment compensation headquarters in Carson City.

More than 600 school districts in America are investigating the extended school year programs, search for ways to educate more children than ever before without the expense of building new facilities.

The Great Pumpkin visited Seelinger Elementary School on Friday, leaving behind about 1,000 future Jack-o-lanterns for the month annual pumpkin patch.

Nothing is more curious or interesting at this stage of the world’s history than the continued existence and use of the “Divining Rod.” But that it does continue to be employed, that it is believed in, that it is an important factor in prospecting, and that it has a very much in earnest champion and exemplifier in the person of Mr. A. Peck, is fully understood.

In Brief. A bicycle rider attracted some attention yesterday on Carson street.

Plenty of Suggestions. Ever since the Appeal started to move into new quarters suggestions have been offered by everyone that happened in. One or two of the visitors believed it would be a good plan to put the machinery down the cellar as it would fill in a short time with the sweepings. This plan was overruled as the Appeal has not been the habit of sweeping. Another one was: “If the Appeal had only saved all the hot air that has been cut loose from this office in the past forty years, you would never have to put a stove in the place.”

Senator James Mead of New York read to the senate “concrete, documentary evidence that Hitler and the Nazi police are destroying the Catholic Church in Germany.”

A state of emergency has been declared in Genoa, with that historic portion of Western Nevada named a disaster area by reason of an August flash flood which wiped out the towns water system for fighting fires.

The first week of Nevada’s medical marijuana law brought four formal applications for cards allowing possession and use of pot.