The Nevada Traveler: It’s a name that just jumps out at you: The mining camp of Bullfrog 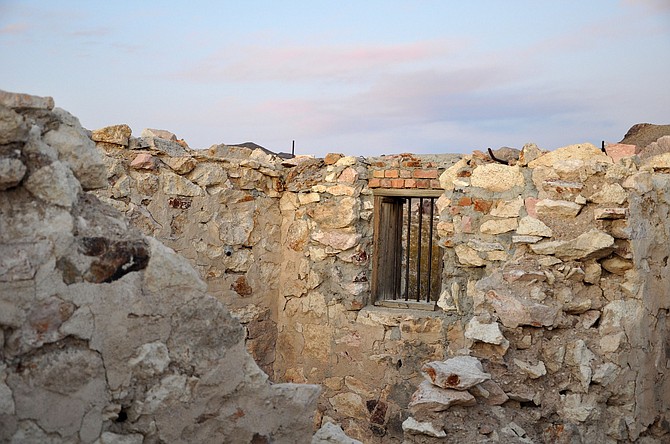 Ruins of the former Bullfrog Jail, one of the few remnants still standing in the old mining camp of Bullfrog.

Bullfrog boasted just about the best name ever for a Nevada mining camp.
How it came to have that name, however, isn’t as clear. Historians say there are a couple of different versions of how it gained such a colorful name.
According to one story, after gold was discovered in the region in August 1904 by two miners, Ernest L. Cross and Frank “Shorty” Harris, Harris thought that the ore, which was speckled green, resembled a bullfrog — hence, the name.
Another version, apparently advanced by Cross, was that the name was derived from an old song that Cross always sang, which included the line: “The bullfrog on the bank and the bullfrog in the pool.”
Whatever the origins, within a short time after Cross and Harris made their discovery, a significant mining boom kicked off in the area. The two had taken their ore samples to the mining town of Goldfield, 75 miles north, to have them tested and word soon spread about their fabulous discovery.
Within months, tents and wooden shanties were erected throughout the area. An early photograph shows dozens of white tents spread all over the valley, with little apparent planning or design.
Eventually, a few town sites were established in the vicinity, including one camp called Amargosa City. In early 1905, the entire town of Amargosa City was moved to a flat area below the adjacent mining town of Rhyolite and renamed Bullfrog.
For a short time, Rhyolite and Bullfrog were pretty fierce competitors. By early 1906, Bullfrog had more than 1,000 people, a couple of hotels, a water system, a bank, a post office, a growing residential district and a small business district, and appeared to have the edge.
But Rhyolite eventually would surpass Bullfrog. According to historian and photographer Nell Murbarger, a man named Pete Busch was the first to envision Rhyolite as a new metropolis in the desert and aggressively promoted his idea to outside investors.
His efforts bore fruit as many eastern investors, who had missed the Tonopah and Goldfield mining booms, poured money into Rhyolite. At its peak in 1906-07, Rhyolite had more than 6,000 residents, an elaborate Mission-style train depot and dozens of businesses.
While its sister city thrived, Bullfrog began to fade. Many businesses, sensing greater opportunity just up the wash, relocated to Rhyolite.
In 1907, when a national financial panic suddenly stopped the flow of investment into Rhyolite, Bullfrog also was impacted. By 1909, its mines closed and the former boomtown was in a freefall. The Bullfrog post office shut down in May 1909 and most of the rest of its businesses closed or moved away.
A visit to the site of Bullfrog reveals only a couple of foundations, including of the former jail, a few stonewalls and the remains of a vintage automobile. Years ago, someone placed hand-painted signs on a few of the former locations of the buildings, although it’s amusing to look at an empty patch of sagebrush and weeds marked “Bullfrog Bank.”
Other signs indicate the former site of the general store and other establishments.
An interesting side note is that the name, Bullfrog, resurfaced about 70 years after the town’s demise. In the 1980s, the Nevada Legislature created a new county, which it named “Bullfrog County.”
The purpose of Bullfrog County, located in the vicinity of the Yucca Mountain range (not too far from the historical Bullfrog mining district), was to allow the state to tax — at a high rate — the federal government should it succeed in placing a high-level nuclear dump site at Yucca Mountain.
Alas, this Bullfrog’s existence was even more fleeting than the original, as the courts quickly tossed out the law creating the county.
Bullfrog is located about a mile west of the ghost town of Rhyolite. To reach the site, travel south on Highway 95 to Beatty, then head four miles west on State Route 374 to Rhyolite. The remains of Bullfrog are located adjacent to a large red barn-shaped building, directly west of the entrance to Rhyolite.