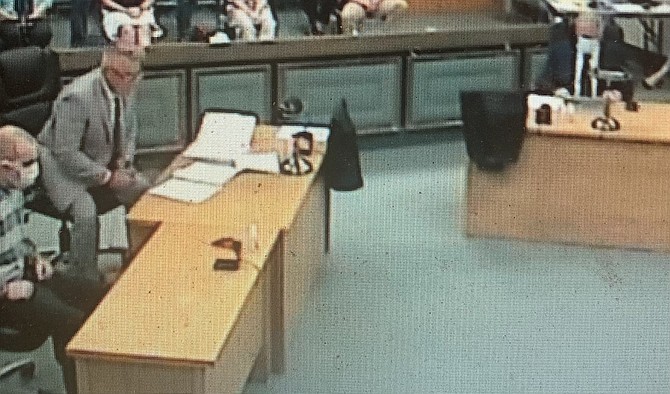 A risk assessment hearing was conducted in Fallon on Sept. 7, 2021 for John O’Connor, who was charged with a 2018 murder. From left are O’Connor, defense attorney Richard Davies and Churchill County Chief Deputy District Attorney Lane Mills. Not pictured is Chelsea Sanford, deputy district attorney. (Photo: LVN via Zoom)

A Fallon man charged with a 2018 murder at a neighborhood church will remain in a supervised mental health facility because of his incompetency to stand trial.
John O’Connor, 51, who was deemed incompetent in July, attended a risk assessment hearing Tuesday in the Tenth Judicial District Court before Senior District Judge William A. Maddox. Maddox is a senior judge who sat in for Judge Thomas Stockard because of a possible conflict of interest. Family members and friends attended the hearing, which took under one hour to complete. It was also live-streamed.
O’Connor originally pleaded not guilty to four charges in 2019 to the murder of Charles E. “Bert” Miller at the Church of Latter-day Saints on West Richards Street on July 22, 2018. Both men attended the same church. In addition to being charged with first-degree murder, O’Connor was charged with battery with a deadly weapon when he allegedly shot Duane Miller (Bert Miller's brother) with a handgun, causing prolonged physical pain, assault with a deadly weapon when he allegedly aimed the handgun at another member of the church and having a concealed weapon without a permit.
Based on evaluations from a psychiatrist and two psychologists, Maddox said at the July hearing O’Connor was incompetent to stand trial. At Tuesday’s hearing, the visiting judge committed the defendant to Lake’s Crossing, which is described as a “maximum security psychiatric facility providing comprehensive forensic mental health services.”
Lane Mills, chief deputy district attorney for Churchill County, said the DA’s office had filed a motion and received recommendations for a secured facility and no additional evidence would be presented to the court. Reno attorney Richard P. Davies has represented O’Connor during the hearings, but said he’s felt conflicted with the case.
“I feel like, I feel like the community deserves Mr. O’Connor to be committed for 10 years. That’s my feelings,” he said, referring to the baseline.
Davies said his client may have wanted him (Davies) to put on a spirited defense against the placement in Lake’s Crossing.
“So I’m trying to walk a line here between representing Mr. O’Connor zealously, (and) at the same time walk beholding to my own conscience …,” Davies said. “So I did not file an opposition to this. I don’t feel there should be an opposition to this. I feel like the state has the evidence to support the civil commitment.”
Davies said he was looking to Maddox for guidance. Maddox, though, said O’Connor couldn’t be canvassed because he was found incompetent less than two months ago based on previous evaluation reports.
After a short dialogue on the report, Maddox told Davies he didn’t know what more the defense attorney could’ve done for his client. Maddox then asked if O’Connor had anything to tell the court.
“I mean, you understand the proceedings,” Maddox said. “I know from reading your response to the medical professionals you talked with, I’d certainly be willing to listen to anything you have to say. Anything?”
O’Connor remained silent.
“Let the record reflect he didn’t say anything,” Maddox said.
Mills said based on the risk assessment, O’Connor’s insight to his illness is poor. Then, Mills read a portion the report.
“The defendant’s history demonstrates that these symptoms would also significantly increase his risk for violence, including lethal violence toward others … Those factors are an act of significant violence, a history of relationship problems, a major mental disorder, attitudes condoning violence and a history of poor compliance with recommended treatment.”
Mills said this was a very dangerous case with the potential to harm many people.
“And so, unfortunately, you know the victim’s family didn’t get to see a trial in this matter and have closure with this. Maybe someday they will, maybe not,” Mills said. “But the law is such that we ask this court to commit this defendant to a secure psychiatric facility pursuant to subsection 178.491 for as long as possible.”
According to Nevada law, O’Connor will remain in custody at Lake’s Crossing upward to 10 years but return to court annually for a status hearing on his competency. Maddox said O’Connor did not meet the criteria for competency and repeated it again at Tuesday’s hearing. As previously reported, at issue are several U.S. Supreme Court rulings as well as Nevada Revised Statues that focus on both a defendant’s competency and sentencing guidelines.
Maddox said society has developed a body of laws — probably starting with the Magna Carta — where statutes were added. He then referenced the state’s current statutes.
“In this case, because Mr. O’Connor is not competent, he doesn’t have the requisite specific intent to commit the crime that he’s charged with,” Maddox said. “And because of that, we have a bunch of statutes, which, if the Legislature could even change it and try to make it more clear, but I have to make a finding by clear and convincing evidence.”
Maddox said he can make a decision beyond a reasonable doubt that O’Connor is incompetent and has no probability of attaining competence in the foreseeable future.
“And so I find he has a mental disorder as provided for by NRS 178.3985,” Maddox said.
Consequently, Maddox said O’Connor remains a danger to himself and others and requires a level of supervision provided by a forensic facility.
The next hearing date has been set for Aug. 30, 2022. If O’Connor is judged to be a threat or a threat to himself, he will remain at the facility up to a decade. Mills said an administrator will eventually make a determination if O’Connor stays for five additional years for a total of 15. At that time, the court will then determine the next steps.
If a medical team, though, determines O’Connor is competent to assist his defense attorney and stand trial, Mills said the district attorney’s office will refile charges.