Austin, defense come up big in road win over Sparks 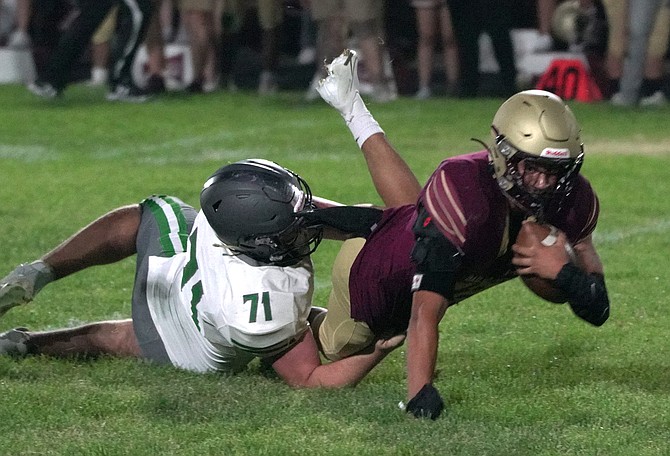 SPARKS – Down to their third-string quarterback who has never taken a snap and facing a much-improved opponent, the Greenwave still found a way to come out on top.
The offense churned out yards when it needed to and the defense stepped up in the second half as Fallon defeated Sparks, 28-18, Friday night at Tip “Whitehead” Field.
Fallon (1-1) hosts Truckee, which lost to Elko on Saturday in its home opener, on Friday at 7 p.m. at the Edward Arciniega Athletic Complex before welcoming South Tahoe the following week to close out the 3A cross-over league schedule. The Greenwave opens 3A East play on Sept. 24 against Dayton.
“We were up against it this week with exclusion and things like that,” Fallon coach Brooke Hill said. “We only practiced one day outside this week. We had to have three days inside. We talked about coming out here and competing and doing enough to win, and the kids did that. Tyler never playing quarterback, because he’s a good athlete, we knew he could do some things and he helped us win the game. He made some good throws and had some good runs.” 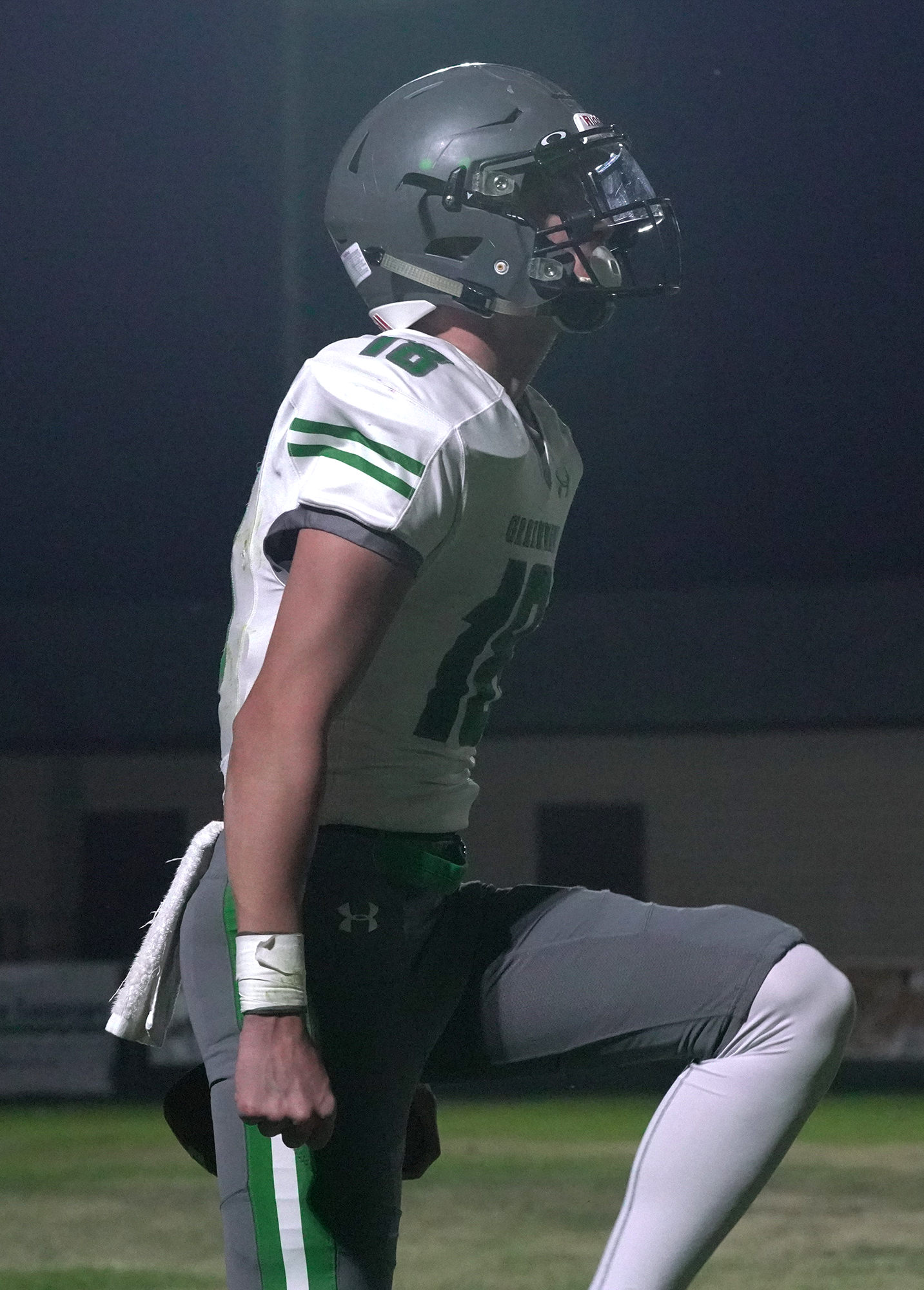 Fallon quarterback Tyler Austin reacts to scoring a touchdown against Sparks on Friday.

Before his team’s first game of the season, one of Hill’s biggest concerns was how the delta Covid variant would factor in with sports. The highly contagious variant coupled with his program testing weekly – as well as the remaining fall sports if they’re traveling out of county for the week – it has made it more difficult this fall to gauge who will suit up.
“When you think about it and you have a spring season like we had, which wasn’t normal, and you get this with what’s going on,” Hill said. “I’m not kidding. From day to day, I didn’t know who we were going to have. We lost kids even today because of exclusions and contact tracing. Hopefully, we’ve got that fixed at the school so not so many kids are excluded.”
For the first time in two weeks, though, Fallon was back on the field after its second game was cancelled because of air quality concerns. Fallon found itself in a dogfight early as both teams traded turnovers in their first possession.
Senior Tyler Austin, a wide receiver, started at quarterback but it was the run game that got the Fallon offense going in the first drive. Tristan Hill and Austin’s carries led Fallon into Sparks territory, setting up first-and-goal on the 2-yardline before Sparks caused Austin to fumble on the 8. Fallon, though, got the ball back when Hill intercepted the Railroaders’ second play.
The next series was a comedy of errors that went against Fallon.
Austin and Hill traded runs to put Fallon back near the goal line for a new set of downs. After Hill’s first down brought the ball to the 2-yard line, the officials did not reset the down and the next two plays proceeded as third and fourth down, giving Sparks the ball back on its own 3. The down marker and scoreboard, however, reflected the correct down.
After the Greenwave defense forced a Sparks punt – its only punt of the game – the offense broke through for the first score of the game. 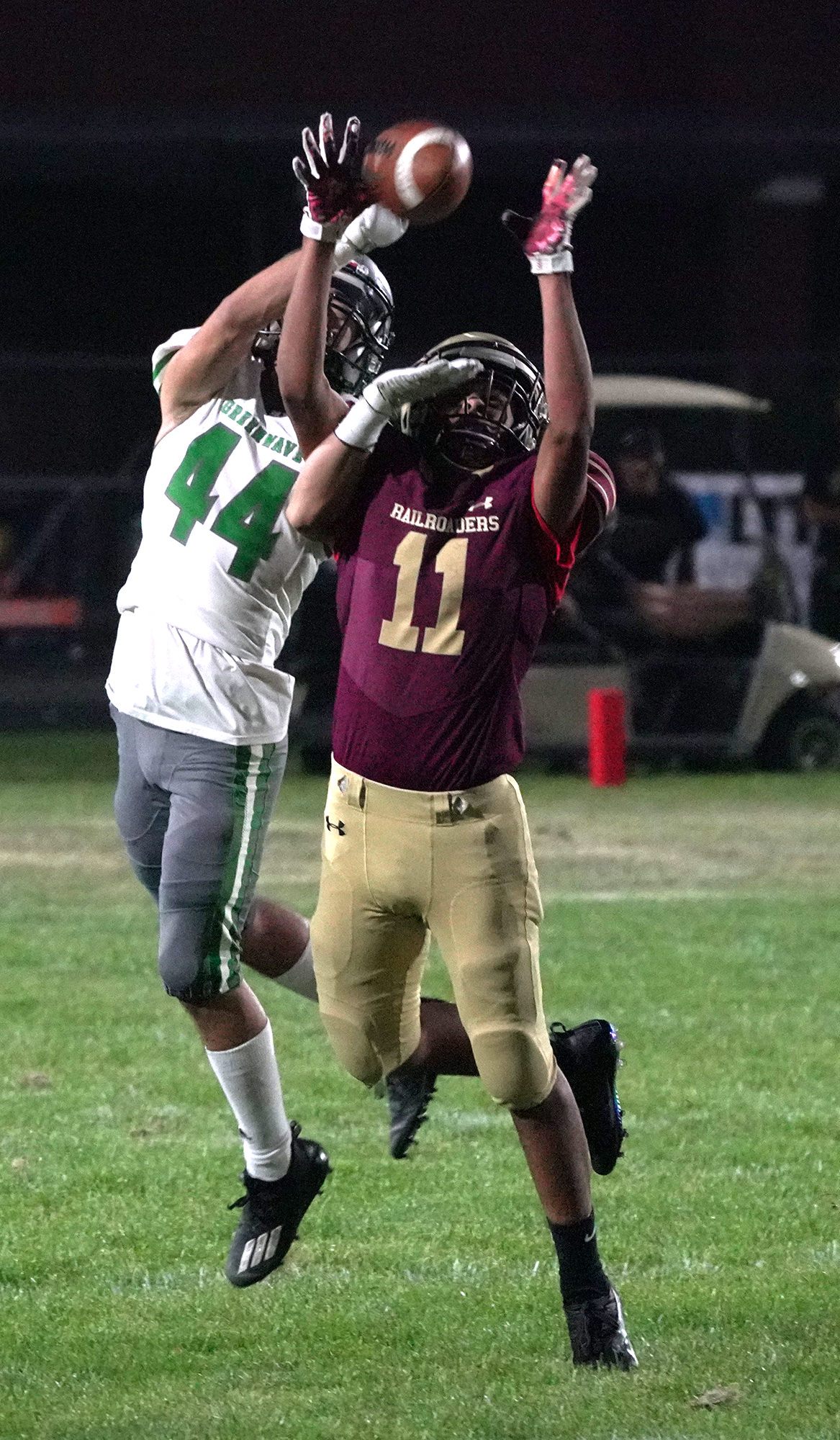 A 41-yard pass from Austin to Reese Kincaid set up Fallon in the red zone and Hill’s 5-yard run prompted another first down on Sparks’ 12-yard line. On fourth-and-nine, Austin found Ethan Tarner across the middle of the end zone for the 11-yard strike with 1 minutes, 8 seconds left in the first quarter. Austin threw an incomplete pass for the two-point conversion.
“I’ve always liked throwing around footballs, but I never thought I’d be a quarterback,” Austin said. “Having Tarner up, he’s big and fast and has good hands.”
A defensive mistake prolonged the following series for Sparks and helped the Railroaders tie the game.
Facing third-and-11 on the Sparks 34, Fallon was flagged for roughing the passer on the first play of the second quarter, giving the Railroaders a first down near midfield.
A pair of 13- and 10-yard runs by Taylor Shepard and Omar Dominguez helped fuel the drive. On fourth-and-nine from the 11, Dominguez’s screen pass to Shepard on the left side seemed to stall near the end zone but a late push led to Shepard getting the first down at the 2-yard line. Shepard ran the next play into the end zone to tie the game at 8:39 in the second quarter. The PAT was blocked.
Fallon’s second turnover ended another potential scoring drive.
With the Nugget casino in his view, Austin heaved a 39-yard completion to Isiah Diaz, who leaped against Dominguez, securing possession. Evermar Garcia’s 29-yard run fell just short of the goal line, giving Fallon first-and-goal from the 2. Holding and unsportsmanlike conduct penalties pushed Fallon back to the 17 when Austin’s pass went off Steven Moon’s hands, falling into Sparks’ possession for the interception with 6:04 left in the half.
Unlike the situation in the first quarter, Sparks opted to go for it on fourth down from its own 4-yard line. The Fallon defense forced an incompletion and two players later, Diaz’s 2-yard run broke the tie. Another unsportsmanlike conduct penalty against the Greenwave followed but Austin was able to lace an 18-yard completion to Tarner for the two-point conversion and 14-6 lead with 2:56 remaining. 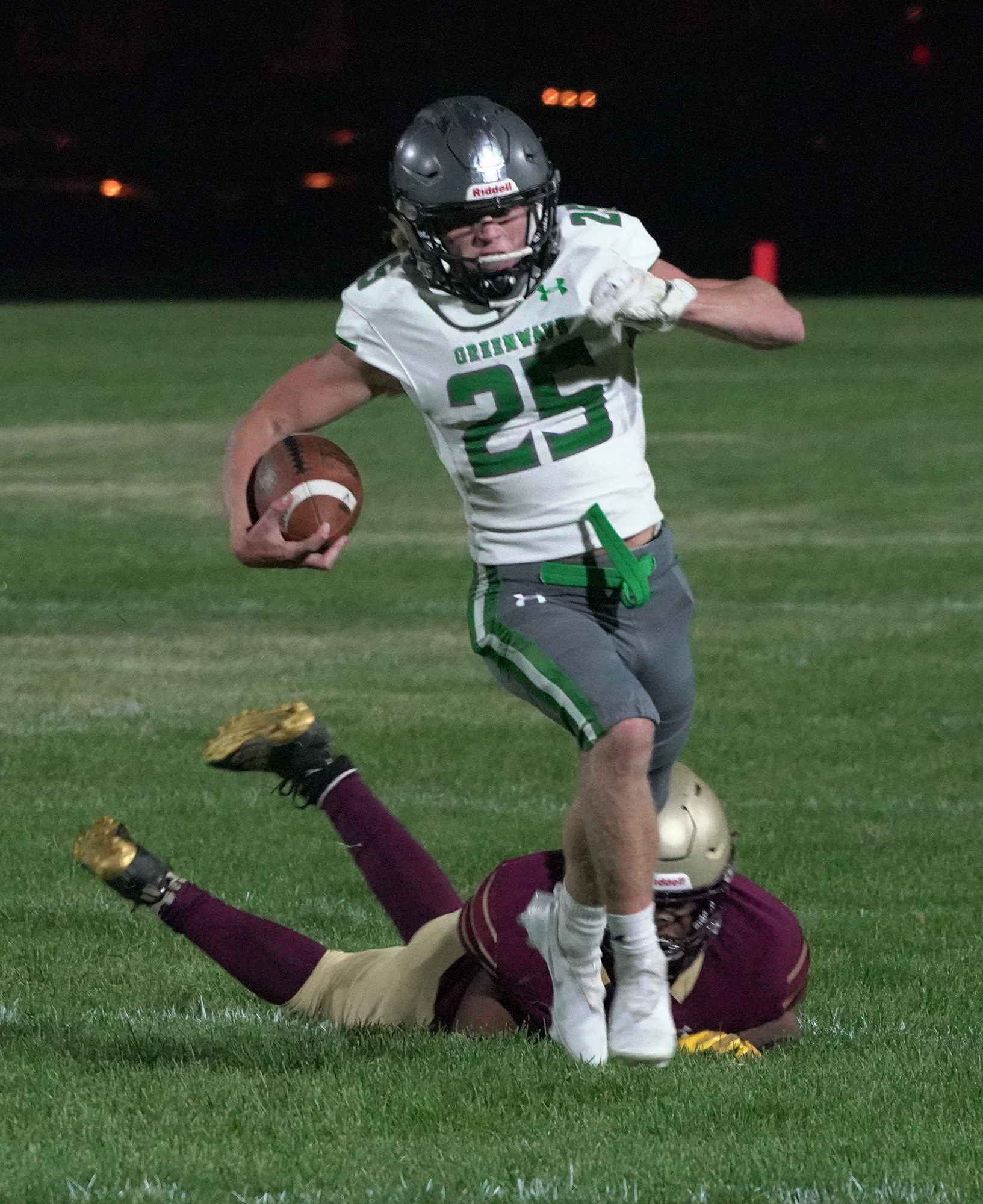 Sparks, though, would get the last score when Shepard busted through the line for a 24-yard touchdown with 56 seconds left. Dominguez was sacked on the two-point conversion attempt, giving Fallon a 14-12 lead going into halftime.
Hill said the team made alignment adjustments at halftime, which were key to Fallon’s success in the second half. For senior defensive back Francisco Tapia, the needed also needed to be more physical.
“During halftime, we were all talking to each other about who wants to be the most physical team out there,” he said. “During the first half, (Sparks) was the more physical team out there. We didn’t like that. We wanted to show them that we’re tougher. I felt like we got everyone on the same page and that we all got ready to hit and whatever it takes to win the game.”
Just like its last fourth-down attempt, Sparks opted not to punt in its own territory and Shepard was stopped for a 2-yard loss to give Fallon the ball on the Railroaders’ 23. In the red zone again, Fallon’s offense stalled but unlike the other failed attempts. Facing fourth-and-goal from the 4, Garcia was stopped at the line of scrimmage to give Sparks the ball back with 7:30 left in the third quarter.
The Fallon defense continued to shut Sparks down as the Railroaders failed to punt on fourth down. On its last down from its own 9-yard line, Dominguez was stopped 2 yards short of a first down to set up Austin’s 12-yard touchdown run on the next play. Brody Jacks’ run on the two-point conversion attempt gave Fallon a 22-12 lead with 6:31 left.
After numerous kickoffs landing out of bounds in the first half, Moon adjusted at halftime, pinning Sparks deep in its own territory. Kincaid intercepted a tipped pass on the ensuing series in Sparks territory, and Fallon’s offense took advantage. Diaz’s 10-yard run gave Fallon a first down to set up Jacks’ 25-yard touchdown run with 2:17 remaining in the quarter. The two-point try failed but Fallon led 28-12.
“We had better field position and we made some adjustments defensively, so we had more stops,” Hill said. “We still gave up some stuff that we should not have given up. We’ve got to get better next week than we are now and hopefully, we can get everyone back and have some continuity. I think this might be the nature of football this year.”
The defense stepped up again with a crucial sack on fourth down.
On its own 35, Julian Pulido tried scrambling out of the collapsing pocket but not before Garrett Jarshcke pulled him down for the 8-yard loss. Fallon, though, couldn’t take advantage and fumbled the ball three plays later, which set up the final score of the game when Pulido’s 13-yard pass to Dominguez cut the deficit to 10 points with Fallon leading 28-18 with 7:05 left in the game.
Fallon punted on its next possession, but the defense held.
Facing fourth-and-12 from the Fallon 45, Pulido found Mekhi Brown across the middle near the first down marker but the Railroaders were marked short. After another Fallon punt, the defense ended the night with another stand when Brady Alves broke up the pass on a fourth-and-goal from the 15-yard line with 18 seconds left in the game.