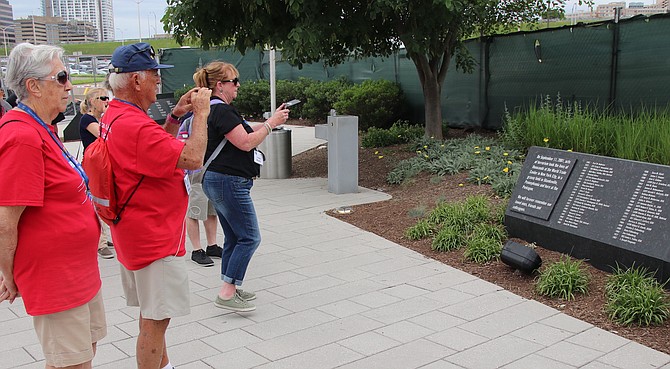 Fallon 911-1 Honor Fight Nevada veterans and guardians visit the 9/11 memorial at The Pentagon in 2019.
Photo by Steve Ranson.

In a few days we’ll be remembering the 20th anniversary of Sept. 11, 2001.
We asked our readers about the day and what happened afterward. Some reflected on the events while others looked at how their lives changed.

Patrick Allen Erickson
I just turned 31 on July first of that year. I was active-duty Navy stationed at Recruit Training Command (RTC) Great Lakes as a small arms marksmanship instructor (SAMI) at the new live fire gun range.
We had just started our day with a class. Once we got word of the attacks we shut down operations and spent the rest of the day watching the news. Those of us who had wives and children were allowed to bring them on base to be with us at work while we watched. We were put on alert that we may be used by the base police to man the M-60 machine guns on the harbor patrol boats if the base got the orders to man the boats and protect the base waterfront if needed, (we never got the order).
The next several weeks we either got bused into work or rode our bikes in. We didn’t get to resume operations for about three weeks.
Several of us instructors were ready to terminate our shore duty and go back to sea to right the wrong that was committed. We were denied and told we were more important at the Training Center preparing tomorrow’s sailors.

Kelly Thomas-Henke
I was drinking coffee watching the news. When I went to work at Payless Shoe Source, my company had already downloaded software to accept donations via our registers to help with Disaster Relief.

Steve Bonspiel
I was there (New York City) that day. Ironworking at the Presbyterian Hospital on 166th.

Leif Steinbaugh
I was the operations officer of a squadron stationed in Japan. I lived off base and didn't have any U.S. TV channels. It was also late at night, I remember my wife yelling at me to come see the BBC channel she was watching. They locked the base down immediately. We reported in the next day and started to prep for deployment since that was why we were there.
They didn't have enough security personnel to secure the base so while we did Field Carrier Landing Practice, our aircrew also stood armed guard duty around the airfield. We got underway shortly thereafter and finished up a "minimalist" Carrier Qualification off of Iwo Jima. It was then that they told us that only a part of the Carrier Air Wing was deploying with the carrier and that special operation units would be coming on to the carrier.
My squadron was needed in Japan so we stayed behind while the carrier deployed with just enough fighters to protect itself and drop some off to defend Diego Garcia. The rest of the time the carrier supported the special operation units.
The one thing that I remember changing after 9/11 was that civilians would tell me "Thank you for your service." On 9/11, I had already been in 11 years and had done three combat deployments with the Iraqis shooting at us and not one single person had ever said that to me before.

Walter Lowell
11th day of Army Basic Training, Fort Sill, Okla.
We were out for our morning run.
As we were returning, we saw a long line of cars at the gate. There were not letting anyone on post.
As we were doing hygiene, the drill sergeant on duty called us all down to the formation pad.
He asked if anyone had family in NYC or worked in the Pentagon.
He had them stand by in his office.
He told us about the attack and the Twin Towers were in fire, but still standing.
He dismissed us to go back up to our bays.
Ten minutes later, the senior drill sergeant called us down. He had not shaved. And looked like he just woke up.
He told us about the attack and that the towers collapsed, before dismissing us.
As a class, we suspected the two versions of the story suggested that this was some kind of test.
Then they gave out phone cards and everyone got a mandatory phone call home.
That’s how we found out it was real.
The rest of the training was intense. Nobody quit. We came together. We were unstoppable.

Tracy Leach
I was in a Las Vegas hotel getting ready to go to airport and come fly back to Reno. I thought my husband was watching a movie on TV. He was silent and finally told me what was going on.
Our flights were canceled and I called car rental company to see if we could keep car and drive back to Reno and was told to return it. We had friends in Indian Springs pick us up in Las Vegas and drive us to Hawthorne. Headed out of Las Vegas, we saw people walking with suitcases in hand. Very sad.

Majken Selinder Nilsson
We were in Reno. My husband woke me up via telephone when he saw what was happening. He had just been finishing his overnight shift at Cisco Technologies.

Shari Westwood Temoke
I was in a van driving to Bald Mountain Mine. They came on the radio saying a plane (they thought small) had flown into one of the Twin Towers. We had no radios in our equipment, so none of us knew what happened. I’d taken a van and went to the office to go to the bathroom. The receptionist was watching the TV. When I came back out, I asked her what movie she was watching.
She said, ”It’s not a movie. This is in NYC right now.” She was crying. It couldn’t believe it. When I went back out to my scraper, I saw all the foremen standing around a pickup listening to the radio. We were all sickened.

Sandy Munns
Coming off shift at Reno Fire Dept. Station 3 (Moana). Walked out of the captain’s office and everyone was staring at the TV on top of the fridge. I asked “what’s going on?”
“Someone flew a plane into the World Trade Center!”
The second one hit as we watched. I looked at one of our Operators (he’s a Civil Engineer) and said “holy shit they did it this time!” Rick nodded. Others asked what we meant. I commented “ the towers are coming down.” “No way!” They said. Then the first one collapsed. They looked at Rick and me like we were nuts. The structure was designed for normal fire intensity from normal fuel loads. A high impact hit from an airplane, and not the intensity of fire from a couple thousand gallons of Jet -A. And they hit one-third of the way down. Enough mass to start falling then take the rest of the structure with it. Take a building construction class, guys. But it still freaked me out. It made me feel vulnerable, here in my own country, for the first time.

Liz A. McGarity
I was a sophomore in algebra class at CCHS with my freshman sister and brother in law. I decided to join the military after that and signed my contract with my parents the following year in December 2002.
Listened to our oldest brother talk about his unit going over to Iraq not long after 9-11.

Andrea Hiibel
I was living in Topaz and driving to beauty school in Carson City when I heard it on the radio. I had no idea what was going on until I got to school and my mom called me and told me to go home and stay safe until we knew more about what was going on.
It was a sad and scary day in America for sure.

Kristin Ballenger
I was in fifth grade, showed up to school (Numa) to find my group of friends sobbing, hugging, and afraid. I didn’t fully believe them when they explained what was going on. I remember watching the news in class. Going home early. Watching the news at home. Seeing my mom really sad and what seemed like anxiousness. Feeling scared, not fully understanding.
The sadness and pain in the air was so heavy. It was earth shattering.

Richard Keene
I was going to take lambs to the livestock auction before swing shift, but got glued to the TV. But my story is about two to four weeks before. On break working swing shift, some of us were talking and I said that things were too quiet. Every few years, it seems, some military action happens.
Just looking at the North America and the USA, there have been wars since the French-Indian War. Somewhere about every 20 years or so there have been wars that the USA has been a part of. Something somewhere is going to happen. Peace is nice, but we need to be ready for the next war.

Teresa Leon
I was working for NAS Fallon housing for Madison Services. I had just met this military man who made me laugh and grin ear to ear. He asked me if I would be his date for a barbecue on Sept. 11. I woke up morning of Sept. 11 to the Twin Towers on fire. Immediately I felt sick and full of sorrow.
I got ready for work and it took me three hours to get through the security gate because they were on high alert. Once I got to work the office was silent and somber.
My date Matthew Grant called me and said our date would have to be rescheduled as he was working base security and they were all called to duty. Sept. 11 we will be celebrating our 20th anniversary.

Victor Perez-Festin
9/11 was a day that changed our life in the military. We went from a peace-time military after Desert Storm that was reactionary to a war footing.
Since that day until today, I count the number of friends we've lost while I survived. May God bless those who have served and those that are still serving as we witness the fall of Afghanistan to the Taliban.

Kathy Selene
Around 7 a.m. that morning, I was preparing breakfast for our 8-month-old triplets when my husband called and asked if I was watching the news. He is an airline pilot, and said that all planes in the United States had been grounded! No one knew why, but obviously something serious was going on.
I turned on the TV and watched in horror as a large airplane flew directly into one of the towers of the World Trade Center! Like most Americans, I stayed glued to the television all day, reliving the tragedy of airplanes crashing into not only the WTC, but the Pentagon, and a field in Pennsylvania. It felt like we were under attack!
My husband was stranded in Salt Lake City for four days, unable to continue his trips, or to fly home. We mourn all who lost their lives that day, but I feel particular sorrow for the airline crew members who lost their lives. They were just doing their jobs, trying to get passengers from point A to point B.
One of those triplets (now 20 years old) is serving as an IT technician on the USS Somerset, which is named for the county in PA where flight 93 went down. The ship's motto is "Let’s Roll.”