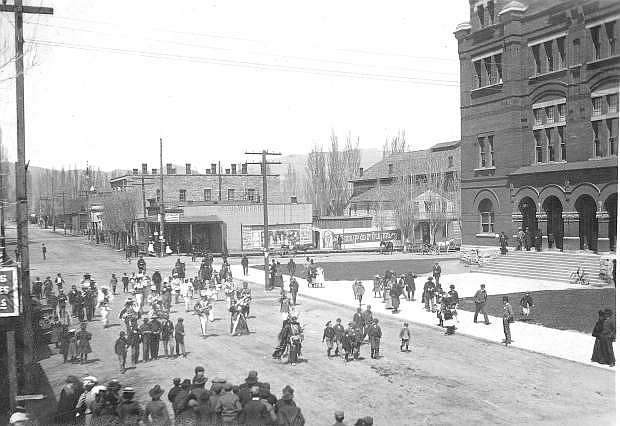 Wednesday
150 Years Ago
Prison break: Lieutenant governor was struck in the back of the head. He fell and convicts rushed on him, took his pistol and fired at him. Bob Deadman, a lifetime prisoner and servant in the Lieutenant Governor’s home, seized a chair and fought like a tiger, knocking down five prisoners, saving the life of the Lieutenant Governor. (continued)
130 Years Ago
The Great Show—McMahon’s Circus: There will be two exhibitions in Carson as among the many wonders Jo-Jo, the original Russian dog-face boy, will be here. Queen Jumbo, the largest elephant in the world, will also come in for a fair share of attention.
120 Years Ago
Pioneer lady dead: Mrs. L. M Dettenreider died after a protracted illness. She arrived in Nevada Territory in 1853. At the time of the Indian outbreak in 1860, William Pennison rode from this city on a saddle horse to notify her that the Piutes were on the warpath. Mrs. Dettenrider, and the employees at her ranch had barely time to mount swift horses. Looking backward they saw their house in flames, and their livestock worth at least $10,000 driven off. (Report)
100 Years Ago
Gypsies pass through: Five auto loads of gypsies, passed through the state on their way to California, incidentally stopping off at convenient points at Lake Tahoe. The short stay in Carson was appreciated. Ever since they have been on their trip, they have kept local authorities on the move.
70 Years Ago
Meeting of FOE Auxiliary: The meeting featured a fashion show. Fashions were loaned by Cash Mercantile, the Sheri Shop, Evelyn’s Style shop, Sprouse Reitz and jewelry by Capital Jewelry. Models will be Jerry Lamb, Jewel Barker, Imora Stone, Mary Fettic, Ruth Richards, Wilma McKenzie, Alameda Allen and Eleanor Supera.
20 Years Ago
Photo caption: Warren Engine Company volunteer keeps an eye on the Carson City School homecoming bonfire that has burned more than 60 pallets.
Thursday
150 Years Ago
Prison break: Matt Pixley, the proprietor of the Warm Springs Hotel, hearing the firing and imagining the cause, seized a 6-shooter and with Perasich, rushed into the prison yard to assist. He rushed in and commenced firing at the prisoners inside. Charles Jones, a young man from White Pine, fired at him. Pixley was struck below the left eye, and died. (continued)
130 Years Ago
All sorts: Abe Cohn is smiling harder than anybody. He sold fifteen overcoats yesterday.
120 Years Ago
Balloon ascension: The professor that takes the daring leap is one of the most noted in the business and will give the people a fall for their money. A balloon generally brings about a lot of excitement. People with heart failure are advised to bring a tonic with them.
100 Years Ago
People and notes of interest:
Miss Mary Margaret Shaughnessy, who is attending the University of Nevada, was a weekend visitor to her home in this city.
C. F. Cutts came over from Reno and took in the Pioneer Day celebration with Carson friends.
Gib Briggs on a fishing tour at Lake Tahoe says that fishing in Tahoe is a large joke.
70 Years Ago
Advertisement: “Carson Theater, ‘Robinson-Turpin Fight Pictures,’ exclusive-official-complete. All thrills in slow motion. Also, ‘Painted Hills’ in Technicolor with Paul Kelly & ‘Lassie, ’ filmed in the high Sierras.”
20 Years Ago
Pet parade: The Douglas animal welfare group is having its first pet parade at Lampe Park. Dogs will be available for adoption at Lampe Park and the Douglas County Animal Shelter. DAWG ill donate $25 for every dog adoption to the New York Firefighter Relief Fund for victims at the New York World Trade Center.
Friday
150 Years Ago
Prison break: Dr. Lee went to the prison to attend to the wounded officers. He found that Lieutenant Governor Denver had received a shot in the right hip, and shot had lodged near his spine. Henry S. Phillips was at the prison in a buggy when firing commenced and drove rapidly into town to give the alarm. Sheriff Swift and twelve or fifteen armed men started immediately but were too late to prevent the escape.
130 Years Ago
Advertisement: “New Groceries. Just opened and constantly arriving. Full Assortment Standard Family Groceries, Everything Fresh and New! Orders taken and delivered, free of charge. Patronage at my store on the corner of Third and Carson street, two doors South of Wells-Fargo office. GEORGE MEYERS.
120 Years Ago
Hazing at the University: A number of the senior class attempted to initiate a member of the freshman class, and the freshman drew a revolver and fired three shots at the intruders. One shot struck Harry Leadbetter over the heart, but because his clothes were thick, the bullet did little harm…. This will result in termination of this affair and hazing will go out of fashion at the University.
100 Years Ago
Advertisement: “Grand Theater, announcements: Jackie Coogan in ‘Peck’s Bad Boy;’ also a good comedy — 10 and 40 cents.
70 Years Ago
Moonlight ride: Kit Carson Riding Club is planning a moonlight ride; the meeting place is designated as Savage’s corral. Destination is Winter’s water trough west of town.
20 Years Ago
Photo caption: Joe Bob’s Chicken billboard is bothering Washoe Valley businesses because of the bird’s bare, human-like bras. Neighbors are crying “fowl.”