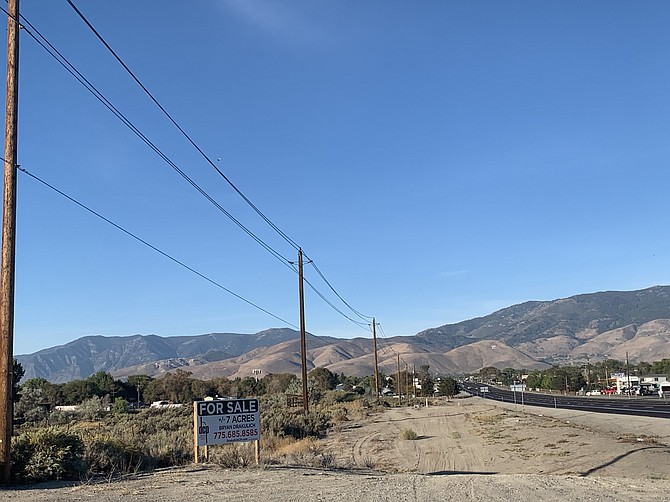 Carson Valley Meats is proposing a slaughterhouse in the industrial zone along Highway 50. Some of the closest residents to the parcel include a mobile home community to the west of the lot, and a neighborhood along E. Nye Lane, roughly northwest of the lot, across the highway.

Metro Carwash, a prospective Carson City business, is taking a second drive through the Growth Management Commission in the hopes that its revised water use application will be approved.
In August, the commission took no action on Metro’s application, encouraging the applicant to return with a significantly lower water use request.
The commission will meet Wednesday at 5 p.m. in the Robert “Bob” Crowell Board Room on 851 E. William St. Alongside the car wash water request, the commission also will review a special use permit for a proposed slaughterhouse on Highway 50 and expansion of Carson High School’s greenhouse.
Metro Carwash originally requested 46,000 gallons per day. The new request amends the figure to 29,500 gallons per day, but that still nearly doubles maximum water use for other car washes in the city, according to the agenda.
Similar local facilities use an average of 9,336 gpd, with a high of 14,904 gpd, according to a water use comparison in Metro Carwash’s application.
It is the Growth Management Commission’s responsibility to ensure the city does not outgrow its available resources, especially water resources.
During the August meeting, city staff recommended denial of the application, “based on the inability to find that the proposed use will promote health, welfare, safety or quality of life; or create quality jobs, or promote recreation and tourism,” according to the written agenda item.
But commission members expressed less unease with the business model, and more unease with the water request.
“Right now I will tell you that I like the idea of the business. I like the idea of fixing up the blighted areas and hiring people. I don’t like 46,000 gallons a day,” said Commission Chair Charles Borders during the meeting.
The revised application reduces the water use request for the city, but it also adds an option for the car wash to seek other water sources. If Metro is found at any point to be in violation of their water agreement, they would have more options for reconciliation.
The proposed conditions allow them to either modify the car wash to maintain compliance; apply for new growth management approval; offset the excess by using well water; or find water and license the rights to Carson City in an amount equal to the excess water used.
After hearing Metro’s request, the Growth Management Commission will adjourn and reconvene as the Planning Commission to review special use permit applications, including the prospective Carson Valley Meats slaughterhouse south of Highway 50 and east of Detroit Road.
In 2019, Karin Sinclair, owner of Carson Valley Meats, began the purchasing process for the 58-acre Storke Dairy off Centerville Lane in Gardnerville. The company sought a permit to operate a small meat processing plant, but Douglas County planning commissioners split on the issue in September 2019.
On Nov. 13, 2019, Douglas County commissioners conducted a public hearing where an estimated 400 people turned out. Eighty testified both for and against the use of the plant and after hours of public comment, commissioners unanimously voted against approving the permit.
Sinclair sued the county, and a year after the hearing a judge ruled that commissioners were within their rights to deny the permit.
The new slaughterhouse plans in Carson City call for a 5,000 square foot building and a 5,600 square foot corral area that would process no more than 60 animals per week, including beef, goat, lamb, swine, and wild game. Animals would remain in the corral area for no longer than 24 hours prior to processing. There will be a small retail component selling pre-packaged meats.
City staff is recommending approval of the slaughterhouse, with conditions restricting the facility’s exterior lighting, roadway, and stormwater.
“We’ve heard over and over that Northern Nevada ranchers and producers are in need of a processing facility, and we’ve received a lot of community support for what we’re trying to do,” said Sinclair, in a press release. “We’re excited to have found a location that meets all standards of approval for Carson City planning and community development with regard to water, sewer, traffic and drainage among other conditions the county has set forth.”
The slaughterhouse will have to comply with ongoing restrictions, including limiting their hours of operation from 6 a.m. to 6 p.m. Monday-Friday and only harvesting animals one day per week. They may process wild game without limitation. Unusable portions of animals must be sprayed with denature, removed from the site on the same day of harvesting, and handled by a rendering company.
“This project is essential to local ranchers and livestock producers,” Sinclair said. “Local facilities are able to continue processing meat even when large-scale facilities are impacted by nationwide events that could – and have – been impacted by events like the pandemic, which have created gaps in the food supply chain.”
The Greenhouse Project will also approach the commission, seeking to amend their special use permit to expand Carson High School’s greenhouse. They would like to add worm composting of food waste and nursery crop operations to their plans.
CHS’s greenhouse expansion is an ongoing effort run by the Greenhouse Project. They will be constructing a comprehensive teaching farm for agriculture students, and the composting aspect of the farm will help fund operations.
The commission’s full agenda with more details is available at www.carson.org. Navigate to the government tab, agendas, then “Planning Commission 09/29/2021.”
Those who would like to attend the meeting in person are required to wear face coverings, per the state mandate.
Public comment is welcome in advance of the meeting via publiccomment@carson.org or mailed to 108 E. Proctor St. In-person attendees are invited to comment during designated times throughout the meeting.