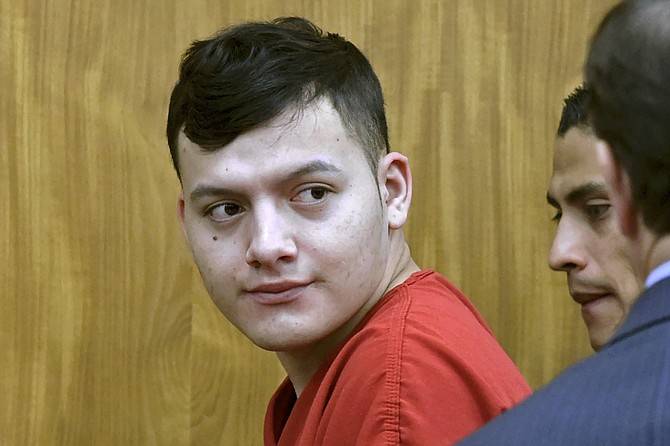 A man accused of killing two Gardnerville Ranchos women within days of each other in January 2019 will have to be tried in Douglas County, the Nevada Supreme Court ruled on Thursday.

Connie Koontz and Sophia Renkin were found dead within a week of each other, shot in the commission of a burglary.

Wilber Martinez Guzman is also accused of killing Gerald and Sharon David in their Reno home a few days later.

Prosecutors are seeking the death penalty in the case and wanted to conduct a single trial in Washoe County to spare the families of the victims the pain of going through the graphic evidence twice.

“We have been, and remain, in constant contact with the families of the victims and they know our commitment to seeking justice for the senseless murders of their loved ones,” Jackson said. “The Supreme Court’s ruling today does not change our commitment. Whether it be one trial or four trials, justice will be served.”

Hicks said that the decision only requires two trials but that doesn’t mean Guzman will avoid prosecution.

“While this was a split decision, we respect the Courts ruling and acknowledge it represents a setback in the timely resolution of this case,” Hicks said. "Regardless, the prosecution of Guzman remains my office’s highest priority. We will continue our steadfast pursuit for justice for the victims of these heinous crimes.”

A five-member majority of the high court ruled that Nevada law requires crimes such as murder be tried in the county where they occurred.

In an opinion by Justice Lidia Stiglich, the majority rejected prosecution arguments that Guzman’s acts ahead of the Douglas murders clearly tied his intent to both counties. That includes assertions of stealing the revolver used in the killings in Washoe County, taking it to Douglas County and committing the murders, then taking the weapon back to Washoe. He also allegedly used the same vehicle driving it back and forth during the week-long crime spree.

“In particular, we conclude there was no act or effect requisite to the consummation of the Douglas County offenses that occurred in Washoe County to justify venue there,” they wrote.

In the dissent, Pickering wrote that when acts resulting in the crime occurred in two different jurisdictions, venue is proper in either county.

She cited a 1962 murder case where the high court ruled just the opposite. In that case, the murder could have occurred in any of four northern Nevada counties during a drive from Elko to Reno, but there was no way to know exactly where it happened. It was tried in Washoe where the murder was discovered.

She said she would follow that case as precedent and rule that, “a sufficient connection exists between the offense and the forum county based on the defendant’s acts…”

“This is to say nothing of the level of extreme anguish communities, victims, victims’ families and criminal defendants face at the prospect of the sort of duplicative proceedings the majority’s approach would foster,” the dissent states. “There is no legal or practical demand for such a result here because sufficient connections exist between the Douglas offenses and Washoe to lay venue in the latter county.”

Hicks and Jackson said that the Guzman case saw the murders of four people intertwined over three jurisdictions over a two-week period of time.

“Both DA’s Offices believe Nevada statutory authority and prior Supreme Court case law supported the decision to try all the crimes in a single venue,” the prosecutors said in a statement. “Moreover, judicial economy and the rights of the family members of the victims reinforced that decision.”