Joe Santoro: Strong latest Pack QB to get no respect 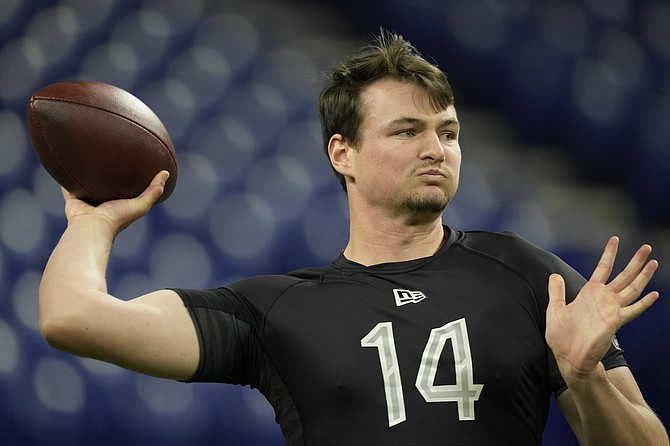 Nevada quarterback Carson Strong throws during a drill at the NFL scouting combine on March 3, 2022, in Indianapolis.
Charlie Neibergall/AP

Carson Strong, it seems, is being disrespected by the NFL. The former Nevada Wolf Pack quarterback, according to most every NFL so-called draft expert, is considered the sixth most desirable quarterback in this weekend’s draft behind Kenny Pickett, Malik Willis, Matt Corral, Sam Howell and Desmond Ridder.

All the 6-foot-4 Strong did last fall was throw for 4,175 yards and 36 touchdowns in just 12 games. The season began with Strong being touted as a potential first-round draft pick and ended with him as a likely third or fourth round pick this weekend.

The way Strong’s stock has fallen despite his outstanding performance on the field this year is all the proof you need that the NFL has no clue how to judge a quarterback. The same draft experts that rank Strong as the sixth-best quarterback in the draft also are quick to point out that Strong might have the most arm talent in the draft. Throwing the football, apparently, doesn’t mean as much in the NFL as it once did.

Strong, as we’ve read and heard the past four months, doesn’t fit the mold of the modern, mobile quarterback. Forget arm strength, accuracy, intelligence, leadership, toughness and the ability to read defenses, all the things Strong excels at. The one thing he doesn’t do well is the reason why he will likely be the sixth quarterback off the board this weekend. He doesn’t run well, thanks to more than one knee surgery.

What the draft experts don’t tell you is that Strong never missed a game in college because of his fragile knees. But that doesn’t matter. All that matters is that he doesn’t run like the wind and he has had knee surgery. So, for that reason alone, despite his obvious strengths, he’s no better than the sixth best quarterback in the draft. Back in 2000 another guy who couldn’t run well was the seventh quarterback taken in the draft. Don’t be surprised if Tom Brady runs up to the podium to accept his eighth Vince Lombardi trophy in February.

But only three other Pack quarterbacks have ever been drafted. Pat Brady had to wait until the 155th overall pick in 1952 before he was taken in the 13th round by the New York Giants, John Dutton was taken 172nd overall (sixth round) in 1998 by the Miami Dolphins and Jeff Rowe was the 151st overall pick (fifth round) in 2007 by the Cincinnati Bengals.

Other standout quarterbacks at Nevada weren’t so fortunate. Eric Beavers, Chris Vargas, Mike Maxwell, David Neill, Cody Fajardo and Ty Gangi weren’t drafted at all despite putting up numbers worthy of draft consideration. Some of them could even run well.

The former Pack quarterback that should hold the biggest grudge against the NFL (other than Kaepernick, that is) is Dutton. Dutton was as talented as any quarterback that ever played at Nevada. He was big (6-4, 220 pounds) and strong with a big arm. Dutton came to Nevada after two seasons on the bench at the University of Texas and lit up the Northern Nevada skies with footballs.

In just two seasons (1996-97) he passed for 6,276 yards, 42 touchdowns and just 12 interceptions. And that, unlike the last few years, was when the offensive coordinator used to call some running plays.

After bouncing around a few NFL training camps, Dutton then spent 2000-2013 proving the league made a mistake on him by passing for 37,981 yards and 752 touchdowns in the Arena League. He even won an Arena League championship and appeared on the cover of an Arena League video game. He was Carson Strong at Nevada before Strong was even born (in 1999).

Nevada wide receiver Romeo Doubs and tight end Cole Turner are also expected to get drafted this weekend, likely on Saturday in rounds 4-7. Doubs has dealt with a knee injury that prohibited him from doing anything at the Senior Bowl and NFL scouting combine but seems to be rising on draft boards to about the 15th best wide receiver available this weekend.

Turner, too, is generally considered about the 12-15th best tight end in the draft, though two of those ranked ahead of him are also from the Mountain West (Colorado State’s Trey McBride and San Diego State’s Daniel Bellinger). The last time the Pack had at least three players drafted was in 2012 when linebackers James Michael Johnson and Brandon Marshall, cornerback Isaiah Frey and wide receiver Rishard Matthews were picked.

Strong, Doubs and Turner will be the first players that Jay Norvell brought to Nevada that were drafted.

The Wolf Pack announced last week that Doug Knuth is out as athletic director after nine years. Knuth’s time at Nevada has to be considered overall as a success, given that he hired quality coaches such as Jay Johnson and T.J. Bruce (baseball), Jay Norvell (football) and Eric Musselman and Steve Alford (men’s basketball).

Dick Trachok is the only athletic director in school history that even compares to Knuth when it comes to hiring standout coaches in the high-profile sports (football, men’s basketball, baseball). Trachok hired Chris Ault (football), Gary Powers (baseball) as well as Jim Carey and Sonny Allen (both in men’s basketball).

Ault never had to hire a baseball coach and he struck out in football when he hired Jeff Horton, Jeff Tisdel and Chris Tormey though he can take credit for hiring Trent Johnson in basketball.

Cary Groth also never hired a baseball coach and merely looked down the hall to hire basketball coaches Mark Fox and David Carter. She also hired Brian Polian in football as her parting gift to the university before leaving the athletic director’s office.

Knuth’s strange departure brings up questions about whether or not his departure was in the works long before last week. He did, after all, hire football coach Ken Wilson last December in a blink of an eye, seemingly without doing much research other than looking at Chris Ault’s 1995 university phone directory. The Wilson hiring was out of character for Knuth considering it was such a departure from his previous hires (Johnson, Norvell, Musselman and Alford). The hiring of Wilson seemed to come out of the Jake Lawlor-Dick Trachok-Chris Ault handbook for hiring coaches. It was truly an anti-Knuth type of hire.

And now, roughly four months later, Knuth is gone. He leaves the university with a rookie head coach in football and a basketball coach (Alford) that just won 13 games and still has seven years remaining on his guaranteed contract. And we thought Groth’s parting gift of Polian left a lot to be desired.

Did Knuth leave the Wolf Pack athletic department in better shape than when he took over in the spring of 2013 for Groth? That’s up for debate. But, considering the university’s announcement last week, things were obviously not trending in the right direction.

A lot of the same problems that plague the university now were also a concern back when Knuth was hired in the spring of 2013. The football, men’s basketball and baseball teams still play in the same outdated venues. Norvell outlined the problems in the athletic department (a lack of support from the community and athletic department) not so subtly when he jumped ship last December. Norvell’s leaving just might have signaled the beginning of the end of the Knuth era, a development that prompted Knuth to hastily hire the new football coach. Norvell’s departure for another school in the same conference was the first sign we were given that not everything in the Knuth athletic department was as positive, promising, rosy and wonderful as Knuth always told us it was.

The 2021-22 athletic year has to be one of the strangest and most disappointing in Wolf Pack history, given the expectations going into the year.

It all started with the football team, a talented and entertaining group that should have rolled to a Mountain West title, a place in the Top 25 rankings and, to top it all off, a meaningful bowl game. We instead got one of the most disappointing seasons in school history, no conference title and yet another meaningless bowl game made into a joke by Norvell’s thievery of the roster and the coaching staff.

The men’s basketball team also started with a ton of potential and promise and quickly morphed into a 13-18 disaster. Alford never could stop the bleeding on the court and also off it when his three best players abandoned him and the program.

And now Knuth was shown the door, leaving a struggling athletic program without a true leader in a difficult time. Hopefully the search for the new athletic director will be much more thorough and complete than the one Knuth conducted when looking for the next head coach of his most important sport last December.