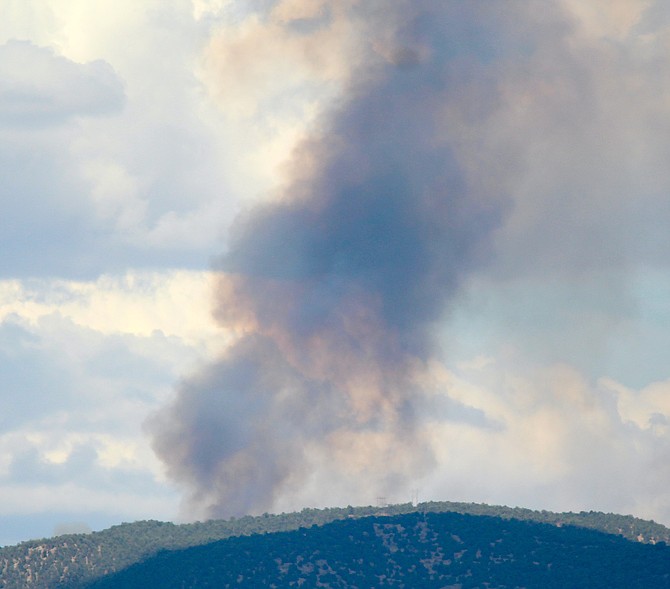 Smoke rises over the Pine Nuts from the Lebo Fire estimated at five acres burning in sage and piñon juniper.

The first real wildfire in the Pine Nut Mountains of the season was essentially contained within four hours of the first sighting of the plume on Tuesday.

The Lebo Springs Fire burned 27.5 acres of piñon juniper and sage near Sunrise Pass Road, according to the Sierra Front Interagency Dispatch Center.

Four single-engine air tankers were assigned to the blaze, which let firefighters get a hose line around the fire by 6 p.m.

About a half-hour after the first report on the Lebo Fire, a second fire was reported at the top of Sleeping Elephant Hill in Topaz Ranch Estates.

That fire was kept to an acre, with forward progress stopped by 4:30 p.m. and the Sierra Front reporting it was contained. Rain that fell in the south county on Monday evening helped extinguish that fire.

Both fires may have been sparked by lightning from Monday’s storm. While there weren’t many strikes recorded in the Pine Nuts, with generally 100 percent chance of ignition, it wouldn’t require many to start a fire.

Thunderstorms are forecast for this afternoon and Thursday and could bring more lightning, but also heavier rainfall in places.

Firefighters are responding to fires on either end of the Pine Nut Mountains this afternoon.

A fire near Lebo Springs due east of Johnson Lane was reported around 3 p.m. The fire is just off Sunrise Pass Road and is reported to be five acres burning in sage and piñon-juniper.

Four single-engine air tankers are working that fire, according to East Fork firefighters.

Another fire was reported in the south county at the top of Sleeping Elephant Hill. That fire is reported to be a quarter acre in size burning in light grass.

Units from several surrounding jurisdictions are coming to aid firefighters.

Fires may have been sparked by lightning on Monday.

As of 3:50 p.m. there is no report that any of the fires are threatening structures.