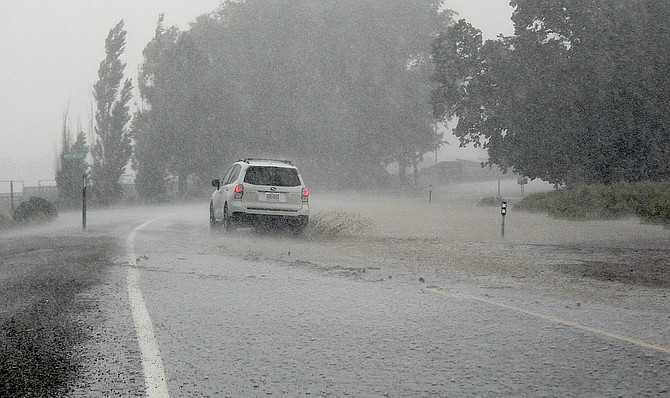 A Subaru splashes through water over Foothill Road on Thursday afternoon.

A home just over the state line from Douglas County off Foothill Road was hit by a landslide that sent 5-6 feet of mud inside, according to an Alpine County firefighter.

Located on Horsethief Circle at the base of the Carson Range, the home would have borne the brunt of heavy rain that fell in the southern part of Carson Valley.

Rain was reported falling at more than 2 inches an hour for a time in Fredericksburg, less than a mile away.

Thursday’s flood watch turned into an opportunity to watch some flooding around 2:30 p.m. as nearly 2 inches of rain fell in 90 minutes in southern Carson Valley.

Mud and water washed over Foothill Road south of the Jobs Peak Ranch Trailhead, forcing vehicles into the oncoming lane.

A flash flood warning was issued for Douglas and Alpine counites through 3:45 p.m. after radar indicated heavy rain over several burn scars.

“This is a life-threatening situation,” forecasters said. “Heavy rainfall will cause extensive and severe flash flooding of creeks...streams...and ditches in the Tamarack Burn Scar. Severe debris flows can also be anticipated across roads. Roads and driveways may be washed away in places. If you encounter flood waters...climb to safety.”

Forecasters said there is a chance that riverbanks and culverts will become unstable, so residents are warned to stay clear of water ways.

Multiple lightning strikes were reported across the Valley including one right at Van Sickle Station in Genoa and another near Sheridan that knocked out power to a handful of NVEnergy customers.