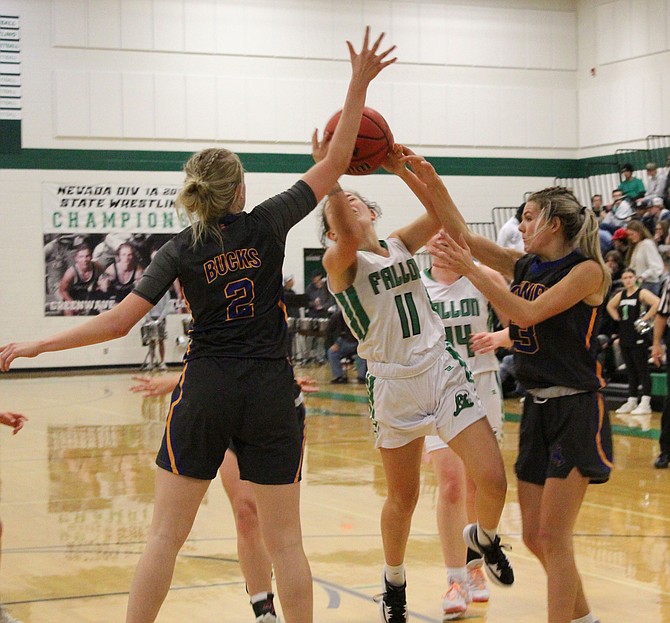 Fallon’s Zoey Jarrett tries to go up to the basket against Lowry in Friday’s 60-18 loss.

After watching Fallon spend three of the last four seasons atop the mantle, the Buckaroos girls basketball team is making the case as the team to beat in the Silver State.

Lowry made the short trip to Fallon on Friday night to open play in the Northern 3A East, beating Fallon 60-18 at the Elmo Dericco Gymnasium to improve to 9-3 on the season and 1-0 in the Northern 3A East. Fallon, which fell to 11-6 overall and 0-1 in the division, hosts Fernley, which lost a pair to Elko and Spring Creek in the final seconds last week, tonight at 6 p.m. Dayton comes to Fallon on Saturday.

“Lowry has one of the most experienced teams coming back,” Fallon coach Kevin Wickware said. “They’re a very good basketball team. We didn’t handle the pressure as well as we should have.”

With Fernley coming to town tonight, Fallon gets another crack at its first win in the 3A East. The Vaqueros led both Spring Creek and Elko at home last weekend, only to see the visitors come from behind in the final minute to steal the win. Fernley has lost three in a row.

Wickware likes his team’s chances against the cross-valley rival.

“We’ve seen them play,” he said. “Height for height, we’re matched up pretty well. I like where our guards are. I like where we sit. It’s going to come down to whether we execute shots or not.”

Lowry found its shooting touch from the outside, knocking down seven 3-point field goals on the night, as four girls scored in double figures, as the Lady Bucks shared the wealth throughout the lineup.

“We actually started slow for what we wanted to do, but picked it up and played a lot better in the final three quarters,” said LHS coach Jesse Zamudio. “During practice, we talked about cleaning up the little things a bit and getting back to the fundamentals and playing as a team.”

Emily Backus scored seven of Lowry’s 14 points in the opening eight minutes of play. The Lady Bucks held the Greenwave without a field goal for nearly the first six minutes of the contest.

Lowry’s pressure handcuffed Fallon in the first half. Coupled with the Buckaroos’ hot shooting, the Lady Wave fell into an inescapable hole.

“We haven’t seen anything at that level yet. That was the first time we’ve seen an experienced pressure the whole time,” Wickware added. “Lowry shot the ball really well. It was just the combination of pressure and ability to hit shots. We played pretty good defense. Lowry just hit a lot of shots from the outside.”

“They girls played awesome tonight,” Zamudio said. “It didn’t matter who we had on the floor, they worked together, which was great to see. When they play like this, they are fun to watch.”

McKenzi Petersen started a 9-0 run at the beginning of the second quarter and Backus connected on two more 3-pointers to push the lead to 19 points at 26-7. Churchill County made its only field goal of the second quarter with 4:21 to play. Kuskie got into the long distance shooting with her first 3-pointer, helping Lowry end the half on an 11-0 run and lead 37-8 at the break.

“We took a step back in practice and worked on some things,” added the coach. “I wanted the girls to shoot the ball a little more. I gave them a little more liberty to do that and the shots they took were good.”

Lowry put what it did in practice all week to work in the opening seconds of the third quarter, as Petersen stepped back behind the arc and knocked down a 3-pointer. Petersen stands at 6 feet, 1 inch, the tallest player on the team.

Wickware, though, was pleased with the team not quitting as the game progressed.

“We didn’t stop,” he said “(Lowry’s) continued ability to knock down shots was tough to watch. Our girls didn’t stop. They kept working hard.”

Petersen led all scorers with 15 points and nearly outscored the Greenwave on her own, Backus added 13 points, including three 3-pointers and Hannah Whitted and Savannah Stoker added 12 and 10 points, respectively. Kuskie netted eight points and Hernandez two.