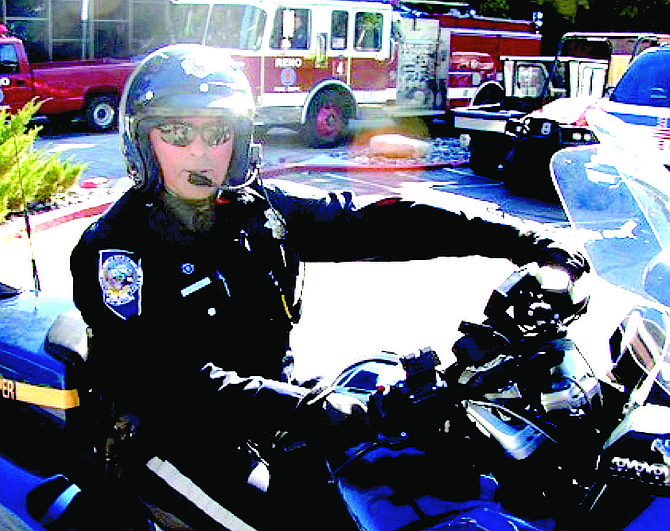 A photo of Trooper Dan Lopez on his motorcycle.

A voice of reason on the roads and in life was silenced when retired Nevada Highway Patrol Trooper Danny Lopez was killed on May 21 at age 56.
A celebration of Lopez’s life is 5 p.m. Friday at Jethro’s Oven & Grill 1281 Kimmerling Road, Gardnerville.
On Wednesday, the Nevada Highway Patrol said Lopez was killed in a vehicle rollover at Glenbrook.
Between 2010 and 2015, Lopez served as a spokesman for the Nevada Highway Patrol, spelling Trooper Chuck Allen before both men retired.
Lopez’ wife and daughters remembered Lopez on Thursday.
Born and raised in Carlin, a town in Elko County, Lopez was nicknamed “Boonie.” His dad worked for the Nevada Department of Transportation, and Lopez had the advantage of growing up in a small town.
A Carlin Railroader, Lopez played multiple sports in high school, and was the quarterback for the football team.
“Boonie, Boonie, he’s our man, if he can’t do it no one can,” daughter Katie Bohn said. “He always encouraged us to be the best. If I was interested in anything, even if he didn’t know it, he would practice and help us.”
After graduation, he followed in his father’s footsteps and went to work for the Nevada Department of Transportation starting a 35-year career with the state.
“His first job was putting those little stickies on the road in the hot sun in Reno,” Bohn said. “That’s where he started. He was promoted to Gardnerville supervisor.”
It was in that latter role in 1995 that he first appeared in the pages of The Record-Courier, surveying a downed tree blown over Centerville Lane after a 50 mph windstorm.
Lopez was also photographed spreading grindings in the parking lot of the new Fay-Luther trailhead and talking to a resident about a compost pile back in 2004.
It was at a Gardnerville gym in 1999 that he met wife Kelly Petite.
“I was at the gym and noticed this good-looking guy, and my friend Craig introduced us, saying ‘you guys should hang out,’” she said. “I told Dan I didn’t really want to see anyone, right now, so Dan said ‘here’s my phone number. I know you’re a runner, so we’ll go running together.’”
That happened twice, once when Lopez was training to be a trooper and the second time he disappeared and then turned up again with the car.
“I loved him to infinity and beyond and he will be missed so much,” Petite said.
It was around 2006 that Lopez took a chance by switching to the Nevada Highway Patrol, Bohn said.
“He took a big risk and went to the academy,” she said. “He was the oldest guy in there. He just thrived. There was no job he loved more than being a troop.”
“And being on a bike,” Petite added.
“He was my best friend,” Bohn said. “He was an amazing grandfather. He was so young and the life of the party. He shone so bright and everyone he met loved him. We didn’t get him as long as we should have. He always told me how proud he was of me.”
Daughter Megan Rohrbacher said Lopez radiated light.
“He loved life, you could see it in his eyes,” she said. “I feel like he always made a friend anywhere he went.”
Lopez loved the water and would take his daughters wakeboarding.
Bohn said that when he visited her home near the sea, he would go to the pier for oysters Rockefeller and clam chowder.
“Which was funny because he hated seafood,” she said.
Similarly, he would profess a dislike for dogs, but he loved dogs.
He and pet Pita would go for a walk every day.
“He was very firm, whether it was us or the dogs, it was just what you needed. It was just the right mix.”