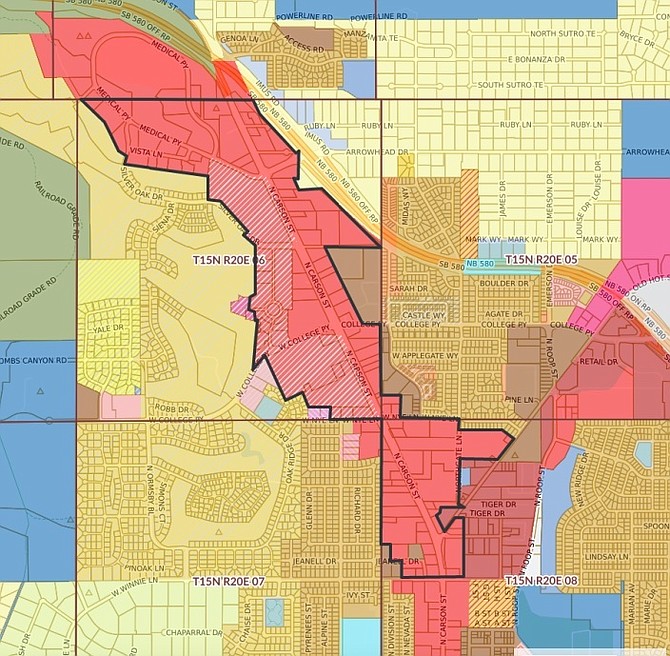 After being asked to continue their proposal at the Carson City Planning Commission last month, representatives of a marijuana retail company will be returning to planning commissioners Tuesday with two proposals to open more space in city zoning for marijuana retail shops and medical dispensaries.

The meeting starts at 3 p.m. in the community center.

Green Thumb Industries, represented by Will Adler, is proposing two options. The first would amend zoning code to allow dispensaries and retail stores as a conditional use in the retail commercial zone as well as open all general commercial and general industrial zones to the same use. The second option proposes marijuana shops be allowed as a conditional use in retail commercial but with specific boundaries. This option also proposes expanding the range where marijuana shops could be in the general commercial zone.

Currently, marijuana outfits are limited to areas of South Carson Street and the eastern stretch of Highway 50 leading out of the city. The second proposal would build on some of these boundaries but add a section of north Carson in the retail and general commercial zones where marijuana outfits could be allowed.

Chicago-based Green Thumb owns the RISE dispensary in south Carson and is searching for a new store. It holds two of four state licenses for the Carson area as allowed under state law.

After statewide legalization of recreational marijuana in 2016, Carson City limited the number of retail shops to two and used the zoning location requirements from a 2014 ordinance. That ordinance focused on medical dispensaries at the time and required a special use permit for medical outfits. The special-use requirement was later extended to retail shops.

On Sept. 15, the Board of Supervisors approved expanding the number of retail establishments from two to four to match state law but did not change the location requirements.

Adler previously said current zoning is too restrictive and presents a hardship for a new industry. He said state regulations prohibit dispensaries near casinos but later clarified this applies to communities with more than 100,000 people. City setback requirements stipulating distance from schools and other public places still apply.

“The current zoning bubbles are too restrictive,” he said during the Oct. 26 planning commission meeting.

According to the staff report for Tuesday’s meeting, city planners are recommending denial of the proposed zoning changes, concerned about compatibility with surrounding land uses.

“Based on the information contained in the application, staff cannot make this finding,” Planning Manager Heather Ferris wrote in the staff report. “The applicant has the burden of proof to provide facts supporting the proposed zoning code amendment.”

The planning commission’s recommendation will go to the Board of Supervisors.

The project, located at 4500 N. Carson St., in the retail commercial zone, would also include 12 caregiver apartment units.

A special use permit is needed to allow the care facility and multifamily units in the retail commercial zone.

The planning commission is authorized to approve or deny special use permits. However, planning staff is recommending the commission continue review of the project to its December meeting.

• A special use permit to allow the setup of a temporary sales office, model homes, and signage on parcels zoned single family 6,000 (minimum parcel size in square feet) along Wildcat Peak Drive.

The office and model homes would be part of the Blackstone Ranch development. The applicant is Lennar Reno.