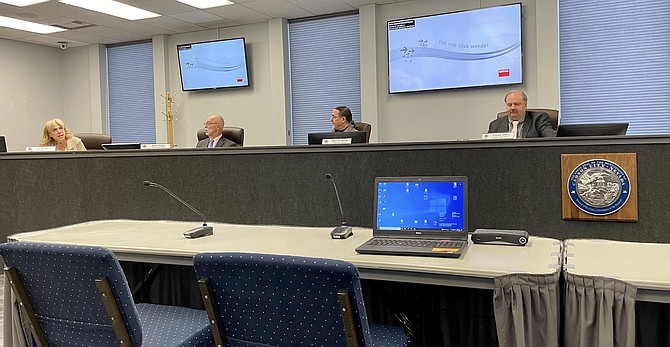 Carson City supervisors at their meeting Thursday during which they recognized a new employee association in the District Attorney’s Office.
Photo by Scott Neuffer.

A new employee union in the Carson City District Attorney’s Office has been recognized by the Board of Supervisors.

Supervisors Maurice White and Stan Jones voted against the measure.

According to an Oct. 11 letter and several attachments submitted by CCDDAA President Kelly Brandon, the group is comprised of seven deputy attorneys in the DA’s criminal and juvenile divisions, representing more than 50 percent of employees in the bargaining unit.

“The goal of the association is to ensure the highest quality service to citizens of Carson City through the establishment of employment agreements that will allow for retention of top performers in this field,” Brandon wrote in the Oct. 11 letter. “The administration at the District Attorney’s Office has created a cohesive, productive work environment that allows employees to succeed. However, the administration’s exhaustive efforts to modernize compensation structure to be competitive with surrounding counties have been largely unsuccessful.

“As a result, we endeavor to remove that burden from the office administration and negotiate directly with the city with the sincere belief that the result will be superior service to the citizens we all have the honor to serve.”

The letter also says that each member’s pledge and the association’s bylaws contain “a no-strike clause in accordance with statute.”

The new association’s bylaws do state no member or the association itself will strike against Carson City “under any circumstances.”

Brandon told the Appeal on Thursday association members support elected District Attorney Jason Woodbury and the issue is with the city regarding pay compared to other counties.

“We’re happy the board voted to approve the group,” Brandon said, emphasizing the group’s goal is to serve Carson City well.

White explained his no vote Thursday after the meeting.

“While I recognize the right of employees to organize, I also recognize the unsustainable pressure the organized groups are putting on the city’s ability to provide the services and build and maintain the required infrastructure our residents, businesses, and visitors expect from our government,” he told the Appeal.

In other action, supervisors:

The applicant, Sarah Martin, is renovating the Rinckel Mansion on North Curry Street into a historic inn. The board unanimously approved the first reading in October.

“It’s going to be a wonderful asset to Carson City,” said Bagwell.

• Voted 4-1 to approve, on second reading, an ordinance adding breweries and tasting rooms as conditional uses in the tourist commercial zoning district.

Shoe Tree Brewery off Old Hot Springs Road is seeking to renovate a warehouse on an adjoining parcel into a brewery and tasting room, hoping to double beer production.

The board approved the first reading 4-1 in October with White voting no. White voted no on the second reading as well.

“I feel like zoning changes need to happen at the time we do the master plan review,” he said Thursday.

• Voted 4-1 to approve a resolution to transfer Carson City’s 2023 private activity bond cap to the director of the Nevada Department of Business and Industry for construction of phase 2 of Sierra Flats apartments, located at 3320 Butti Way.

Under state law, the city may allocate a share of state money set aside for tax-exempt loans to fund industrial development and affordable housing projects.

The allocation would help fund construction of phase 2 that will include 80 units of affordable housing. The exact dollar amount of the bond cap transfer will not be clear until 2023.

• Heard a presentation from Rick Cooley of the public works department on snowplowing operations.

Cooley said the department receives calls about snowplowing from those on residential streets. He said during a storm, however, the city’s focus is on primary roads for emergency access and bus routes for Jump Around Carson and the Carson City School District.

Supervisor Lisa Schuette thanked Cooley and the department for their work, noting there are “so many layers to snow removal.” 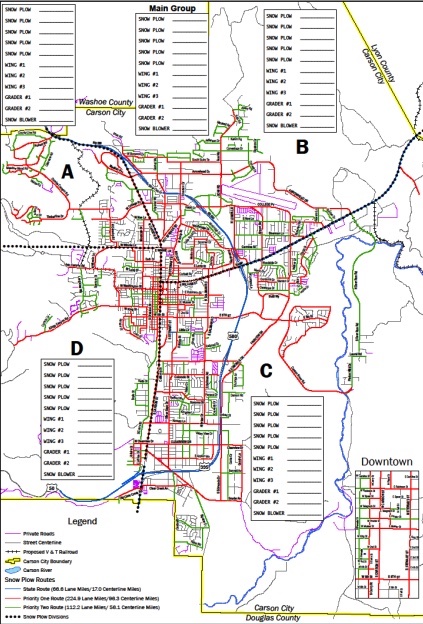