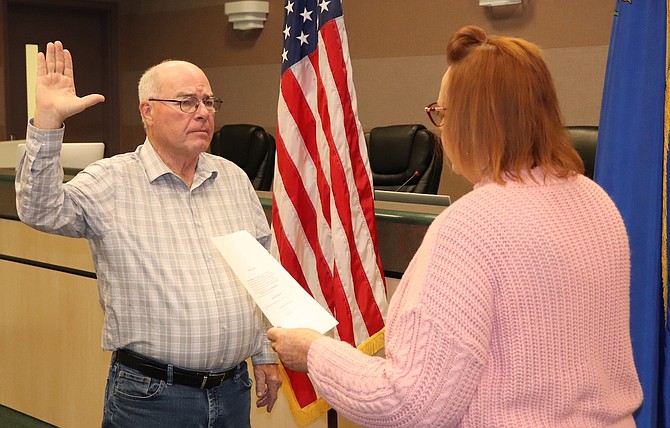 Harry “Bus” Scharmann was sworn in Friday as Churchill County commissioner for District 3.

Scharmann replaces Dr. Greg Koenig, who was elected to the State Assembly District 38. Scharmann will serve out the remaining two years of Koenig’s term on the county commission.

Scharmann previously served on the county commission for eight years before he lost his re-election bid in 2020 to Dr. Justin Heath.

Scharmann, a lifelong Republican, spent 35 years with the Western Nevada College’s Fallon campus and served as dean before retiring. He also spent one year as interim superintendent for the Churchill County School District.

During the selection pross held by the CCRCC, Scharmann said he brings experience to the commission and wants to share his expertise with the new commissioners. Scharmann said water is the most important issue.

The longtime county resident said he wants to protect the flow of the Carson River, which fills the Lahontan Reservoir and continue the modernization of the Naval Air Station Fallon’s training range.

Scharmann said he’s also concerned with housing, especially since 23% of sailors and their families assigned to NAS Fallon don’t live in the county.