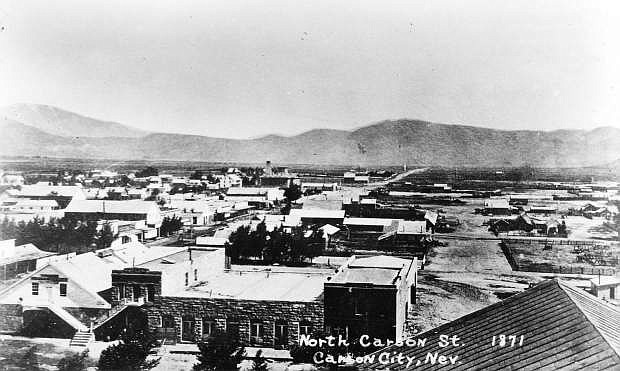 Advertisement: “Eagle Market, corner of Carson and Proctor streets, Carson City. Mat. Rinckel, proprietor. At this market can always be found the very best quality of beef, mutton, pork, and veal. I purchase and slaughter my own cattle and will have none but the best quality. My customers can have whatever they order… I mind my own business. Mat. Rinckel.”

The Aurora: There was a creditable display of Aurora Borealis. A pale white mist extended about five degrees from the horizon, at intervals streaks of ruddy light that changed to a bright red glow like the reflection of a distant fire. This went on for several hours, and the sight was enjoyed by crowds on the streets.

Carson High School Jazz: Geometry class contest – the plane geometry class is going to have a contest. The sides were chosen by two leaders, Mildred Smith, leader of the Pythagoreans and Edward Patterson, leader of the Patonian. The object of this contest is to see which side can give the most theorems correctly, getting a higher score. The losing side gives a feed to the winning side.

Photo caption: Viewing coronation fashions, Queen Elizabeth II chats with models at a fashion show given at the Claridge Hotel by the Incorporated Society of London Fashion Designers. Princess Margaret attends with queen to see the lush gowns. (International)

Perotites: Ross Perot who is running for president is gathering support in Douglas County. Ross Perot’s organization called “United We Stand” will be up and running by January and in Carson City.

Sutro superintendent: Captain Lyons has found Carson dull and taken up his residence at Sutro. This new town has sprung up at the terminus of Sutro Tunnel. He receives a handsome salary as superintendent and pay master. We wish him best tidings as the world moves and Sutro grows.

In brief: The cautious turkey is putting himself on low diet and assuming a sickly air.

Never forgets: There is one man outside of Nevada who never forgets the orphans in it. Frank Boscowiktz has sent 50 pounds of fine candies to superintendent Grimmons of the Orphans Home to distribute among the children. He has a big heart.

Discrimination: An attempt has been made on Mr. Berry of Virginia City to disqualify him on account of blindness. Mr. Berry was elected county commissioner of Virginia City and was recently threatened with a suit to oust him. A decision made last month by the Supreme Court that blindness was no disqualification to office holding in Nevada.

Gas rationing books: The last opportunity to register for gasoline rations book is in the auditorium of the Carson elementary school building, three blocks west of Carson Street. Applicants must have applications filled out and the serial numbers of the five tires for the vehicle.

Kings Canyon: A plan was approved to build 290 homes on 201 acres of ranchland in Kings Canyon. After more than a year of negotiation between the project engineer, city officials and neighbors in the canyon, the board of supervisor gave unanimous approval.

Gas fizzled out: Consumers were notified to get their coal oil lamps and candles ready against the approach of darkness. John G. Fox, the secretary and treasurer of the Maxim Co., has ordered and done everything to keep up a supply of gasoline.

A bright devil: Billy Plunket was the name of a bright young lad who applied at the Appeal office for the position of devil. When an advertiser came in to suggest that his business interests were not receiving the attention from the paper that his rival was getting, the devil was sure to speak up with “Well, if you don’t like our style of running a paper, take your blasted ad out. We are crowded for space anyhow.”

Mighels-Bryant married: The Reverend George R. Davis, at the residence of the bride, married Henry Rust Mighels to Ida Bryant, both of Carson City. The house was beautifully decorated with flowers and the presents were numerous and elegant.

Eagles Club visits newlyweds: Mr. and Mrs. John Olding, the newly married couple, were visited and serenaded in regular style. The couple were routed unceremoniously from a warm bed on a cold night. They took the visit good naturedly. It was a jolly home-coming greeting, and all enjoyed the event.

Catastrophe: Some graceless and ubiquitous villain or villains put an obstruction for the train from Virginia (City) which came near upsetting and threatening the lives of all on board. Five telegraph poles and a tie were placed across the track, a mile and a half this side of Washoe City. The Virginia and Truckee Railroad locomotive called the “Reno” went bravely through it and came out unhurt. We hope that the villains who aimed at the destruction of life and happiness, may soon be bagged, then a hasty trial and a short cord!

The Lights o’ London: The lovely lithographic work which Palmer puts on the dead walls is as good as the play. “Lights of London” is a play bursting with sensational incident and full of pathos, tears, laughter, and stage effects.

All sorts: Frank Murphy’s wife presented him with a nine-pound girl. All hands doing well.

The wife of Jesse Newman of Geo. Meyers grocery store presented him with a nice eight-pound girl. The Appeal acknowledges a relay of wine.

A joke: A gentleman from San Francisco rushed into the Appeal office and asked: “Is that a joke over at the Capitol?” The gentleman explained there was a sign tacked on a tree that says: “Warning: Stop. Read. Think, $500 fine for walking on the grass.”

Photo caption: Matthew Kleinfield, looks over trays of hot cinnamon rolls at Sweetline’s booth in the Old-Fashioned Christmas Fair at the Community Center.