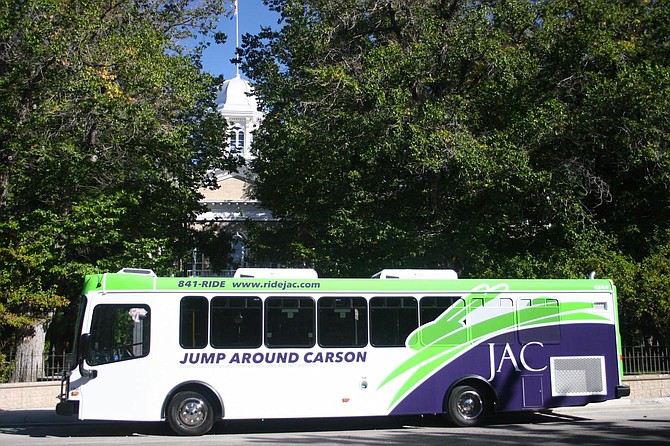 A Jump Around Carson bus in front of the Capitol.

On Nov. 9, the Carson Area Metropolitan Planning Organization approved a grant submission to NV Energy for $225,000. If awarded, the money would be used to develop a zero-emission transition plan that would qualify CAMPO and Jump Around Carson for federal funding.

“The plan will be based on guidance from the Federal Transit Administration,” said Carson City Transportation Manager Chris Martinovich.

This fiscal year, NV Energy has made $6 million available for grant funding, with no local match required. CAMPO could use a sliver of that to develop a plan in accordance with standards set by the FTA.

“There are specific elements that have to be included in the plan such as a review of long-term fleet operation needs; resource needs in terms of facilities, technologies, and associated costs; coordination opportunities with utilities or alternative fuel providers; and training and education opportunities for staff who will need to maintain a fleet of electric or other low- or no-emission vehicles,” Martinovich said.

The city plans to evaluate potential partnerships with other regional transit agencies and possibly the Carson City School District.

Martinovich cautioned any transition will be a slow process.

“Should we be awarded the grant, the development of the plan will help identify the needs, benefits, and challenges for JAC, CAMPO, and Carson City in terms of possible transportation and transit electrification,” he said. “There are a lot of questions that need to be answered before JAC is ready to begin electrification, so the process is likely to be slow as we develop the plan over the next year.”

Such a plan would mean more federal funding in play, though not guaranteed.

“It is difficult to determine how much additional money we may receive following completion of this plan,” Martinovich said. “There are competitive FTA grant programs that specifically set money aside to cover the cost of completing or purchasing low- or no-emission projects for buses and bus-related equipment, with a 90 percent federal share. While simply having a plan does not guarantee receipt of additional federal money, without this plan, CAMPO and Carson City would never even be eligible for this federal money. It’s an important step.”

JAC currently has 17 vehicles, including buses, paratransit vehicles, and one minivan.

“The current JAC fleet is made up of a combination of gasoline and diesel-powered vehicles,” Martinovich said. “Fuel is purchased similar to the rest of Carson City’s vehicle fleet; however, the cost of fuel for JAC is partially covered by FTA grants.”

Although an electrified future is within the realm of possibility, Martinovich said it’s likely JAC will continue to use fossil fuels for some time.

“The development of the zero-emission plan will help bring into focus what is envisioned for the JAC fleet going forward,” he said.

For information about JAC, visit https://www.carson.org/government/departments-g-z/public-works/transportation/jac-jump-around-carson