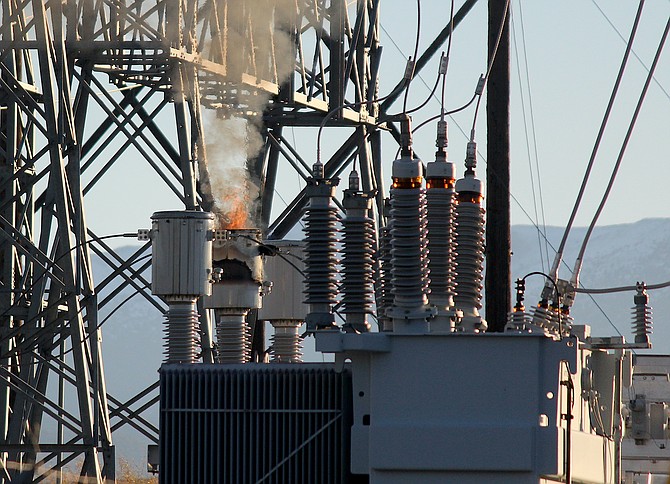 A transformer continued to burn at the Buckeye Substation more than two hours after an outage affected more than 20,000 Douglas County homes and businesses.
Photo by Kurt Hildebrand.

Power was restored to most of Douglas County by around 8:30 a.m. with just a few stragglers left from the outage that affected 21,634 NV Energy customers on Monday morning.

The outage occurred around 5:10 a.m. and appeared as nearly 500 separate outages on NVEnergy.com

Deputies reported around 5:30 a.m. that a transformer was on fire at the Buckeye Power Substation near Eastside Memorial Park caught fire.

Around 3,000 homes and businesses had power restored by 7 a.m.

It was still burning nearly two hours later as NV Energy workers were figuring out how to switch out power.

Douglas deputies and Nevada State Police troopers directed traffic on Highway 395 at the intersections with Highway 88, Buckeye Road, Gilman Avenue and Waterloo Lane, as well as the light at Highway 88 and Mottsville.

Firefighters and deputies responded to alarms across the county from Lake Tahoe to Gardnerville that were set off by the outage.

Minden residents reported that power was restored in places by 5:20 a.m.

There is no word on what caused the transformer to fail. The Record-Courier has reached out to NV Energy for more information.

A reported transformer fire in Minden may be responsible for knocking out power to 22,156 homes and businesses across Douglas County.

The outage is affecting people from Lake Tahoe to the Pine Nuts.

Reported at 5:10 a.m., a power surge set off alarms across the region, both burglar and fire.

While some places have generators, most homes in the Valley are dark as temperatures dropped to into single digits this morning.

Restoration time ranges from 7-10:45 a.m. as NV Energy workers fan out across the county.

For more information, visit www.nvenergy.com and click on outages.