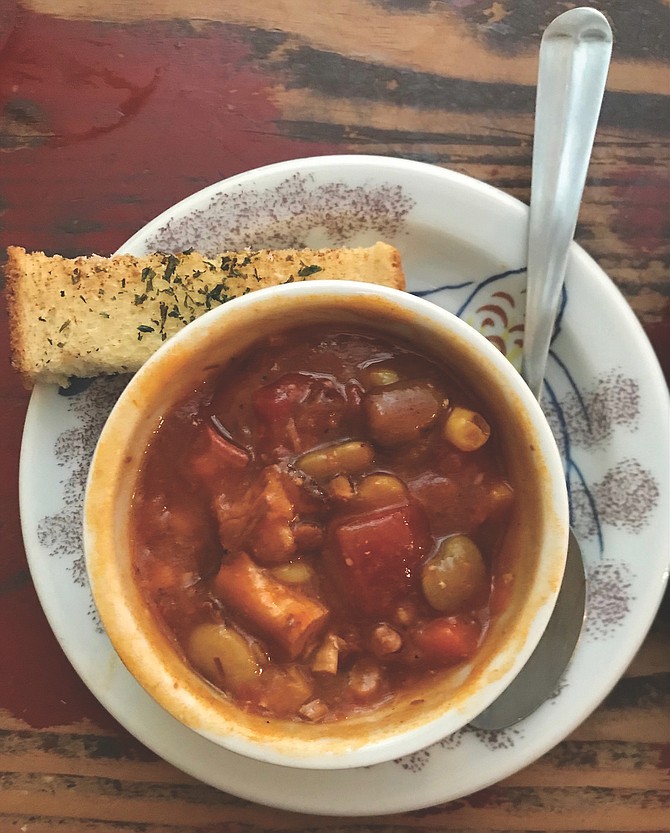 Michelle Palmer’s Brunswick stew is copied from an historical cookbook.

Brunswick stew! Chilly weather requires some rib-sticking warmness. I went to visit Williamsburg, Virginia, a few weeks ago with some culinary colleagues. I learned a lot about the 1700s culture and the foods that were eaten in the original colonies. How it was prepared in a primitive kitchen and the scullery was truly amazing.

The scullery served as an extension of the kitchen. A scullery maid or scullion boy, the lowest ranking kitchen servant, did the dirty, smelly preparatory and cleanup for the kitchen. A standalone scullery is unusual in the colonies and shows the high status of the governor’s home. The building included a loft sleeping space on the second floor for enslaved kitchen and scullery workers. I could not believe the amount of copper pots that were in the scullery.

Brunswick stew was a Colonial Williamsburg favorite traditional stew made with young fowl, beef, corn, tomatoes and lima beans. According to the 1766 informal Chowning’s Tavern “All Day Fare” menu where I dined with my friends. “When it was served, everybody agreed that squirrel, one of the finest and tenderest of all wild meats, was what made the new stew just right. Chicken is now substituted.”

We also had a dessert called Snow Eggs that was the favorite of Thomas Jefferson 1787-94 prepared by James Hemmings, Chef d’ Cuisine

4 cups corn from the cob

Simmer chicken in 3 quarts of water until meat can easily be removed from the bones, about 2 1/4 hours. Add raw vegetables to the broth and simmer, uncovered until beans and potatoes are tender. Stir occasionally to prevent scorching. Add the chicken, boned and diced if desired, and the seasoning.

Brunswick stew is one of those delectable things that benefit from long, slow cooking. It is a rule in some tidewater homes never eat Brunswick stew the day is made, because its flavor improves if it is left to stand overnight and reheated the next day.

This recipe is copied from a historical cookbook the way it was originally written.