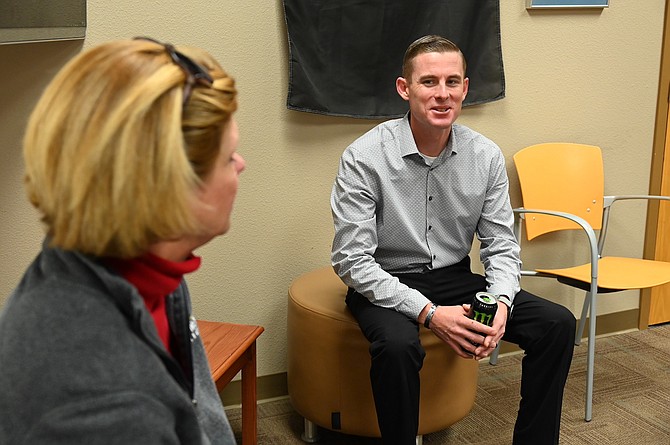 Veterans again have a place they can call “home” on the Western Nevada College Carson City campus.

The Veterans Resource Center in the Cedar Building has reopened. In the past, the center has helped many veterans transition from the military to civilian life through higher education. They have received VA resources information, education assistance, benefits consultation, work study opportunities, and more.

The VRC has served as a place they can gather to hang out with others with similar experiences and challenges.

“With so many students returning to campus this fall, the timing is ideal to provide this important resource for our veteran students and their families again,” said WNC Interim President J. Kyle Dalpe. “WNC has a great history of helping veterans flourish through our variety of degrees, certifications, workforce training initiatives and support network. We are also very proud that we have helped people who have served in the military receive up to 45 credits from their Joint Services transcript toward an AGS degree.”

After opening in 2013, as many as 200 veterans were taking classes at WNC. Strong leaders and former veterans such as Kevin Burns, Tim Galluzi, Richard Vlach and Vincent Rivera made the VRC stand out and become a resource.

Now, it’s up to Jonathon Jacobson, a combat veteran, WNC graduate and former veterans club VP, to make the Veterans Resource Center an important hub and resource on campus again. For the past couple of years, veterans have been assisted in WNC’s Counseling Services department.

“The goal of the VRC is to provide a space for veterans and their families to gather and be themselves while pursuing their personal and educational goals,” Jacobson said. “Whether a veteran or family member, they only come to the VRC as a guest once and from there they leave as a friend.”

Jacobson is motivated to help veterans succeed personally and professionally.

“My purpose as the VRC coordinator is to provide and assist student veterans and their families with institutional and non-institutional resources that will facilitate the success of their educational and personal goals,” he said. “This can range from something as simple as enrolling them in classes for the semester to something more sophisticated such as finding them a place to live.”

Jacobson served as an infantryman in the U.S. Marine Corps, including the 3rd Battalion 5th Marines — also referred to as “Darkhorse” — from 2009-15. During that time, he was deployed three times, including a combat assignment in Sangin, Afghanistan. In 2015, he was assigned to Mountain Warfare Training Center Bridgeport, Calif., where he started as a unit instructor training battalions in complex summer and winter mountain environments.

Jacobson quickly became an instructor with the Mountain Leaders Section and trained selected individuals from across all branches on military operations in a mountainous environment.

Eventually, Jacobson began looking for a career to follow his military service. He enrolled at WNC unsure of what career to pursue.

“Once I was introduced and informed of what the VRC was and what it provided, it quickly became my go-to spot on campus to study, relax and be around fellow veterans,” he said. “It was difficult for me at first to go back to school after being out of an academic environment for over nine years, but soon, after being part of the VRC, it made it way more manageable. The VRC kept me engaged with the campus and the community while I was at WNC and made me feel like I was still part of something great after I transitioned out of the military.”

Jacobson graduated from WNC in 2020 with Associate of General Studies and Associate of Science degrees. He started as a student worker in the VRC and later became vice president of the Veterans Club. He later earned his Bachelor of Science degree in Wildlife Ecology and Conservation at UNR.

“Looking back now, I can truly say that WNC welcomed me and provided many great opportunities as a student veteran while I attended the campus,” Jacobson said. “I can’t recall a moment during my time at WNC as a student that I wasn't being appreciated and welcomed into the culture here. The staff and academic coaches of WNC are why I continued my education and ultimately why I returned to WNC as the VRC coordinator.”

The Veterans Resource Center is open Monday through Friday from 9 a.m. to 5 p.m., with extended and flexible operating hours during midterm and final exam weeks.