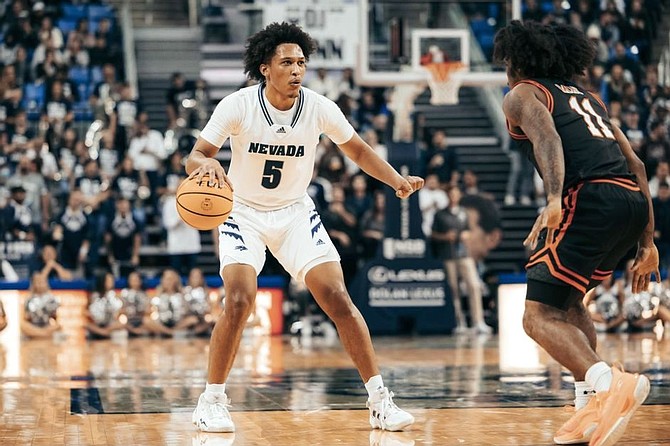 The 6-foot-4 shooting guard scored a quiet 16 points and played efficiently for 38 minutes. The Oregon State transfer opened the scoring with a 3-pointer just 17 seconds into the game but then sat back and had just four free throws over roughly the next 29 minutes of the game. His last nine points came over the final 11 minutes with the outcome never in doubt. Lucas, though, played mistake-free basketball, at least on offense. He was 4-of-7 from the field, made 2-of-3 threes and all six of his free throws without turning the ball over or even getting whistled for a foul. That is just the second time this year he’s attempted fewer than seven threes in a game (he was 1-of-3 against Grand Canyon in the second game).

Blackshear, who has taken over the point guard responsibilities from the departed Grant Sheffield (transfer to Oklahoma), turned in a highly productive and active 21 minutes. Blackshear took a team-high 10 shots (making four), hit 1-of-2 threes and was 7-of-11 from the line, equaling Lucas’ 16 points. Blackshear also had four assists and three boards. The senior scored just three points in the first half on a 3-pointer a minute into the game simply because he only played five-plus minutes before halftime. Blackshear, though, played 16 minutes in the second half and was instrumental in the Pack taking control of the game, scoring 11 points in the first seven minutes after halftime. His 3-point play gave the Pack a 32-28 lead 44 seconds into the second half. He also made five free throws in a span of just 19 seconds to give the Pack a 50-36 lead with 12:56 to play. All four of his assists came in the second half, three on 3-pointers by Will Baker, Darrion Williams and Nick Davidson.

Baker, like Blackshear, made the most of his minutes, scoring 14 points and pulling down seven rebounds with two blocks, two steals and two assists in just 24 minutes. The 7-foot junior’s first successful field goal (3-pointer) gave the Pack a 39-32 lead with 17:31 to play in the second half. He also had a dunk for a 43-33 lead with 15 minutes left and a 3-point play for a 69-49 lead with four minutes to go. Baker played just nine-plus minutes in the first half but was on the floor for the first five-plus minutes of the second half when the Pack took the lead for good.

The 6-6 freshman from Las Vegas played 34 minutes and did a little bit of everything with nine points and led the team with 10 rebounds, five assists and two steals. Williams’ main contribution on offense came on a pair of threes in the second half for a 36-30 lead with 18:15 to go and a 53-37 lead with 12:19 left. Williams, though, is quickly establishing himself as one of the best rebounders in the Mountain West at 6-6 or under. This was his second consecutive game with 10 rebounds. Three of his assists (he’s now second on the team with 19 assists) came in the first half leading to a Lucas 3-pointer to start the game, a Coleman layup for a 24-20 lead with 3:35 to go before the break and a Nick Davidson layup for a 29-27 halftime lead.

Davidson was the Wolf Pack’s only productive bench player with 13 points and six rebounds in 25 minutes. The 6-9 freshman hit a 3-pointer to cut Sam Houston State’s lead to 14-13 with 11:28 to go in the first half and then had a pair of free throws to break a 20-20 tie and a layup to break a 27-27 tie. His other six points came in garbage time on a pair of threes in the final three-plus minutes of the game. Davidson led the Pack with three threes (four attempts) and was the team’s most efficient shooter from the field overall (4-of-6). His six rebounds on Monday equaled his season high and his 13 points are the second most he’s had in a game (18 against William Jessup in the third game).

Pettigrew, a 6-3 freshman, gave the Pack an empty 16 minutes, missing his only two shots (both threes), going scoreless with just one rebound, one assist and a block. He also turned the ball over a team-high three times and was called for three fouls. Pettigrew has now gone 8-for-30 from the field (4-of-16 on threes) this year.

Powell, a 6-5 sophomore transfer from Seton Hall, also didn’t do much in his 13 minutes, going scoreless and 0-for-2 from the floor. Powell also was called for a season-high three fouls and he turned the ball over twice. The two turnovers are one more than he had over his first 82 minutes in the first seven games this year. Powell is now 3-for-15 (1-of-8 on threes) from the field this year.

Steve Alford is quickly making Pack fans forget last year’s 13-18 disaster with a 7-1 start to this rebuilding season. Alford has this team sharing the ball (17 assists on 21 field goals) and the shots (six players each had between 6-10 shots). That was even true on Monday despite a limited roster because of injuries to Daniel Foster (ankle) and K.J. Hymes (back). Alford juggled the thin roster nicely and engineered an easy victory despite five of his eight players picking up three or four fouls. Alford, of course, is still in love with the 3-pointer as the Pack attempted 25 threes and 24 twos. All eight players on Monday attempted at least one 3-pointer and six of them made between 1-3 because Alford has confidence in them.

This was a solid team effort with five players scoring between 9-16 points. This is a different Pack team than the past two years that featured stars Grant Sherfield and Desmond Cambridge. This Pack team spreads the wealth and shots around, which we saw on Monday. Sam Houston of the Western Athletic Conference was 6-0 going into Monday night but won’t be anywhere close to the best team the Pack plays this season. But this was a promising victory just the same for a Pack team coming off a tiring 3-1 road trip and playing its first home game in two weeks. The Pack did what it is supposed to do at home, taking control of the game in the second half and turning it into a blowout. The Pack won this game with defense, holding Sam Houston to 34 percent shooting (just 5-of-17 on threes) and scoring 17 points off 13 Bearkats turnovers. The Bearkats bench was just 1-of-15 from the floor and missed all seven of its 3-point attempts. The Pack will now head on an interesting three-game road trip starting Saturday against Loyola Marymount and continuing Dec. 6 at Pepperdine and Dec. 10 at Oregon, three teams with a combined overall record of 13-8 and 10-3 at home.