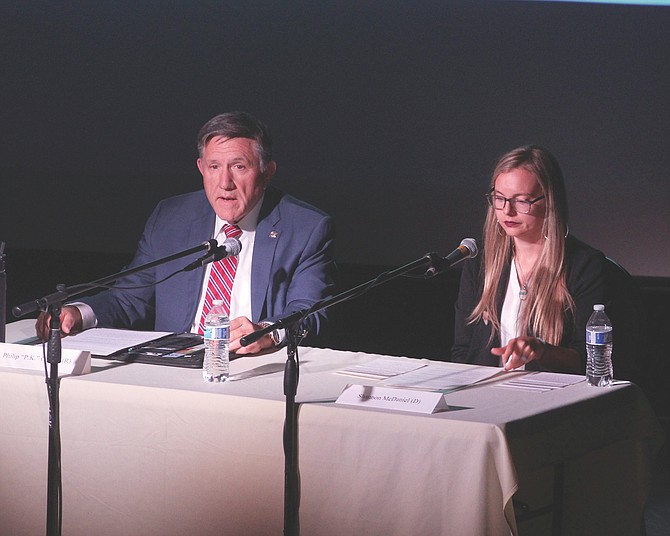 Assemblyman P.K. O’Neill, left, and opponent Shannon McDaniel discuss their most important issues facing residents in District 40 during a League of Women’s Voters forum in Carson City on Oct. 11, 2022.
Photo by Adam Trumble.

Candidates for Assembly Districts 39 and 40 met Tuesday at the Brewery Arts Center and faced an unexpected question from an audience member who wanted to know if it’s time Nevada went to annual legislative sessions.

District 40 incumbent P.K. O’Neill, a Republican, said Nevada doesn’t need a full-time Legislature, it just needs to tell lawmakers to get to work.

The discussions by candidates from those two districts were combined after Republican Ken Gray, running in District 39, declined to participate.

“I believe a lot more could get done in this state if we had more than 120 days to get the job done,” said Noble.

McDaniel said many things can change in the second year when lawmakers aren’t meeting.

“If they go every year, that could help. Important bills aren’t considered because there just isn’t time,” she said.

O’Neill disagreed. He said Nevadans should start demanding that lawmakers work Fridays and Saturdays instead of knocking off for the weekend.

Asked about election integrity, all three candidates said they believe the 2020 vote was fair.

But O’Neill and McDaniel said things could always be tightened up a bit.

McDaniel said voting needs to be accessible and people should not be denied their right to vote but that ballot harvesting could be tightened up possibly by limiting the number of ballots one person could turn in on behalf of other people.

O’Neill said ballot harvesters should be required to register so that, if there is a problem, the ballots can be traced to the person who brought them in.

Noble had a different take on the issue:

“My opponent has stated that voting is not a right. It’s absolutely a right. I’m definitely in favor of mail-in ballots.”

All three agreed the economy is the greatest challenge right now but, as O’ Neill put it, “the economy is something we don’t really have control over at the state level.”

But he said the state does have the ability to improve the business climate.

McDaniel said the state, “can work to reduce barriers to entry to attract small businesses.”

McDaniel, a licensed engineer and water surveyor, said Nevada water law needs to be revamped because, as it is now, the state doesn’t have a comprehensive plan for water and conservation is not part of Nevada water law.

On education, O’Neill said, “we need to get the parents back into education.” He said parents should choose the options for their children including which school they attend. He said money alone isn’t the answer.

But Noble said teachers are “underpaid and underappreciated.” She also called for more mental health professions especially in middle and high schools.