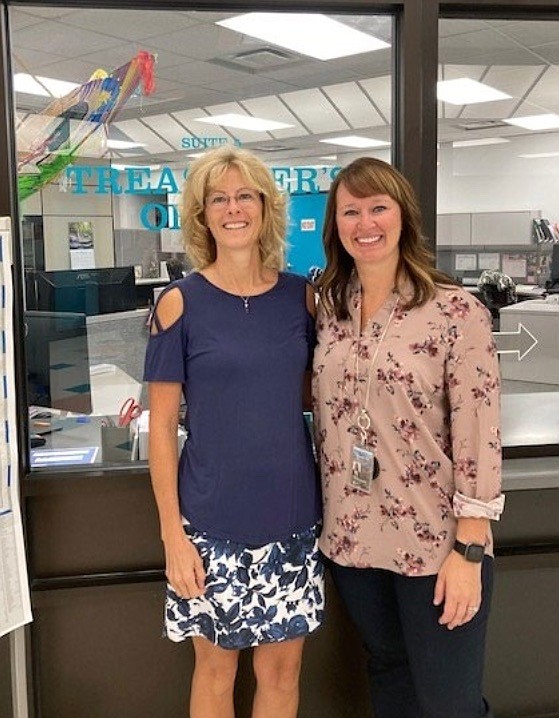 The Carson City Treasurer’s Office – responsible for tax collection – has a new chief deputy after the retirement of a veteran in the relatively small office.
After 31 years of service, Chief Deputy Treasurer Beth Huck retired from her position on Sept. 14.
“She will be sorely and hugely missed,” Treasurer Andrew Rasor said by phone Monday.
Huck began her career with the treasurer’s office in 1991 as an accounting technician under then-Treasurer Ted Thornton, according to a press release issued by the city. During her 31 years, Huck assumed six positions until becoming chief deputy treasurer under former Treasurer Al Kramer, where she continued under former Treasurer Gayle Robertson and then Rasor.
“A lot of institutional knowledge and experience have left the office,” Rasor said. “Nowadays, you don’t find too many employees who stay in the same office for 31 years. She learned everything. She knows all facets.”
Assuming Huck’s position is 1997 Carson High graduate Amber LaFollette.
“I have some huge shoes to fill,” LaFollette said by phone. “I hope I can meet the bar she set because she set it high.”
LaFollette graduated from Western Nevada College, where she made the Dean’s List. She began her career in public service with the Nevada Commission on Peace Officers Standards in 1999. She was later promoted through the ranks with the Nevada Department of Motor Vehicles and the Nevada Secretary of State’s Office until she left public service to open and operate her own business from 2006 to 2016.
In 2016, LaFollette returned to public service with the Nevada Division of Health Care Finance and Policy, where she worked as an administrative aide and management analyst. In 2019, she accepted a position as a grant analyst with Carson City Health and Human Services, where she administered numerous state and federal accounts, interlocal agreements, and revenue accounts until she transferred to the treasurer’s office as an accountant in July 2021.

Counting himself, Rasor said there are six full-time employees in the treasurer’s office, small for “the amount of duties we have.” For property taxes this fiscal year, for example, the office billed more than 19,800 parcels for roughly $57 million. And their collection rate remains close to 100 percent, Rasor said. The office also collects personal property taxes, water and sewer use fees, landfill fees, parking fines, franchise fees, rents, and the consolidated taxes from the state, such as sales tax, gas tax, and gaming tax, according to the treasurer’s website.

“A lot of that comes with trial and error, learning new systems,” he said, “but we definitely want to make sure we’re providing a quality product for Carson City and customers.”

LaFollette said she looks forward to the future.

“I’m confident in our ability to move into the next chapter and continue the best level of service for all residents,” she said.

For information about the treasurer’s office, visit https://www.carson.org/government/departments-g-z/treasurer

Commenting has been disabled for this item.