Fundraiser set up to support families of injured paving workers 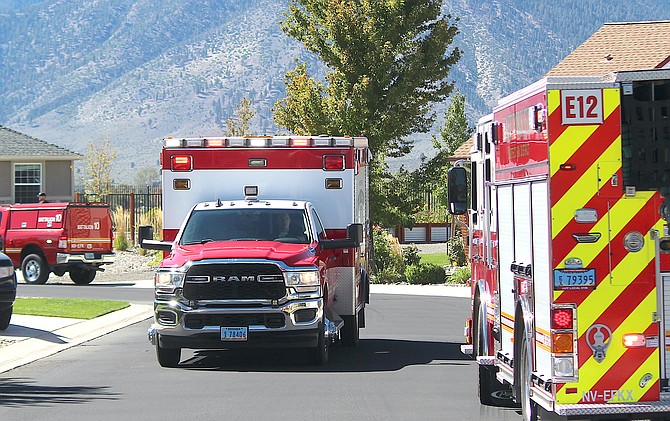 An East Fork ambulance carries two burn victims away from the scene of a truck explosion on Tuesday morning.
Photo by Kurt Hildebrand.

Four Nevada Paving workers, who were burned last week with asphalt on a job in the Gardnerville Ranchos, are all at the University of California, Davis, Burn Unit, according to their employer.

It appears the most seriously injured worker will survive. He has already undergone several skin grafts and is expected to be in intensive care for the next four months, according to Nevada Paving Business Manager Kevin Warren.

“The firefighters didn’t think the most seriously injured man would make it,” Warren said on Friday. “So far, we’re very hopeful.”

Firefighters and deputies responded to West Cottage Loop in the Gardnerville Ranchos at around 11:40 a.m. Sept. 27 to an initial report of a truck explosion which had set the workers on fire.

Described by officials as a catastrophic failure of a trailer mounted crack-sealing hot pot, the asphalt caused severe burns.

The workers were repaving the private roadway that serves the neighborhood for Nevada Paving.

Warren said two of the workers had been with the company for 20 years.

According to a Gofundme account set up for the families of the workers, they were filling roadway cracks when the equipment that heats the filler unexpectedly exploded and the men were covered in the extremely hot, sticky material.

“They suffered severe burns to their hands, arms, torsos and faces,” Warren reported. “Unfortunately, the injuries were so severe that all four had to be sent to the UC Davis burn center for treatment.”

According to the fundraising post, Cuitlahuac Magana was the most seriously injured.

“He is currently being kept unconscious most of the time because of significant burns to most of his body,” Warren said. “He has undergone several surgeries and will have many more to come, likely including the amputation of all of his fingers on both hands. His wife is by his side. She relied on Cuitlahuac for support and has no extra income to remain away from home to be with him.”

The paving company is raising money to allow her to be able to stay in Sacramento with her husband over the next four months.

Sergio Lepe, James Wright and Jesus Hernandez were also seriously injured, and will each undergo several surgeries and have extended stays at the burn center.

“Our goal with this fundraising effort is to enable family members to be able to spend as much time as possible with their injured loved ones,” Warren said in the post. “The treatment will be long and excruciatingly painful. The funds we raise will be used by the families to cover Sacramento travel and lodging expenses and to help them pay day-to-day expenses while on greatly reduced incomes.”

Like everyone else, the company is waiting for the results of the investigation.

“The equipment was well-maintained,” he said. “We’ve never had anything like this. We’re very anxious to hear the results of the investigation from the fire marshal.”

Warren said the company’s insurers will also conduct an independent investigation into the incident.

Cottage Loop was closed for most of the afternoon on Tuesday while investigators examined the scene.

Tuesday’s incident was one of the largest single industrial accidents in Douglas County since the Depressurized Technologies International plant explosion killed one man and injured four others on Sept. 17, 2001.