Pack grades: Davidson has best outing in romp over SJSU 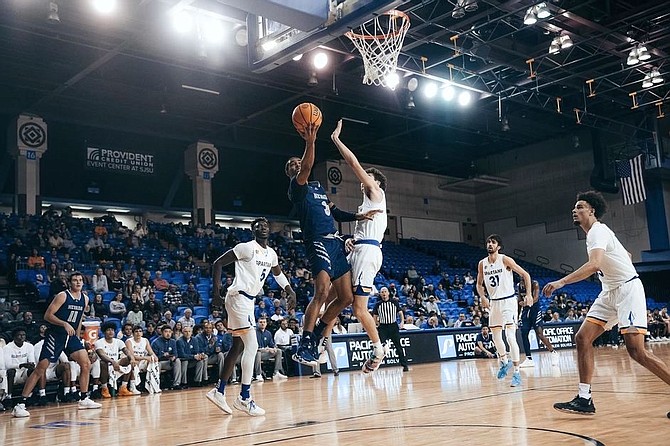 The Wolf Pack’s best shooter missed 9-of-13 shots and 5-of-7 3-pointers and scored his fewest points (12) since he had nine in the second game of the season against Grand Canyon. The Pack’s 6-3 shooting guard missed 6-of-7 shots in the first half, misfiring on his first and last three (in between he had a 3-pointer to cut San Jose’s lead to 13-7). He was better in the second half, scoring seven of his dozen points in just 12 minutes. But by then it was a glorified scrimmage. The Pack took over the game in the first half, scoring 14 consecutive points when Lucas was on the bench for six minutes to turn a 15-7 deficit into a 21-15 lead. Lucas also didn’t have an assist on Saturday after handing out a season-high four three nights earlier against Colorado State.

Blackshear contributed 11 points on 5-of-11 shooting, five rebounds, three assists and three steals. He hit a 3-pointer to cut the deficit to 15-10 and jumpstart the Pack on its first-half comeback. Blackshear played a big part in the 25-0 Pack run that lasted over the final 9:21 of the first half. But he wasn’t on the floor for all of it (he was part of the first 4:53 and the last 1:45 of the run). Four of Blackshear’s rebounds came in the first half, when he took just four shots (missing three) and turned the ball over twice. Eight of Blackshear’s 11 points came in a stretch of six minutes in the second half with the game already decided.

The 7-foot center was coming off a game in which he was literally perfect on offense, making all five of his shots from the floor and all four of his free throws for 16 points in 24 minutes against Colorado State. He then made his first shot two minutes into the San Jose State game. Perfection, though, ended when he missed a layup and a short jumper a minute apart later in the first half. He picked up his second foul with 10 minutes to go in the first half and the Pack trailing 15-7. He didn’t return until the second half and watched the entire game-deciding 25-0 Pack run over the final 9:21 of the first half from the bench. Baker then missed a couple more shots and picked up his third foul, all in the first two minutes of the second half. He did return to the floor midway through the second half as a confidence-building exercise and proceeded to score six points in just under five minutes before sitting out the final 6:31. He finished with eight points, three fouls and two rebounds in 12 minutes.

It would be difficult to prove that Coleman actually played on offense. The 6-7 guard played 29 minutes and didn’t score. He actually didn’t even try all that much to score, missing his only two shots. Coleman also had just one assist (on a Baker jumper for the Pack’s first two points of the game) and all three of his rebounds came in the first half. But coach Steve Alford likely could not care less if Coleman plays on offense at all. Coleman’s value, as always, was on the defensive side of the court. That, too, doesn’t show up all that much on the stat sheet (he had a block, one defensive rebound and no steals) but that’s because the guy Coleman is guarding doesn’t get the ball all that much. The guy Coleman guarded on Saturday (Omari Moore) turned the ball over six times, scored just 10 points and took just eight shots. Coleman then gave Moore a parting gift with 3:28 to play by swatting away one of his layup attempts. Coleman was on the floor for the first 7:20 of the Pack’s 9:21 run to close out the first half. When he was on the court during the run the Pack outscored San Jose State 17-0. Yes, he didn’t score any of those 17 points (he missed a 3-pointer), but you can be sure he was a huge reason for the zero points San Jose State scored.

You can start paying attention to Darrion Williams for Mountain West Freshman of the Year once again. The 6-6 Bishop Gorman High grad was as instrumental to this Pack victory as anyone. He scored just nine points in his 31 minutes but his two 3-pointers 3:28 apart punctuated the Pack comeback in the first half. Williams played the final 8:18 of the first half as the Pack outscored San Jose State 20-0 (he scored seven of those points) when he was on the floor. Williams also had four assists, two steals and a team-high 10 rebounds (five in each half). He pulled down an offensive rebound and immediately fed Daniel Foster for a layup and a 41-21 lead with 13:31 to play in the second half. Three of his defensive rebounds in the second half led to seven Pack points at the other end. The Pack outscored San Jose State 47-19 over the final 25 minutes Williams played.

Davidson came off the bench for 28 valuable minutes and supplied offense (15 points), defense (nine rebounds and a steal) and hustle (seven offensive rebounds). Davidson, a 6-8 redshirt freshman, set personal bests for minutes (28), field goals (six), shots (12), two-pointers (four), 3-point attempts (five), offensive rebounds (seven) and total rebounds (nine). Davidson’s seven offensive rebounds are the most by a Pack player since Warren Washington had seven a year ago (Jan. 1, 2022) in a 79-70 win over New Mexico. Davidson was on the floor for the final 10 minutes of the first half (the entire game-changing run) as the Pack blew the Spartans out of the gym. During those 10 minutes he scored eight points (the most of anyone during the 25-0 run) and had six offensive rebounds. Davidson had a 3-pointer to close out the scoring in the first half and another one two-plus minutes into the second half.

Pettigrew was also part of the Pack’s wrecking crew that was on the floor for the majority of the final 10 minutes of the first half. He played 8:21 of the final 10:06 and scored five points with a steal. His steal and dunk tied the game at 15-15 and his 3-point play gave the Pack a 21-15 lead. The Pack outscored the Spartans 20-0 while Pettigrew was on the floor in the first half. The Pack also outscored San Jose State 17-11 during Pettigrew’s seven minutes in the second half, though he was mainly an observer. All of his numbers (five points and a steal) came in the first half.

Powell played just two minutes in the first half and missed two 3-pointers. The Pack comeback started after he went to the bench with 10:06 to go in the half. Powell didn’t return to the court until garbage time, with 4:12 to go in the game and the Pack already up 58-35. He did drain a 3-pointer, pulled down two rebounds and handed out an assist in his four second half minutes.

Foster played 18 minutes and had four points, two steals, two rebounds, two assists and, yes, two turnovers. The points were his first since he scored six against William Jessup on Nov. 15 (a span of five appearances and 49 total minutes without scoring). Foster wasn’t all that instrumental to the victory. The Pack outscored San Jose State 12-0 during the six-plus minutes Foster was on the bench in the first half during the key run, turning a 15-12 deficit into a 24-15 lead. Foster then played another nine minutes in the second half and contributed two points, two assists, a rebound and a steal. Foster’s value to the Pack, though, is not found in his own stats. His value is how well the other Pack players play when he is on the court and, well, the Wolf Pack outscored San Jose State 41-22 during Foster’s 18 minutes.

Both Wigington and Flannigan entered the game with two minutes left. During those two minutes neither team scored and combined to miss five shots from the floor and four free throws, though none of the misses were by Flannigan and Wigington.

Steve Alford certainly didn’t just sit on the bench and enjoy a ridiculously easy 27-point victory in which the Pack led for the final 25:38, the last 21:45 by 10 or more points. There was nothing, after all, enjoyable or easy about the way the Pack started the game. The Wolf Pack couldn’t have played much worse the first 10-plus minutes, digging a 15-7 hole (that should have been much worse), missing 13-of-16 shots, and committing six fouls and three turnovers. But with 10:06 to play, Alford had seen enough and took Tyler Powell, Jarod Lucas and Will Baker off the floor and put in Trey Pettigrew, Tre Coleman and Nick Davidson to join Kenan Blackshear and Daniel Foster. He then solidified the comeback by putting in Darrion Williams for Foster with 8:18 to go. The result was an astonishing 25-0 run over the final 9:21 of the first half. It is, without question, one of the more impressive, dominating and unbelievable runs in Wolf Pack history. What made the run remarkable was the defense. San Jose State didn’t score over the final 10:40, missing 10 shots and turning the ball over eight times. And it was all because Alford pushed the right buttons at exactly the right time.

The offense wasn’t great. San Jose State turned the ball over an alarming 20 times and the Pack still somehow found a way to score just 67 points. Before Saturday, since the start of the 1999-00 season, a Pack opponent has had 20 or more turnovers a total of 43 times and the Pack scored 67 or fewer points in just eight of those games. The Pack offense during those 43 games averaged 82 points. The Pack shot a mundane 42 percent from the field (27-of-65), 32 percent on threes and 56 per cent (5-of-9) on free throws. The Pack offense wasn’t even great during its 25-0 run, missing 12-of-20 shots. But mundane was more than good enough on Saturday as we witnessed one of the Pack’s best defensive performances since the invention of the 3-point shot in 1986. This was just the third time since 1986 the Pack held an opponent to 40 points or less (the last time was Dec. 9, 2008, in a 95-39 win over Sonoma State). San Jose State scored just 25 points over the final 34-plus minutes. The Spartans scored just 15 points in the first half, the fewest by a Pack opponent in any half since the same Spartans scored 14 in the first half of a 54-44 loss in Reno on March 8, 2012. The Wolf Pack defense on Saturday strolled into San Jose and simply choked the life out of an opponent right on its own home floor. The Pack is now 14-3 overall, 4-0 in the Mountain West, riding a six-game winning streak and is still finding new ways to win almost every game.