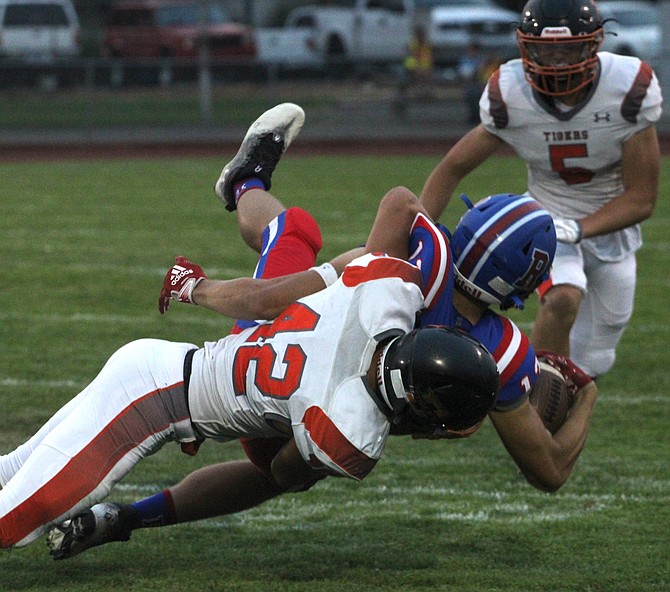 Douglas High's Cole Smalley (42) makes a tackle against Reno this past fall. The Tigers' appeal to move from Class 5A to 3A was denied by the NIAA realingment committee Monday morning.
Photo by Carter Eckl.

Douglas High School had its appeal to move its football program from Class 5A to Class 3A denied Monday morning by the NIAA realignment committee.

Tigers athletic director John Glover presented his case in front of the realignment committee in Las Vegas before being denied without a second motion, which would have allowed the proposal to proceed to a vote.

“I don’t understand them not wanting to vote. When has a vote ever hurt,” Glover said. “We didn’t even get that consideration and that’s what’s frustrating for me. We did what we thought was right by the kids of Douglas County. To not even get consideration, it’s a really telling thing by educators, principals and athletic directors. It’s really disappointing.”

As Glover finished presenting his case for the move, Lowry principal and 3A North liason Ray Parks, said that all 10 3A North schools were against the move.

“That was clearly already decided before we walked in the room,” said Douglas County School District Superintendent Keith Lewis. “It’s all convenience to them. The rubric clearly states we should move down to 3A. What was clear today is that this is territorial. It’s all about championships and not about kids.”

While Lewis and Glover both agreed the realignment process has worked in some areas, this was a clear statement in their eyes.

“I would say it’s working for whoever’s interests win,” Glover said. “In this case, the 3A North won, so it works for them. The 100 football players at Douglas High School, I would argue it worked against. Whoever’s interest is served and the political piece that it is … is the frustrating part to me. I don’t see kids as a political pawn, which is exactly what happened today.”

“It’s all about adult issues, it’s not about kids. They showed their hand today,” added Lewis.

Along with the realignment rubric, Douglas’ argument came from stats over the past two seasons.

The rubric formula laid out by the NIAA has Douglas football as the 12th out of 12 teams, including a few 3A teams, based on accumulated points.

The same rubric is in place for all realignment cases in all sports.

Douglas presented additional evidence that a move to Class 3A would be in the program’s best interest due to lack of competitiveness and low turnout numbers over the last two seasons.

In 2021, the Tigers were forced to end their junior varsity campaign early due to low turnout.

Despite the clear statistical case for a classification change, the NIAA realignment committee refused to budge.

During the meeting, members of the realignment committee openly argued about the rubric being used in some cases and ignored in others.

“I walk out of here so disappointed today. We couldn’t even get a second person to second the motion,” Lewis said. “They use the rubric when they want to. We’re not going to go quietly.”

Dayton moves to 2A independent status

There, the Dust Devils will compete at the independent level, meaning they will not get to play in the postseason.

The decision passed with an 11-0 vote by the realignment committee.

Dayton comes down from Class 3A where it has gone 1-15 over the past two seasons and was forced to forfeit its final five games last fall due to injuries and low roster numbers.

“DHS has had safety concerns competing in football in the 3A league for some time now. This fall we were permitted to condense to a JV team … three games into the season due to the high number of injuries and low number of rostered players on both the JV and varsity teams,” said Lotito.