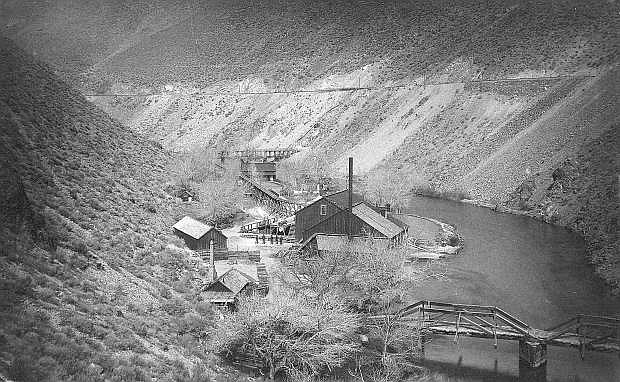 Fire, narrow escape: People were startled by the sound of the fire engines, and horrified to learn that the Ormsby House was burning. A rush was made to the scene and the premises were surrounded by an eager crowd. The firemen went up the ladders left standing by the carpenters, when a cry was heard from a servant girl named Annie. She had left her stove filled with wood, and while she was away, the stovepipe got red hot. It had set fire to some of the girls clothes. If the Ormsby House had burned, there would be no place for lodging. Every room in the hotel is occupied.

Died: Chester C., the youngest son of Mr. and Mrs. G.W. Kitzmeyer, aged 13 months and 13 days. The funeral will take place at the family residence on Telegraph street with services conducted by Rev. Geo. R. Davis.

All sorts: Soda crackers only 65 cents per box; parlor brooms 25 cents each. The City Drug Store is in the hands of Mr. Steinmetz and is being restocked for the large trade since the new manager took the helm.

Chicken show: Chicken fanciers of Reno are to have a show. The poultry game has spread to such a point that several Carsonites will exhibit at the show.

Speed limit: The Nevada State Sheriff’s Association plans to ask the legislature to consider setting a 65-mile an hour speed limit on the state’s highways. At current there is no speed limit on the open highway in Nevada. This request was meant to reduce high accident and fatality rates.

License plates: Another legislative recommendation will be that the present copper and green color combination on 1953 plates be abandoned, and that silver and blue be adopted again. It is easier for police officers to read because of the color.

A foot into it: Young Greenlaw who had just come into the post office was arranging the mail by the light of a candle and was scared out of his wits. Hearing a crash above his head he thought the house was tumbling about him, and he flew into the street with the rapidity of a greyhound with firecrackers at his tail. When he had mustered up his spirits and had cautiously put his head through the post office door, he saw a foot and part of a leg working their way up back through the ceiling. Some fellow had been fooling around above in the Ormsby House and missing his destination, had walked upon a place when the staircase used to be and went through with the crash that scared the youthful progeny of our worthy superintendent of public instruction. We have not been able to learn the name of the man-maybe woman, for the boy was too badly frightened to tell to whom the ‘tother leg belonged.

Misapprehended: Taylor’s bill prohibiting minors from entering houses of prostitution was killed in the House after a long debate. The bill was intended to cover cases in Virginia City where keepers of bawdy houses entice young girls into their resorts for commercial purposes. Six girls from Sacramento were brought into a Virginia (City) house of ill repute, the eldest not being over sixteen and the youngest but thirteen.

All sorts: The members all say the punch brewed by the Governor himself was “simply out of sight.”

In the camp: Fred Way, formerly of this city, is among the stampeders to Rochester, where he has opened a saloon (110 miles east of Reno, now an open pit mine).

Photo caption: Assemblyman Dean Heller is joined by his wife Lynn and children at the opening ceremonies for the 67th session of the legislature.

The Episcopal Hop: A deputation of ladies called on us and desired us to say that the Episcopal Hop was not to be one of those painfully fashionable and extravagantly dressy affairs which are sometimes gotten up here, but that it was to be a cozy sort of sociable the beginning of which would be in the early evening – say half-past eight, and that there was no expectation of elaborate toilettes.

In brief: Four primary classes, first and second wards, and the two at the central building, will be closed for one week, on account of scarlet fever.

A private letter received here says that as soon as the snow flies it will ensure a week’s good sleighing, and Carson will be invaded by a host of San Francisco heiresses. What a lot of masculine praying for snow will be going on now!

Grand Masquerade: A St. Valentine’s Masquerade Ball and Concert will be given at the Carson Opera House. Costly and elegant prizes will be given for the first-and second-best dressed lady and gent, third and fourth, for the best sustained character lady and gent. Fifth for the best group. The grand maskers tableau with calcium light will take place at 9 o’clock; grand march will immediately follow.

State broke from snowing: Just take a look at the snowbound sidewalks around the Capitol Building. A path six-inches wide has been worn down to the entrance during the day. It is presumed that when the legislators arrive they can walk double file and wear a path to the two houses in order to hold session.

Bighorn Sheep Hunt: Sixty-five tags will be issued for the 1953 hunt, an increase of 15 over the 1952 figures. Only citizens of the state of Nevada above the age of 18 will be eligible for the hunt. Fees for the tags are $10 each.

Geography bee winner: Danielle Hoskins, a student at the Carson City Adventist School, won the school-level competition of the National Geography Bee and a chance at a $25,000 college scholarship — sponsored by the National Geographic Society. Alex Trebek, host of “Jeopardy,” will moderate the national finals.