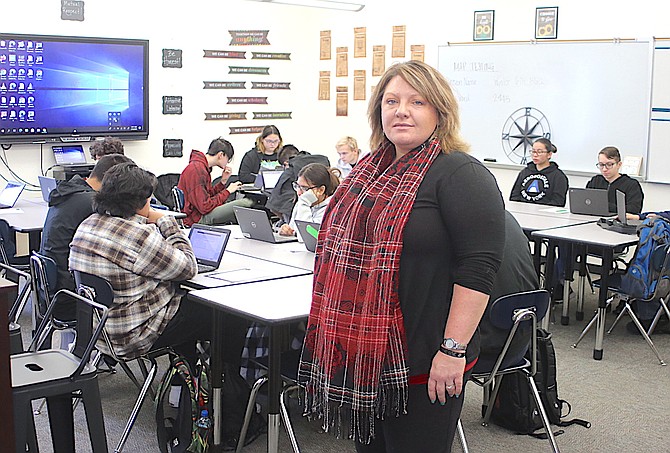 A Churchill County High School English teacher has been selected as this year’s Veterans of Foreign Wars Teacher of the Year for District 4.

Heather Benjamin, who has taught English in the Churchill County School District since 2014, will now compete against other district winners for state recognition. The state winner will be announced at the VFW’s annual convention and if selected, Benjamin will compete against other state winners. One teacher is selected from the elementary (K-5), middle (6-8) and high school (9-12) levels. District 4 consists of posts in Fallon, Hawthorne, Tonopah, Mina and Schurz.

According to Mike Terry, a Navy veteran who has shepherded many local and district teacher-of-the-year competitions, Benjamin joins an elite list of other Fallon teachers who have earned either district or state recognition including the Smart/Maher VFW National Citizenship Education Teacher Award. Churchill County High School science teacher Steve Johnson was selected for the 2017 national award.

In addition to her classroom teaching, Benjamin has been involved with professional presentations including a 2022 program, “Understanding the Military Child.” The school district and all of its schools led to Churchill County being named a Purple Star School District in 2022.

Spencer said Benjamin’s strengths are numerous, and she constantly exceeds expectations as an instructional leader.

“Mrs. Benjamin is a self-starter and consistently seeks opportunities to expand her knowledge and experience base,” Spencer wrote.

Benjamin took an interest in leadership and government at an early age and during a presidential campaign rally in Reno in the 1980s, she met and shook hands with Vice President George H.W. Bush. He had accompanied President Ronald Reagan on a 1988 campaign stop stumping for Bush. She was involved in many activities in high school and earned an award for the VFW Voice of Democracy speech contest. During her senior year, she attended the Future Leaders of America conference in Washington, D.C.

In her application, Benjamin said as a young girl she understood the price of freedom. Her father, a Marine sergeant serving during the Vietnam War, received a Purple Heart, and her brother, an Army sergeant, deployed in 2014 to Afghanistan. Benjamin, who was teaching at the time, said her brother called when he could including when she was in teaching her classroom with students. She put him on the speaker on one call.

“My students were so excited every time the phone would ring, just to talk to my brother or see pictures,” she said in her application. “While he was deployed, I organized a care box drive with my students.”

When her brother returned from Afghanistan, he visited her classes.

“When he came back from his deployment, he gave me his Nevada state flag he carried with him,” she recalled. “That flag is proudly displayed in my room as a reminder of the sacrifices our military personnel and families make.”

As an educator, Benjamin said she works with a team to ensure the military families and students are always supported. One area of support is through the high-school’s peer mentor program. The school also has Military Family sports nights and Benjamin scheduled a veterans’ barbecue for current and past military families.

“The Purple Star program is near and dear to my heart as I feel our military students and their families should always be recognized and thanked for their sacrifices for our country’s freedoms,” she stated in her application.

Before moving to Fallon, Benjamin lived in Elko County. While there, she saw a need for children in the community to have activities. She became a Girl Scout leader. By working with the Elko District and Nevada state leaders, she as able to begin a new troop.

“In 2014, I was honored with a leadership award as a Girl Scout troop leader,” she said.