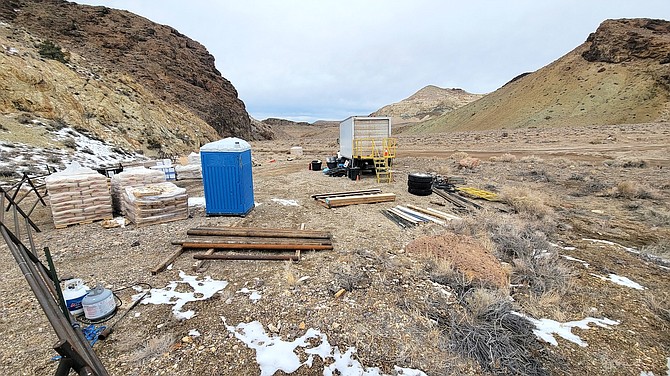 RENO — Five days after the U.S. Energy Department announced a $700 million conditional loan to an Australian mining company pursuing a lithium project in Nevada, federal land managers cited it for trespassing within the habitat of an endangered flower.

The Bureau of Land Management said in the Jan. 18 trespass notice to Ioneer Rhyolite Ridge LLC it has confirmed land was disturbed within the designated critical habitat for Tiehm’s buckwheat, a 6-inch-tall desert wildflower with yellow blooms.

The agency said the disturbance was prohibited under a permit it issued Ioneer in November to drill for underground samples at the proposed mine site still facing environmental hurdles near the California border halfway between Reno and Las Vegas.

The Bureau of Land Management said the agency’s drilling permit required any disturbance of the land occur outside areas identified as critical habitat for the plant the Fish and Wildlife Service listed as endangered last month. The mine is intended to bolster the domestic production of a critical element in the manufacture of electric vehicle batteries.

Ioneer said no plants were disturbed but acknowledged “what occurred was a violation of BLM regulatory requirements.”

“Since day one, Ioneer has instructed our staff and contractors about the need to observe all permit conditions. We are investigating exactly how this failure occurred and we will take action to assure total compliance in the future,” he said Jan. 18.

It wasn’t immediately clear if the violation could jeopardize or otherwise affect the conditional loan. The Department of Energy’s Loan Programs Office announced the loan Jan. 13 for Ioneer to pursue the project. The Energy Department said the loan was contingent on, among other things, the completion of an environmental impact statement.

Department of Energy spokesperson Ramzey Smith said Jan. 19 in an email response to a request for comment from The Associated Press that Ioneer “has made DOE aware of its BLM permitting violation related to the Rhyolite Ridge Lithium-Boron Project, as well as its intent to fully cooperate with BLM in responding to this incident.”

But Smith said “further questions regarding this matter should be directed to″ the Bureau of Land Management or Ioneer.

The bureau said it inspected the site Jan. 13, the day after it received a complaint from conservationists who oppose the mine and petitioned for the flower’s protection under the Endangered Species Act.

“The BLM did the right thing here to hold Ioneer accountable for the harms it’s caused to the buckwheat’s critical habitat,” said Patrick Donnelly, Great Basin director for the Center for Biological Diversity.

“It certainly calls into question whether Ioneer can adhere to the terms of any buckwheat protections they agree to for the mine,” he told AP.

The Fish and Wildlife Service said in listing the plant and designating 910 acres as critical habitat it was on the brink of extinction and mining posed the single biggest threat to its survival.

Ioneer has hoped to begin mining there by 2026.

Donnelly discovered the drilling staging area with a truck, water tanks, materials and explosive storage at Rhyolite Ridge on Dec. 26. That was the same day he documented cattle he said were trespassing in flower habitat.

The group filed a 60-day notice Jan. 9 of intent to sue the Bureau of Land Management to force the removal of the livestock.

The bureau has declined comment on the cattle. It said Jan. 18 Ioneer had 14 days to respond and/or present evidence disputing the drilling-related violation.

Perry Wickham, the bureau’s field manager, said Ioneer is liable for any costs the government incurred as a consequence of trespassing, fair rental market value of the trespassed lands and rehabilitation.

Failure to “resolve the trespass liability may result in further trespass penalties,” he wrote in the formal notice.

The Energy Department said the site could produce enough lithium to support the production of about 370,000 electric vehicles annually for decades. The Biden administration has made a plan for a half-million charging stations for electric vehicles a signature piece of its clean energy agenda to help accelerate the transition from fossil fuels to renewables and reduce greenhouse gas emissions contributing to climate change.

But “we clearly are not committing any capital to the project yet,” Shah told AP. “They still have to meet the conditions.”