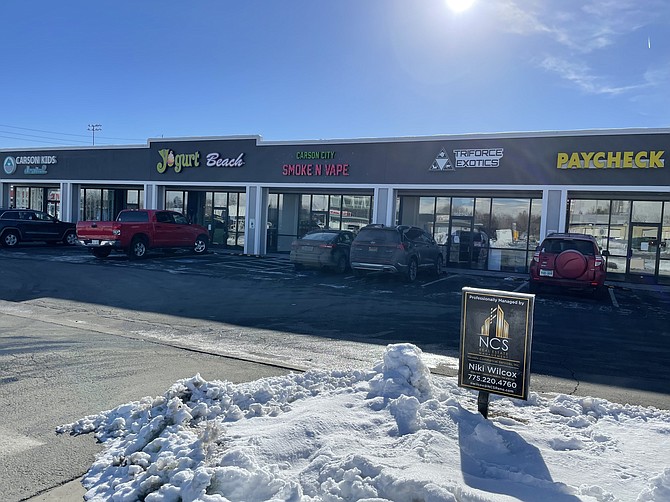 A new vape and tobacco shop in a strip mall north of the Carson High School baseball field has raised questions about regulations regarding nicotine products and schools.

“I bring my daughter to school in the mornings, and there it was,” said Carson City resident Jerome Lala. “It’s an inappropriate place to put a vape store.”

Lala said he’s lived in the community for 40 years and graduated from Carson High in 1985. He said he’s worried about his two children, who attend the high school and frequent the strip mall, as well as other kids.

“I don’t want any children using that, to be honest with you,” he said.

Carson City Smoke N Vape is located at 1621 E. William Street next to Port of Subs and Yogurt Beach. The strip mall is in the general commercial zoning district, which allows tobacco shops. Carson City has no separation requirements regarding tobacco shops and schools.

Across the street from the new shop, further north, is a Chevron gas station, which also sells cigarettes and some vape products.

A spokesperson for Carson City Smoke N Vape told the Appeal the store has never sold to anyone underage and checks IDs first thing when a customer enters. They said they obtained a business license with the city and a tobacco license with the state of Nevada and have done everything by the book, with no issues.

Unlike liquor licenses, which Carson City oversees, tobacco licenses are handled by the state, specifically by the Nevada Department of Taxation. The Nevada Attorney General’s Office handles enforcement and compliance checks.

“There is no state law in Nevada that prohibits the issuance of a tobacco license to a business located near a school,” said John Sadler, communications director for the Nevada AG’s Office.

“Our office regularly conducts random, unannounced inspections of businesses selling tobacco/nicotine products to ensure said businesses are complying with age restrictions on the sale of those products,” he said.

He said businesses are subject to inspection at least once every three years and that “our officers conduct inspections year-round.”

“Clerks who sell tobacco products to underage customers receive a civil infraction and a fine of $100 for a first violation, which increases to $250 for a second violation and to $500 for a third or subsequent violation within a 24-month period,” Sadler said. “Violators who fail to perform enhanced age-verification using scanning or other automated technology are also subject to an additional fine of $100.

“In addition to penalties assessed against the clerk, for the first and second violations the licensee of the business is issued a warning. For a third violation within a 24-month period at the same premises, the licensee receives a civil penalty of $500. The civil penalty escalates to up to $2,500 for subsequent violations.”

“After any inspection, our officers immediately notify violators,” he said. “The violating retail associates are given a copy of the civil infraction, as well as a copy of the relevant state statute and information about Nevada’s online merchant education program.”

That merchant education program can be accessed online: responsibletobacconv.com.

“The kids are into it,” he said, “the flavors and everything. Cigarettes stink. Parents can’t smell vape.”

Lala said he just wants students to be protected.

According to the Centers for Disease Control and Prevention, a 2020 study found young people who begin smoking regularly between the age of 18 and 20 will have higher odds of nicotine dependence — and a harder time kicking the habit — than those who start smoking at 21 or older.

In 2019, a change in U.S. law raised the federal minimum age for sale of tobacco products from 18 to 21. The U.S. Food and Drug Administration says it’s now illegal for any retailer in the U.S. to sell cigarettes, cigars or e-cigarettes and e-liquids to anyone under 21.
“The new federal minimum age of sale applies to all retail establishments and persons with no exceptions,” says the FDA website. For more information about Nevada tobacco licensing and enforcement, see “Hot Topics” at ag.nv.gov.