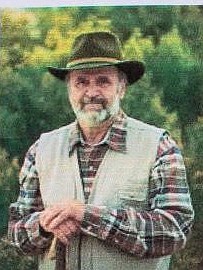 My friend died, and almost no one in Fallon knew he died, not even myself. I learned of his death through an email with his brother in Austria. My friend was an artist of world renown; his media was gold, silver, and steel. He was a gun engraver. His sculptures of animals were so life-like that one almost felt they were alive. One could see the drops of water on a Kodiak bear’s paw as it grabbed a salmon from a river. This man engraved for Kings, Queens, and Presidents of the United States, but most of all, for the average person that enjoyed art on their favorite rifle, pistol, or shotgun. His name was Franz Marktl; I last spoke to Franz about a week before he died in Fallon on July 19, 2021.

Franz was born in Treibach, Austria, on August 29, 1946. As a young man of 14, he enrolled at the Ferlach Technical School of Firearms in his native Austria. After five intense years, he graduated with the title “Graveur”. In the summer of 1970, he came to this country and set up shop at Davis Gun Shop in Falls Church, Virginia, where I worked as an apprentice studying the gunsmithing trade. Franz and I became friends. I still carry a pocket watch he engraved for me in 1972 as we drank a beer together in his shop. Over the years, we went our separate ways and lost touch with each other. But as fate would have it, we reconnected in Montana in 2003, and I persuaded him to come to Fallon and stay with my wife until he found a place to live. His brother, who loved him very much, came and stayed with my wife Kathy and me two or three times, Like all great artists, Franz was somewhat eccentric. With his passing, people from around the world will cherish, if they are lucky enough to possess his work, knowing that they have a piece from one of the world’s greatest engraver/artist.

Franz’s leaves behind a brother and his wife, a sister, and many nieces and nephews in Austria and the States. He was my friend, and with his passing, a door has closed on my life, and I will truly miss him.