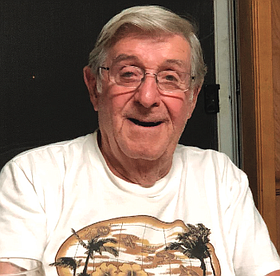 Russell was born on March 3, 1935 in Haverhill, Massachusetts. Russell served his country for 20 years including the Korean War in 1953 and the Vietnam War in 1974. During his service in the Air Force, he met and married the love of his life, Elfriede, while stationed in
Germany. He retired from the Air Force as a Master Sergeant and moved his family to Gardnerville, Nevada.

He began working for Harrah’s Tahoe in the Slot Department for another 24 years. He was generous, hardworking and overall a good man. He loved the outdoors there were many adventures traveling, camping, fishing and hunting. He was a loyal fan of the 49ers, SF Giants and Golden nights!

He will be missed but never forgotten.