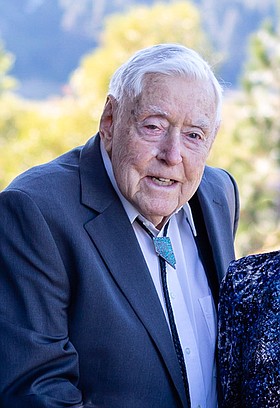 Former Carson City Mayor and University of Nevada Regent Harold Jesse Jacobsen passed away on January 29, 2021. He was 102 years old. Harold was
a survivor. His sense of humor carried him through the tough times in life. He said he wouldn’t have changed a thing about his life.

Some of his favorite sayings were:
• People need to know you care about them. • Listen to, don’t be listened to.
• Be interested not interesting. • Ask questions.
• Enthusiasm is contagious. • People believe you because you believe.
• You can’t do it sitting there - get up and get yourself going! • Think big, aim high - we all fail sometimes.

Harold was born in Elko, Nevada on October 7, 1918 to Danish immigrant Jorgen Jacobsen and third generation Nevadan Grace Crofut. He was raised on the family ranch in Diamond Valley and was a true Nevada cowboy.
At age 8, he was driving the family hay wagon. He spent countless hours in the saddle herding cattle and sheep through Nevada’s open ranges. As a teenager, Harold thought nothing of riding his horse alone 28 miles on a freezing New Year’s Eve to attend a dance in Eureka. His childhood stories and adventures of ranching in Nevada are chronicled in his book “There Ain’t No Fences.”
Harold graduated in 1941 from the University of Nevada in Reno with a degree in Agriculture. During his university years he developed his love for politics and leadership when he lobbied the Nevada Legislature to save the university farm.

After graduating, he purchased the Willow Creek Ranch in Humboldt County where he also served as Nevada State Assemblyman from Humboldt County from 1946-48. In 1949, he purchased the 102 Ranch east of Reno, and in 1950 he purchased the Jack Creek ranch in Tuscaroa.
Harold left ranching in 1955 and began his career with New York Life Insurance Company. He was the first agent in Nevada to earn both the Chartered Life Underwriter and Chartered Financial Consultant designations. He was agent of the year numerous times and a member of the Million Dollar Round Table. Harold was an active agent until his death.
Harold’s life touched many people who benefited from his years of public service. During his 12 years as University of Nevada Regent (1962-1974 and as Chairman of the Board from 1970-74) he helped to broaden opportunities for higher education in Nevada.
In 1962 there was one university located in Reno with a satellite junior college located in Las Vegas. Two years later, the Board decided to offer a fouryear degree in Las Vegas, and eventually the schools were named the University of Nevada, Reno and the University of Nevada, Las Vegas. During his 12 years as Regent, a two-year medical school was established in Reno and plans were made for a law school in Las Vegas.
Of all of his accomplishments, Harold was most proud of Nevada’s community college system. He bragged he was in the top six of the six graduates of Eureka High School in 1937. He understood the challenges students have coming from small rural communities to a large university campus. When he became Regent only 30 percent of the first-year students were continuing on to earn four-year degrees so he decided he would work toward a junior college system for Nevada.
He led the way - lobbying university officials, legislators and community leaders. He even worked with Howard Hughes’ representatives to have $300,000 donated for the establishment of a community college in Elko. He also lobbied Carson City legislators and city leaders to have 200 acres of state land transferred to the Board of Regents for the creation of the Western Nevada Campus in Carson City.
As Mayor of Carson City from 1976 through 1984, Harold’s goal was to plan ahead to keep Carson City a solid community. To that end, he worked to diversify the economy so the city wouldn’t be entirely dependent on the state worker base. Many manufacturing jobs were created and shopping centers and fast food restaurants were brought in. He also worked to create a master plan that limited the growth rate to three percent per year. He made sure the city could acquire enough water rights so the population could double from the 35,000 residents it had in the late 70’s. And, he began planning for the Highway 395 bypass.
In 1980 Harold was recognized as a Distinguished Nevadan. The Nevada State Legislature issued a proclamation on April 19, 2013 as a day to honor his service to Nevada.
Most importantly, Harold was a “Daddy” to his five daughters and Grandpa to his grandchildren and great grandchildren. He wanted his girls to have higher educations, and all five graduated from University of Nevada schools. He loved Nevada and was a hands-on father, teaching his daughters to appreciate nature. He taught them how to ride horses and how to waterski on Lake Tahoe. He encouraged them to be outside taking them sledding, on hikes up C Hill and to the waterfalls in Kings Canyon and on many adventures to rural areas of Nevada.
Harold is survived by his wife Alice Casazza Jacobsen, daughters Cheri Jacobsen Adams (Lex), Ardis Jacobsen Mohrschladt (Henry), Loni Jacobsen Wolf (Roger), Jo Dee Jacobsen, and Marla Jacobsen and stepchildren Kym Corporon Jacobson (Dave) and Marc Corporon (Cynthia Crawford M.D.) He has 20 grandchildren, 25 great grandchildren and numerous nieces and nephews. He was preceded in death by his first wife Josephine Askey Jacobsen in 1981, his brother Floyd “Jakey” Jacobsen and sisters Katrina Gardner, Elizabeth Oxborrow, Vera Purinton, and Vida Crawford.
A mass and celebration of life will be held Friday, February 19 at 1:30 p.m. at St. Therese of the Little Flower Catholic Church in Reno. Services will be live streamed on the church’s website at https://www.littleflowerchurchreno.org.
In lieu of flowers donations in his memory can be made to the Regent Harold Jacobsen Scholarship Endowment by sending checks payable to UNR Foundation, Mail Stop 0162, Reno, NV 89557.