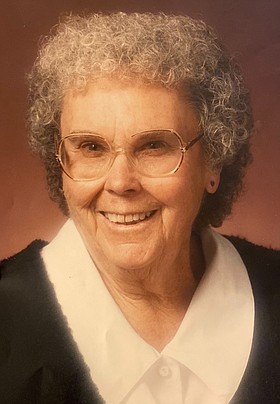 Barbara was born April 7, 1924 and passed away February 12, 2021 in Bishop Ca. Barbara was born to. Albert (Bob) & Carrie Wonacott in Bishop, Ca where she grew up on the family Dairy Farm, with her older siblings Thelma, Thomas and Archie.Barbara began her career as an operator at Contel Full time after High School. Later she married Horace (Doc) Evans and had her two daughters Nita & Leslie. She later married Fred Dawson where they bought a restaurant and later sold & bought Diamond A Rodeo Company.In 1985 Barbara moved to Gardnerville with her daughter Nita, where she retired from Contel & worked at CVI for 20+ yrs. She spent most of her time watching her granddaughters show livestock or at a sporting event. Barbara always had a smile on her face & a kind word for everyone she met. She will be missed by many as she touched many people’s lives.She is preceded in death by her mother & father Bob & Carrie Wonacott, sister Thelma and husband Roy Brown, brothers Thomas & Kathleen Wonacott, Archie & wife Lenore Allison, nephews, John & Bob Summers.She is survived by her daughters Nita Vick & Leslie & Andy Richard, granddaughters Shea & husband David Brown & Skyler Zulian, Jim & Nita Summers as well as numerous great nieces and nephews.
Graveside services will be held on February 20, 2021 @ 11am at Pioneer Cemetery in Bishop, Ca, a celebration of life will be held in Gardnerville at a later date