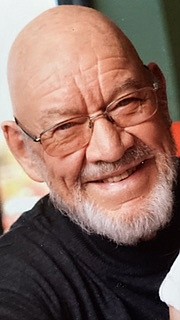 1924 - 2021
On Sunday, February 7, 2021, William “Bill” Steward, loving husband, father and grandfather, passed away at the age of 96. Bill was born in Selma, CA in 1924 to William Henry Steward and Eva Ruth Steward. Bill was a proud veteran of the United States Navy, where he served his country for 22 years and three wars—World War II, Korea and Vietnam. Bill retired from the Navy with the rank of Chief Petty Officer and continued his public service working for the State of Nevada at the Department of Employment Security.
Bill was married to his beloved wife, Roberta, for 50 years. They raised their three daughters in Salt Lake City, UT and Carson City, NV. Bill and Roberta were passionate travelers, spending their golden years exploring every corner of the United States in their travel trailer and the world on cruise ships. It was not unusual for Bill to get in his convertible and drive across the country to attend a wedding or graduation. Bill’s passion for travel culminated a few months before his 92nd birthday when he, along with more than 25 of his fellow World War II veterans, took their Honor Flight to Washington, D.C. Bill was an avid reader who never met a book he didn’t like and he passed on his love for travel and reading to each of his daughters. Bill’s e-cards were legendary—he commemorated every holiday and never forgot a loved one’s birthday.
Bill was preceded in death by his parents, his wife, Roberta, and his sister, Charlotte E. Cassidy.
He is survived by his three daughters, Donna (Nick) Angiolillo of Chino Valley, AZ; Linda (Chris) Beck of Surprise, AZ; and, Joan (Bob) Byrd of Surprise, AZ; his grandchildren, Allan (Julie) Byrd of Elkton, FL; Sandi Byrd of Chicago, IL; Bill (Katie) Steward of Phoenix, Arizona; Stephanie (Troy) Herrera of Reno, NV; John (Danae) Beck of Reno, NV; and Vikki (Mike) Heddens of Chino Valley, AZ; and his great-grandchildren, Christopher Barela, Samantha Herrera, Gianna and Grace Beck, Carlee Taggart and Anslee Byrd.
Bill leaves behind a huge hole in the hearts of each of his family members along with the countless people who called Bill their friend or considered him a surrogate grandfather/uncle/father.
Bill’s family will celebrate his life when they are able to safely gather. Donations in Bill’s memory can be made to Honor Flight Nevada, P. O. Box 21123, Reno, NV 89515.