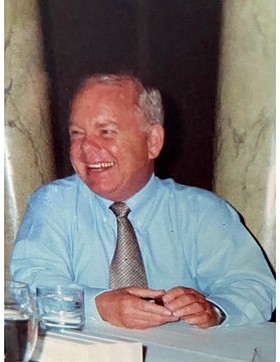 Clifford A. Dunseth of Carson City, Nevada
passed away from complications resulting
from a stroke on February 17, 2021.

Cliff was born on May 21, 1945 to
Marguerite and Clifford C. Dunseth in Bakersfield,
California. He grew up in West Covina and graduated
from West Covina High School in 1963. Cliff was the
beloved older brother to his sister Bonnie L. Parnell,
just 13 months apart. Cliff loved his family, camping
with his lifelong friends and giving his time,
attention and help to anyone when needed.

Cliff graduated from UCLA with a degree in history and
participated in ROTC. After graduation, he became a
member of the Army Reserve and later went on to work
for the Department of the Army as a civilian. He then
became the Health and Safety Manager at numerous
Army bases across the United States and Germany.
After completing Nuclear Weapons Training School,
he became a chemical and explosive safety expert
with the Army in Europe and oversaw the demolition
of chemical weapons on Johnson Island. In the
mid-90s, he served at the Pentagon and assisted
with the Chemical Weapons Convention.

After retiring form the Department of the Army,
he worked in The Hague, Netherlands, for the
Organization for the Prevention of Chemical Weapons.
While there, he traveled the world to instruct countries
on chemical and biological weapons safety.

Those who knew Cliff best would say that his life
was never about Cliff…he was always focused on
others – helping his sister no matter the ask, helping
to put his nephews through college, playing cards
with his grandnieces, sharing his world travels with his
grandnephew, shoveling snow for neighbors and so on
and so on. He also had an insatiable interest in just about
everything – Bluegrass music, any period of history,
Dodgers baseball, UCLA basketball and recently became
a ham radio operator with privileged General status.

He was well loved and is survived by his sister,
Bonnie Parnell, his nephews Charley Parnell (Leslie),
Andrew Parnell (Shelley) and his grandnephew and
grandnieces Jackson, Laine and Hadley as well as
many who call him mentor, neighbor and friend.

No services are planned at this time.
Donations in Cliff’s name can be made to
The Northern Nevada Food Bank, Wounded Warriors
Project or the Nevada State Museum.